The Little Mermaid on steroids
'Aquaman' plays to 13-year-old mindset – and what's so wrong with that? 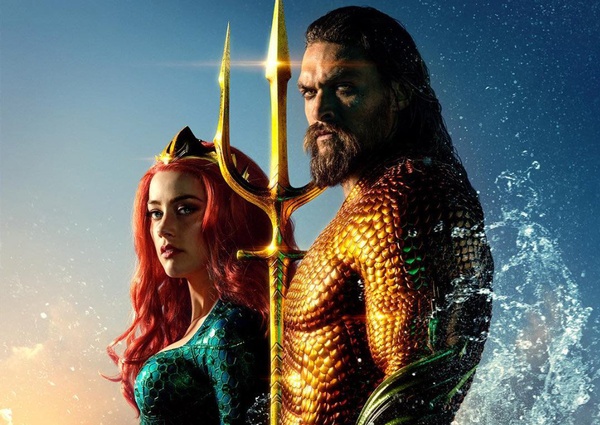 Maybe DC will be able to right the ship after all. “Aquaman,” which was directed by James Wan, who made his name on horror films like “Saw” and “Insidious,” is a clear step away from the dour tone of previous movies in the DC Universe (“Wonder Woman” excluded.) Zack Snyder has been either promoted or demoted to executive producer, and I much prefer Wan’s style to Snyder’s. The gloom and darkness is gone, as are the fight scenes punctuated by crunching bones. “Aquaman” is bright and energetic, full of exciting visual panoramas, and a lot of fun.

Jason Momoa plays the titular character, and watching him reminds me of watching pro wrestling bouts. There’s that sense of goofy violence, that smirk and showmanship in his performance. He’s charismatic, covered in Polynesian style tattoos, and he doesn’t take himself, or the movie, too seriously. There’s not a lot of humor in “Aquaman,” but when it pops up, it’s provided by Momoa, whose timing is great. Watch out, Dwayne Johnson; Momoa’s vying for your place in the sun.

“Aquaman,” or Arthur, is the progeny of a lighthouse keeper and the queen of the sea (Nicole Kidman,) who returned to her oceanic realm when he was young in order to protect him. She submitted to an arranged marriage, bore a son to the evil king, and now that son (Patrick Wilson) is Evil King 2.0, unfortunately named Orm (no wonder he’s mad all the time.) Casting Patrick Wilson in this role was a mistake; Wilson excels at playing men who look the part – tall, square jaw, muscular – but are crippled by self-doubt and fear. He made a lot more sense as Nite Owl in “Watchmen.” Here, he’s limited to a glower and a lot of expositional dialogue.

Orm wants to unite the various underwater kingdoms and launch a war against the landlubbers because of all the garbage they’ve thrown into the ocean over the years. Wan decides not to lean into this environmental angle, unfortunately. There’s supposedly a garbage patch twice the size of Texas floating in the ocean that would’ve made for a great setting for a superhero battle. He instead delivers scene after scene that look like they’re from the live-action remake of “The Little Mermaid.” Not that I’m complaining. This is a movie to see in 3D, or IMax if you can – there’s a lot to look at.

While Orm attempts to unite the underwater kingdoms, Arthur, who doesn’t really give a damn about anything but beer and motorcycles, is sought out and convinced by the king’s advisor, Vulko (Willem Dafoe, looking even weirder than usual with a man-bun) and Mera (Amber Heard), a beautiful redheaded mermaid, to try and stop the underwater king’s vendetta. Vulko is an old friend of Arthur’s, he’s the one who trained him in the ancient tradition of trident-fighting. It’s not clear why they care about the surface world, or how they convince Arthur to care. Up until that point, he seems like the kind of guy perfectly content to let the world burn around him. But this isn’t the kind of movie that’s going to invest a lot of time and energy into character motivations.

Another underdeveloped theme in “Aquaman” is the subject of Arthur’s biracial identity. While he feels conflicted, like he belongs in neither world fully, Mera and Vulko are convinced this is a gift; he can bridge the two worlds and bring peace. It feels like DC is checking off a list of politically relevant themes here without really digging into them, which is too bad; a slightly different movie might have commented on the themes of racial purity that are present in both “Wonder Woman” and especially “Black Panther,” adding an important nuance to the conversation about racial identity we seem to be having these days via superhero movies.

But maybe we’re all just really tired of our fantasies being invaded by political and cultural realities and complex questions. Cinema is supposed to be a place for escapism, right? The action sequences in “Aquaman” are kinetic and exciting, largely because there’s hardly any cutting from one scene to another. Wan has diagrammed everything out so that he can switch between parts of a battle without switching camera angles. Physical stunts employ clever editing to disguise the limits of frail humans doing really dangerous things. Wan recognizes that if everything is being done on a computer, those camera tricks aren’t necessary any more, and action scenes can be edited entirely differently. That level of thought and care pays off. If I’m going to watch CGI creations battle other CGI creations this is the way I want to watch it.

In order to stop Orm, Arthur must go on a quest to recover a long lost golden trident, which, like a certain sword in a certain stone, will only be granted to the true king. Once he finds it, we get the supremely weird sensation of hearing Julie Andrews, a week after deeply feeling her absence in “Mary Poppins Returns,” as a gigantic, telepathic sea monster.

“Aquaman” is without a doubt a movie designed to thrill and entertain 13-year-old boys, and to sell merchandise. DC continues to fail to give a more mature audience anything more interesting or nuanced to notice or enjoy, the way that Marvel often does. At this point, I’m wondering if that’s intentional. I don’t hold it against them. Based on DC’s box office performance, a lot of us enjoy movies that make us feel, for a moment or two, like a 13-year-old boy, and for me, “Aquaman” succeeds at that. It’s forgettable, empty of meaning, a bit of fluff and stuff that will be gone before we even notice. I’m fine with that. It’s a film about a superhero who can breathe underwater, after all. But at least it’s not all dark and tortured and gloomy.