Tripping Out on the Hallucinogen Wall

The year was 1980. Disco had run its course, John Lennon left us with a hole in our hearts, and Mount St. Helens blew her top. And a few scrappy western-slope climbers made the Montrose Daily News. These were no ordinary climbers. And the Black Canyon of the Gunnison was no ordinary climbing venue. When Ed Webster, Bryan Becker, Bruce Lella (formerly of Durango), and Jimmy Newberry emerged onto the canyon’s North Rim after spending a full week scaling one of Colorado’s tallest, blankest walls, they were met by a news crew and a small, cheering crowd. Having consumed their food days before, along with a supply of magic mushrooms, they were not a pretty sight. Their climb was one of the era’s boldest, and their new route became known as the Hallucinogen Wall. Today, this route still packs a punch, although with the advancement of modern climbing gear and safety hardware, it is much more accessible, and honestly, quite enjoyable if you are into that sort of thing. Here’s a look at a recent voyage up a historical route in Colorado’s Black Canyon of the Gunnison National Park. 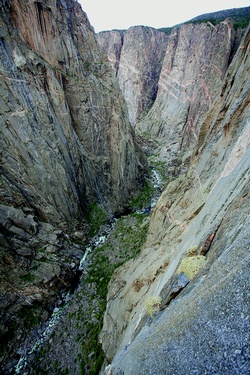 The Gunnison carves its way through the Black Canyon 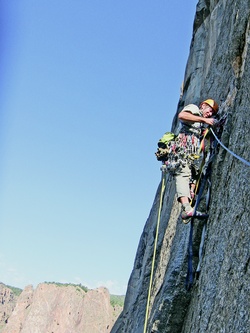 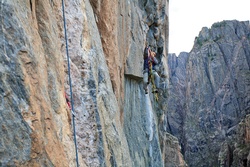 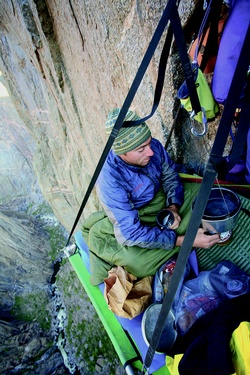 Allen Rilling brews up instant coffee from a hanging camp

Rilling nearing the top of the Hallucinogen Wall