A moving experience
Video artists share their vision at the DAC 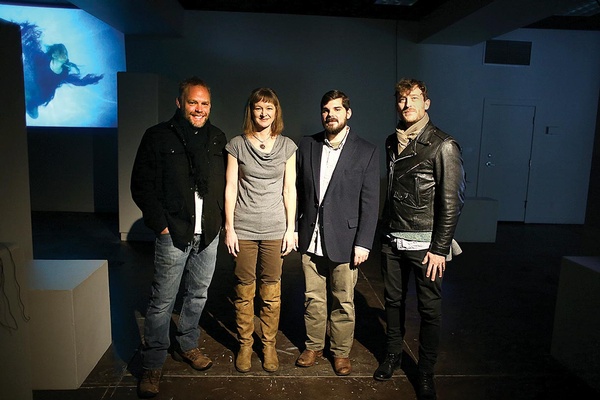 These days, we’re bombarded by pervasive moving images on the internet, television and big screen, often to the point of becoming numb. However, in the hands of talented artists, video can still be enlightening, entrancing and entertaining. And now, more than ever, videography is an accepted, legitimate form of art. Fortunately, local audiences have an opportunity to view 13 superlative examples of the genre with the Durango Arts Center’s latest exhibit, “Vision All Together.”

The use of video as an art form was pioneered by Korean-American artist Nam June Paik more than 50 years ago. In essence, Paik took advantage of what at the time was new technology, the portable video camera, to create his imaginative works. Today, with the advent of improved technology, the genre has evolved into two types: single-channel and installation. Single-channel techniques are analogous to television, where a video is shown on a screen or projected as a single image. Conversely, installation pieces can incorporate an environment; several different pieces of video presented separately; or as combinations of video and traditional media, the latter of which tends to be the most prevalent form in use today.

“Vision All Together,” the first DAC show for 2017, is also the first selected by new Exhibit Director Peter Hay. Hay is a long-time fan of contemporary art forms and says he saw the current show as an opportunity to flush out his curiosity and offer something fresh to the community. Hay admits he is not an expert at the intersection of performance and filmmaking and therefore chose Georgia-based artist and filmmaker Adam Forrester to curate the exhibit. “Forrester is an artist working in the field through his own performance video art and (also) as a curator of other moving image exhibits,” remarks Hay.

For this particular presentation, Forrester said he selected videos about artists who have influenced him in his own work. “Overall, I wanted to bring together artists at different points in their careers, from emerging to established,” he explained, “I wanted to bring together work that incorporated elements of humor while also providing viewers with meaningful content.”

The videos on display vary in length from 50 seconds to 15 minutes. They are different in subject matter and portray each filmmaker’s unique perspective. The videos provoke, stimulate, amuse and entertain, and – just as importantly – will likely provide viewers with a new appreciation for the medium.

For instance, the work of two local contributors, Scott Rhea and Stacey Sotosky, could not be more different from each other. Rhea’s “Underwater Installation for Flux,” almost five minutes in length, is hauntingly beautiful and mesmerizing. Taking full advantage of water and its dynamic properties, Rhea incorporates slow motion that emphasizes the effervescence of liquid in motion and also utilizes undulating fabric as it enrobes his female subjects. In addition, he created striking visual effects utilizing fascinating kaleidoscopic imagery.

Sotosky, an FLC assistant professor of journalism and multimedia studies, previously exhibited at the DAC in the group show “Pivot Points” (2015). Her academic awareness of mainstream media issues was the primary catalyst for her “Vision All Together” entry. Endlessly assailed by the constant images of Obama, Sanders,

Clinton and Trump, Sotosky recognizes that their body language is even more compelling and compiled four side-by-side film clips of hand gestures and physical movements. By eliminating the sound of their voices Sotosky has made an exceptional statement about style and presence. It is the first time her video has been shown anywhere.

Guyon’s five-minute “WW” is something of a surrealist experiment and might well give a shoe fetishist a heart palpitation. While on the subject of shoes, Lamson’s “Hunt & Gather” gives an altogether different perspective on the footwear often seen wrapped around telephone wires in inner cities; it is intriguing as much as it is whimsical.

Scaduto’s “What We Call Ourselves” is a three-minute comment on childhood loss of a sibling and is poignant and unique in its presentation. The

collaborative team of Mayer and Leyva produced “I Am Your Grandma” a 15-minute piece that is amusing, disturbing and somewhat obscure in its intention, but also quite imaginative. McElroy’s “A Woman Runs Through a Pastoral Setting” is only 50 seconds in length but may well be the most surprising of all. Viewers will likely want to watch it again and again.
Attendees entering the Barbara Conrad Gallery will discover nine 50-inch flat screen monitors with head-phones, as well as four projected images. It is a different experience than viewing two-dimensional art. “Viewers would probably get the most enjoyment out of the work by going at their own pace and be willing to spend a little more time viewing the work than one might be accustomed to for static pieces,” Forrester suggests. “Most of the videos do not have a traditional narrative, so a viewer could enter at almost any point during the length of the piece.”

Hay said he conceived the exhibition as a “Festival of Video” and augmented it with lectures and a two-day video workshop presented by Forrester and Sotosky.

“Vision All Together” is a great start to the 2017 DAC season, as well as an indication of what the community might expect from Director Hay.