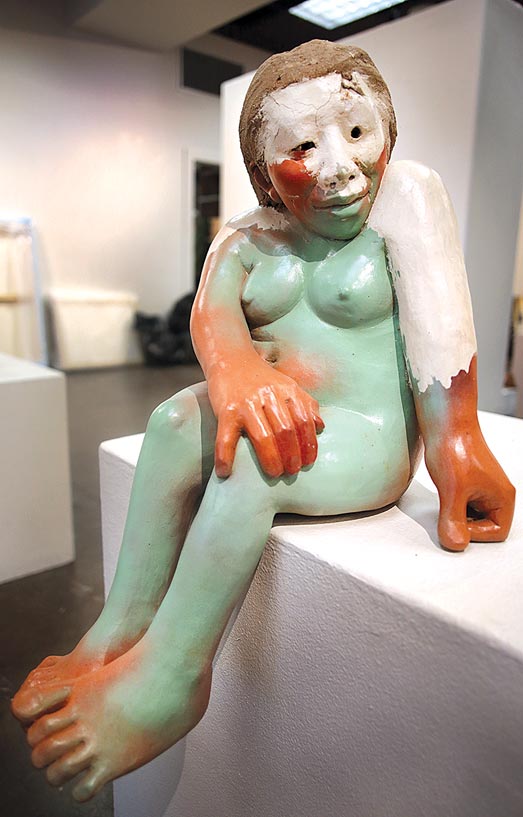 "All My Parts" by Roxanne Swentzell./ Photo by Jennaye Derge

When Peggy Zemach was executive director at the Durango Ar ts Center (2012-14) one of her goals was to engage the Native American population and capitalize on our area’s history. Her legacy continues with the current exhibition, “Exploration Beyond Tradition,” a contemporary Native American artist’s invitational.

As curated by Farmington painter and photographer Michael Billie, the exhibition goes beyond the culturally recognized indigenous crafts of weaving, pottery and bead work. For the show, Native American artists from around the country were invited to exhibit their extraordinary talent.

Billie, who is Navajo, received a threeyear grant in 2015 from the Navajo Artists Technology Innovation & Vision Enterprise (N.A.T.I.V.E) and set out to help fellow indigenous artists in the Four Corners. He explained that the grant’s main purposes are to provide workshops, fund events, and help Native artists gain exposure beyond the Southwest and introduce them to selling online.

In 2016, Billie approached former DAC Exhibits Director Mary Puller to see if he could arrange an exhibition that showcased regional talent, and she agrees. “I didn’t know all the artists,” said Billie, “but I started emailing invitations to see who was interested, and to my surprise the majority of them were. We wanted a variety, with a mix of the up and coming, and the famous. The majority, it turned out, are Navajo and Santa Clara Pueblo.”

As an added benefit to the arts community, Billie will be offering two, all-day encaustic workshops June 10 and 11. Encaustic painting, also known as hot wax painting, entails working wit h bees wax mixed with resin and natural pigments. His workshops will deal with “eco-printing,” which he defines as the transfer of pigments from natural plants onto paper or fabric. On day two, he will demonstrate how to integrate the encaustic process into what was learned the previous day.

In addition to Billie himself, another of the 12 artists participating in the show is Baje Whitethorne Sr., considered among the most prominent watercolor artists working today. His art has been featured in venues and in collections all over the world including The Smithsonian, The Field Museum and Museum of Natural History Santa Barbara, Calif. Whitehorne’s paintings provide a window into life on the reservation and its stark beauty, leaving an impact on how people think of the Southwestern landscape.

Another of the show’s exhibitors is Preston Singletary, whose work is represented in galleries throughout North America, most notably in Santa Fe, Seattle, Massachusetts and in Vancouver, B.C. The work he is showing at the Arts Center was created specifically for the show. The Seattlebased Singletary is a glass artist with expertise honed at the famous Pilchuck School, an international school for glass art, located north of Seattle.

“I eventually adapted (Pilchuck) techniques to interpret my cultural background, which is Tlingit,” he explained of his background and evolution as an artist. “Growing up in the Seattle region, outside of the traditional community, I had to find teachers and mentors to more intimately understand the Native designs and my own culture.”

Singletary’s work expands on traditional native materials, and he believes glass brings a new dimension to indigenous art. “It is now being embraced as a new material,” he said. Fellow exhibitor sculptor Roxanne Swentzell lives in the Santa Clara Pueblo and owns a gallery in Pojoaque, N.M, north of Sante Fe. She said she is excited to be showing somewhere new. “I love Durango, so I’m looking forward to coming to the opening,” she said. Swentzell also shows at the Heard Museum in Phoenix and the Four Winds Gallery in Pittsburgh.

James Joe, of Shiprock, has been an artist for 40 years and works in mixed media, as well as lithography, silk screen and sculpting in stone and wood.

Shan Goshorn, of Oklahoma, has been an artist for more than 30 years and is a formally trained painter, photographer and silversmith who studied at Cleveland Institute of Art and the Atlanta College of Art. “But,” he admits, “I taught myself the art of weaving baskets in the traditional style of my tribe, the Eastern Band Cherokee.”

He is currently working with paper weaving. “For this exhibition,” he explained, “I am using traditional basketry techniques, but showing the contemporary relevance to the people of today.”

This being the final year of his grant, Billie will also be putting together a tour to visit New Mexican artist’s studios from Aztec to Teen Nos Pos. “I’m also working with Sara Black’s Southwest Gallery in Bernalillo to hold the first annual Bernalillo Native Art Market in May, with well over 40 artists already signed up.”

An opening reception will be held in the Barbara Conrad Gallery from 5 – 7 p.m., Fri., April 21. The exhibit will be on display through June 17. There will be an artists’ talk by Sally Black and Gloria Emerson at 6 p.m. Sat., May 20. The diverse work on view in this show is a testament to the heritage, skill, talent and vision of the artists. 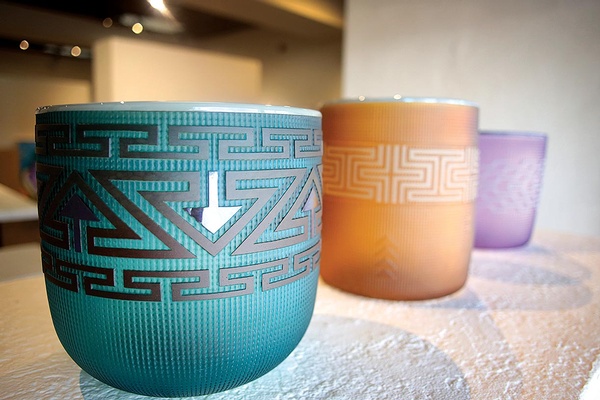 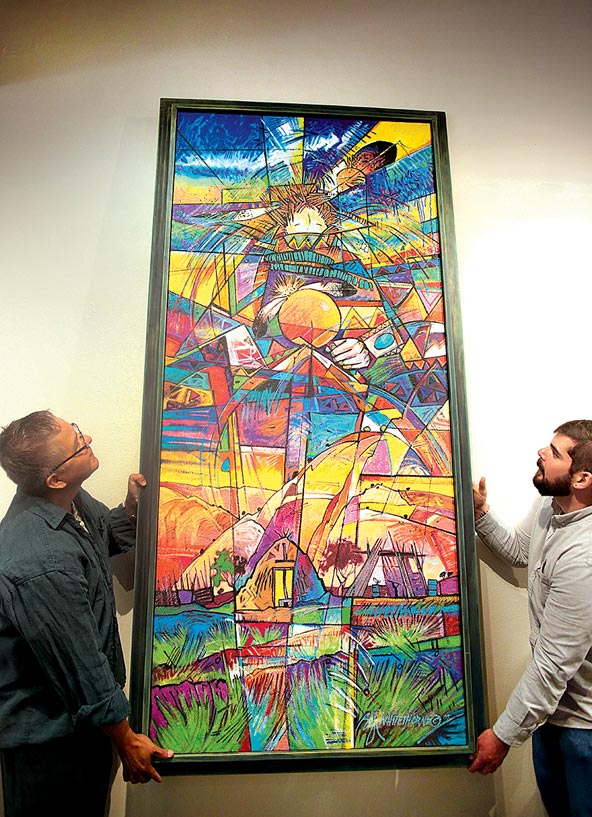 What: “Exploration Beyond Tradition,” a contemporary indigenous artist invitational