On a bluebird spring day in 2001, babes in bikinis and dudes in cut-offs flaunted their pale upper thighs on the beach. Not the sandy beach of Cozumel, mind you, but the white-corn Beach of Purgatory Resort, in the heart of the San Juan Mountains.

As tallboys were sipped and skin crisped by the sun, revelers hooted and hollered with the spirit of spring as their unified anthem. Not a care in the world was had by this unsuspecting group of innocents, for little did they know an epic flood was coming their way.

That fateful day 16 years ago was the first known occurrence of Purgatory constructing a water feature for skiers to utilize in the vernal American tradition known as “pond skimming” – a competition where participants ski or snowboard into an icy pool with the intent of skimming across it to the other end.

According to anonymous sourcing leaked from the Purgatory organization, a design flaw did not put emphasis on placing the appropriate liner along the bottom of the pond. It was an unfortunate oversight by pond builders, not to mention for the debut skimmer Mach 10ing toward the pool.

As spectators turned their eyes upslope cheering boozily, the poor guinea pig left the snow and hit the pond, dragging a ski through the tarp on the bottom, busting the ill-suited material and swiftly sending 50,000 gallons of water onto the Beach. Scantily clad onlookers were ankle-deep in water, and soggy hot dogs and sombreros floated into the basement of the old Purgy’s. Party over.

Ten years later, a rogue, end-of-season liftie fete at Columbine also sank its pond skim attempt. The vision was titanic, but the irrigation pump failed to deliver the goods, leaving beer-happy lifties with a high-quality footbath and an algal memory to add to Purg’s squelchy pond skim history.

But redemption is sweet, and on April 2, 2017, history will not repeat itself, as Matthew Krichman, Purgatory’s events manager, says the resort is getting serious about pond skimming.

“The pond that we’re building is no joke,” Krichman says. “We’re confident it’s going to be a killer pond with no holes in it. It’s a pond design that’ll knock people’s socks off.”

Not that socks are required for pond skimming. In fact, not much is needed for this sport beyond desire and proper equipment.

For those of you unfamiliar with the exercise of going full speed down a slope of slushy corn onto a frigid stretch of water, there are two ways for participants to make the podium: display a successful crossing with impressive form and/or a mind-blowing trick (pretzel with cheese or a standard backflip will do); or melting the crowds’ faces with a backslap, belly-flop, double-ejection or wardrobe malfunction. For the record, Purgatory Resort is not encouraging bodily harm or nudity, says Krichman.

If you’re in the former category, keep your speed and tips, and eyes on the prize. You might consider waxing your skis, since wax repels water giving you a better chance of staying afloat.

If, on the other hand, you’re going for Jerry of the Day, don’t think twice; just get sendy.

Regardless of your mode and goals, bad ideas include taking a selfie during your performance or – gasp – not wearing a costume. Like any unofficial holiday in these parts, dressing up is all but mandatory. This is much to the delight of by-standers, who can expect to behold an assortment of classic gaper-day attire, including jeans, tutus, monkey suits, banana hammocks, nipple tassels, political statements, and floaties (for additional safety). When in doubt, less is more.

History buffs will be disappointed to learn that this fascinating springtime ritual has mostly fake news to lean
upon for its water-logged genesis. It’s believed to have originated in the late 1920s as a spin-off of skimboarding, which was first practiced by life-guards in Laguna Beach, Cali. Only instead of gliding skis over a chilly puddle, these uber-tan hunks were skimming pieces of lumber across sand and sea water.

While skimboarding grew to become a sport replete with sponsorships and European recognition, it’s snowbound cousin has had a much slower development and doesn’t even boast a Wikipedia page – yet. Rather, heresy and alternative facts point to Canadians as the unsanctioned founders.

In the beginning (March 1928), two intrepid skiers named Cliff Whyte and Cyril Paris became the first to tour the high country around Banff after discovering that fires and logging had created ready-made ski slopes. Later that spring, Whyte, Paris and fellow ski bums gathered to celebrate the runoff, making merry and haphazardly establishing Sunshine Village’s Slush Cup, which celebrates its 89th year this May.

This year, there’s no evidence that the World Cup will return, but skimmers still have plenty to focus on. On April 8, the East Coast gets in on the superlatives, with Sugarbush hosting its pond skimming on what is being billed as the longest stretch of water (120 feet) in the United States. Also on the horizon is the 15th annual World Pond Skimming Championships in Vail, which takes place April 16. Winners receive a pair of Liberty skis and a 2018 Epic Pass. Not bad for a fringe sport.

Meanwhile, Purgatory will concentrate on presenting a flood-free event. To mitigate unknowns, the resort has partnered with adrenaline-sports experts at Red Bull. First on the long list of things to do was import a specific pond-skimming liner from Minnesota. Slopes manager Josh Hamill is in charge of building the 70- by-30-foot pond, which started Wed., March 29 with the clearing of snow from a roped-off section at the base area – the same luckless site as 2001. But attention to detail is the name of the game, and luck has little to do with pond specs. Besides the critical liner, Krichman says the water source is also a vital piece of the puzzle, which is why Purg refuses to rely on the saliva of yetis.

“If you pull dirty water, the pond will look dirty. We want sparkling and beautiful, so we’re using water from the well

on the mountain between Demon and the terrain park.” Operations will start pulling water into the properly lined pool beginning Saturday afternoon. Filling the structure with 50,000 gallons of water should take about 10 hours, says Krichman.

While pond skimming events typically mark the last day of the season, Purgatory’s Pond Skimming is simply a big celebration of spring runoff, overflowing with prizes and Ska beer. The resort plans to remain open till April 30.

So “get your skis shined up, grab a stick of Juicy Fruit, and show us your moves,” invites the hopeful hill looking for a little San Juan salvation. And keep your expectations in check, because, as we’ve learned in the last couple of months, all ponds leak. Sometimes they’re big leaks, some-times small. At least we won’t have to worry about the thread count of the towels (not provided), or any unwanted presidential sweatpants raining on our parade. Anonymous sources say he has a phobia of slopes (and reading, for that matter). 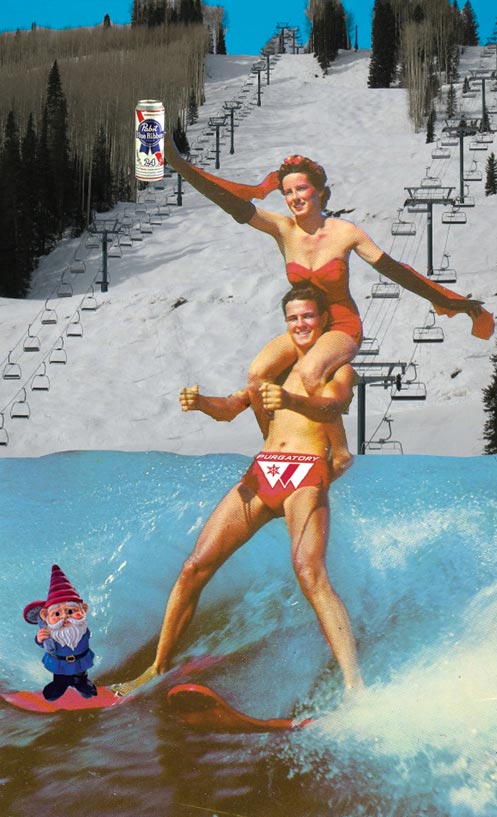 Who: Open to the first 100 skimmers. Sign up starts at Purgy’s at 10 a.m. Must be at least 16. Signed waiver is required (If under 18, parent must be present to sign) How much: $5 entry fee. Spectating: priceless