OnStage: When the spirit moves you
Merely Players, 20 Moons collaborate in retelling of Dickens' classic 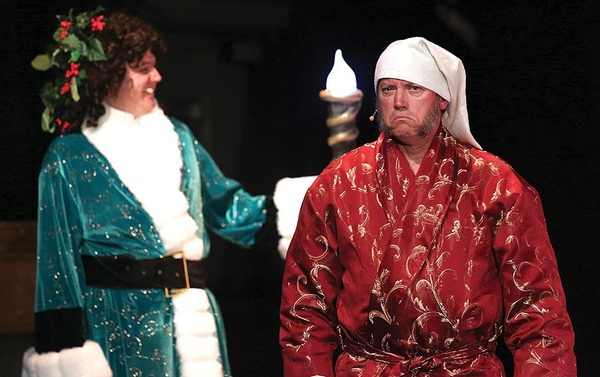 Bob Thom as Scrooge with the Ghost of Christmas Present (Geoff Johnson.)/ Photo by Jennaye Derge

Conjure images of merry old Eng- land, plum pudding, a Christmas goose and jolly carolers and you can’t help but think of “A Christmas Carol,” Charles Dickens’ beloved tale of redemption. It might be hard to imagine, but in Dick- ens’ time, Christmas was nowhere near the celebration it is today; many businesses didn’t even consider it a holiday. In the year 1843, Victorian London was a squalid, cacophonous, congested city ruled by the top 1 percent. In that same year, wealthy Henry Cole commissioned an artist to design the first known Christmas card; an illustration depicting a group of people around a dinner table. It was also the year Dickens penned his immortal story of Ebenezer Scrooge’s spiritual awakening.

Since then, Scrooge’s tale has been told via film, animation, puppets, musicals and formal readings. Treasured for generations, the uplifting account of one man’s moral epiphany is potently apropo for today’s complex, discordant time.

Perhaps in response of our present dismay, the Merely Players theatre troupe has collaborated with the 20 Moons Dance Co. to present a delightful holiday gift to Durango: “A Christmas Carol” at the Main-stage Theatre at Fort Lewis College. Considering the countless number of versions over the years, this adaptation may be unlike any you have ever seen. Fourteen ac- tors plus six dancers will be participating in what Director Mona Wood-Patterson describes as “a fusion of dance, puppetry, original music and theatre.”

Fezziwig’s Christmas party notwith-standing, readers may wonder how dance is integrated into the story. Jessica Perino, 20 Moons co-artistic director, said the dancers use improvisation as a tool to create “phrases” that ultimately become motifs throughout the show. “We draw upon (them) to transport ourselves around the stage,” she said.

These so-called “spirits” move about the stage ethereally and even act as pieces of furniture; serving as prop movers and stage hands, yet never seem intrusive.

Combining dance with her original adaptation of the story, Wood-Patterson admitted this version is very close to the original story, with most of the dialogue taken straight from the book. Once written, she and her husband, Technical Director Charles Ford met with 20 Moons Director-Choreographer Anne Bartlett to figure out how to best develop the script to incorporate dance and technical elements to fit the FLC stage.

Wood-Patterson’s production suggests that other worldly elements are among us and follow us on our journey through life. The dancers portray such spiritual forces that accompany Scrooge on his voyage.

Jeroen Van Tyn, music director and com- poser, incorporated live music featuring Jon Bailey (of Durango Cyclery fame) and Heather Rasmussen on drums and violin, respectively. There is also recorded Christ- mas music and singing from the ensemble cast. The integration of the music is an affective element within each scene, and audiences will likely find themselves tapping along during Fezziwig’s party.

All of the actors portray several roles – with a few having as many six parts – and a number of them alternate roles between performances. The only single role, the cantankerous and miserly Scrooge, is played by local favorite Bob Thom, who is on stage throughout the entire show. His encounters with the visiting spirits are at the core of the story and the staging of them is masterful, including some highly imaginative puppetry for the Ghost of Christmas Yet to Come, created by Charles Ford. His design for the apparition of Jacob Marley, Scrooge’s dead partner, is mar- velous.

Multi-talented actor Geoff Johnson takes on the Ghost of Christmas Present. He also serves as Jacob Marley’s voice, the younger Scrooge, and a few other characters.

One of the most memorable characters in “A Christmas Carol” is Tiny Tim, who is performed most admirably by child actors Bia Costa and Dashel McAlvany. Bia recently turned 6, and she is already quite the actress. Her mother, Shea Costa, is a Merely Players regular. Dashel is the son of Mary-Catherine McAlvany, who plays the Ghost of Christmas Past and also performs regularly with the troupe.

Costuming by JoAnn Nevils is spot on and charmingly crafted with Dickensian flair. Along with the diaphanous dresses of the dancing spirits, she has created a superb period atmosphere on the Fort Lewis stage.

With a nod to the talent in the college Theater Department, Merely Players hired Monique Cuyler, a student at the Fort, to design the lighting, which plays its own significant role in the production.

“The hope is that this show may act as a sort of panacea, at least a moment of relief, light and hope, in a time of division and confusion,” Perino remarked.

It’s an apt desire for this holiday season. 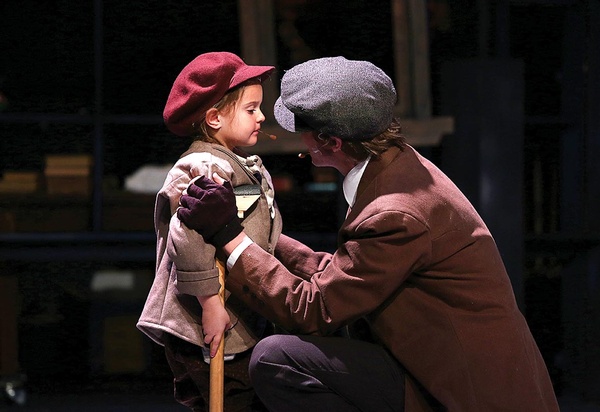 Where: Main Stage Theater at FLC