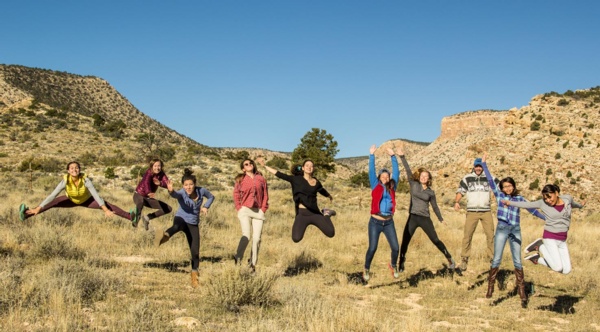 Uplifters hail from all four corners of the Colorado Plateau. Some have a passion for rocks and rivers, while others want to see traditional agriculture continue to thrive on the reservations. They Uplifters here are: Brooke Larsen, 23; Claire Martini, 25; Frankie Beesley, 24; Kelsey Morales, 23; Leiloni Begaye, 28; Marcel Gaztambide, 23; Montana Johnson, 24; Maia Wikler, 23; and Rhea Nanni, 24./ Photo by Michael Remke

There’s something in the air, and it’s better than Mary Poppins. It’s a fresh breeze stirred by a group of young climate change activists setting up camp for the Uplift Climate Conference, Aug. 18 – 20 at Chris Park.

These aren’t hippy harbingers of environmental hopelessness, mind you. Rather, they’re “Uplifters,” named for the geologic occurrence that led to the rise of the Colorado Plateau and its collection of wonders, like arches, hoodoos, Grand Canyon and the San Juan Mountains.

Organized by nine 20-somethings, the three-day conference serves as a networking platform to connect young people (18- to 30-ish) from around the Four Corners.

“We’re finding the stories of what it means to be a millennial in the Southwest in the face of climate change,” 25-year-old Uplift coordinator Claire Martini said on Monday. An Americorps volunteer, Martini is currently working for the Grand Canyon Trust.

Conference organizers anticipate 100 millennials, with half coming from Arizona, and the rest trickling in from Utah, New Mexico and Colorado. Cost for the pine-clad think tank is $50, which includes camping and meals provided by Seeds of Peace.

Besides morning yoga, art and evening music from Elder Grown, Uplift is far from the typical festival scene. It’s a grassroots process exploiting the power of reflection, storytelling and innovation to address climate change. Flower crowns and vegans may be present.

Featuring speakers, workshops and breakout sessions, the conference’s theme is “Story,” with the ultimate aim of encouraging young people to find their voices. Day One focuses on personal narratives and the “Story of Self;” Day Two pulls the” Story of Us” together; and Day Three crescendos with a call to creative action and the “Story of Now.”

Part geography lesson, part battle cry to wake up and smell the drying riverbeds, Uplift combines science, cultural components and “what’s happening on the ground” to pull together the story of the Colorado Plateau.

“Climate change is the biggest threat to our livable future in the Southwest,” says Martini. “Right now, young people’s voices aren’t being heard by decision makers. We’re trying to change that.”

Besides hearing from young folks about their experiences living on the Colorado Plateau, the conference also features an intergenerational exchange with adults, like Gregg Garfin, associate professor of climate, natural resources and policy at the University of Arizona; Jihan Gearon, executive director of the Black Mesa Water Coalition; and Laura Schmidt, who leads Good Grief, a group that helps people grieve climate change.

“She’s all about being uncomfortably vulnerable with how these things affect you,” says Martini.  “It’s easy for me to talk about large landscape conservation, community adaptation and the idea of wilderness … but it doesn’t fix my own guilt over my carbon footprint.”

On Thursday at 8 p.m., Uplift will host a free screening of Josh Fox’s “How to Let Go of the World (and Love the Things Climate Can’t Change)” at Chris Park. Weather-appropriate clothing, camp chairs and BYO-popcorn recommended. “We opted to make it a community event because there are a lot of older people working on these issues, wondering what the kids are doing these days,” says Martini.

The movement to include youth in the climate change dialogue was sparked by Ethan Aumack, of Grand Canyon Trust, and Tom Sisk, of Landscape Conservation Initiative (LCI).

“They observed ... that both of their groups were getting older and tended to be mostly white males,” says Martini. “They thought ‘maybe we’re not doing something that’s interesting to diverse young people.’”

So the Trust and LCI funded a year-long, self-directed project that invited revolutionary young minds to design a gathering that would encourage conversations about conservation. The inaugural Uplift gathering was held in April 2015 in Flagstaff.

What sprang from that was the Southwest’s striking diversity and myriad of needs spanning cultures, landscapes and economic backgrounds. It helped highlight a chasm of challenges – from climate justice, socially driven language, and culturally appropriate communication – as well as the largely untapped connections among Colorado Plateau residents.

“The Uplift conference is an opportunity for young people to ruminate on solutions and temporary fixes we’ll have to make,” University of Arizona’s Garfin said. “We have to look at this in a holistic way; not just from an environmental science perspective, but from telling stories and how narratives, arts, culture, religious and spiritual practices fit in.”

In 2010, Garfin led a study, “Assessment of Climate Change in the Southwest United States,” which verified that temperature increases across the Southwest have led – and will continue to lead – to shrinking snowpacks, earlier snowmelts, decreased river flows, increased wildfires and weakening ecologies. It also exposed a complex underbelly of vulnerable populations, cultural differences and unresolved water rights for tribal nations.

On top of these stresses, the nation’s hottest, driest, fastest-growing region is also reliant on one of the most impacted natural resources: water from the Colorado River. In fact, 90 percent of the Southwest is drained by the Colorado River and its tributaries.

As Uplift organizer Brooke Larsen puts it: “We are a community connected through our shared love and abuse of the Colorado River and the lands that depend on it.”

The river cuts through red rock country, 10 national parks, 17 national monuments and thousands of acres of federal and tribal lands. But these convoluted companions of peaks, piedmonts and plains are also accompanied by a booming population that is expected to double between 2000 - 50, adding complicated pieces to the climate puzzle.

“The Colorado Plateau is pretty darn close to the bulls-eye for the biggest temperature increases for the contiguous 48 states,” says Garfin.

But the Colorado Plateau is also, thankfully, home to the Uplifters, and there’s nothing quite as inspiring as the promise of impassioned youth.

“I get such a tremendous jolt of energy from students that have a genuine concern and enthusiasm about making change,” says Garfin. “Change takes time; it’s tiny baby steps until the political and economic winds are blowing in the right direction to make big changes. We’ve got to put our efforts into communication and education. And getting the next generation on board is the key.”

In Uplift, Garfin sees the potential for a strong crop of leaders, something that’s missing in a world rife with dismissive adults in denial.

“We need leadership,” says Garfin. “ Many of (these youth) have the characteristics of good leaders, and if not, they’ll get a hint of how to develop those.”

There’s no anticlimactic ending to this story: Martini and her compatriots are set to take massive strides, poised and ready to carry the torch for the next generation.

“How could we not be into climate change?” asks Martini. “If I had kids, I’d wonder what does their climate future look like? It’s our job to make those changes at a local level. That’s the bright side we can manage: regional and community level organizing and planning.”

To find out more, or for a full itinerary of the Uplift conference, go to: upliftclimate.org. 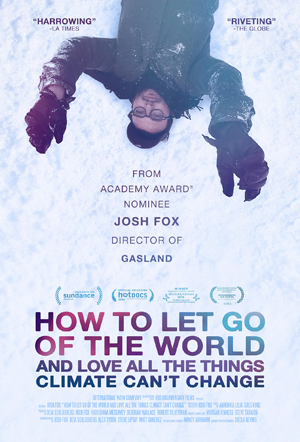 What: Public viewing of “How to Let Go of the World (and Love the Things Climate Can’t Change)”