The Divine Miss S.
Sarah Syverson serves up comedic relief for those of us on – and off – the spiritual path 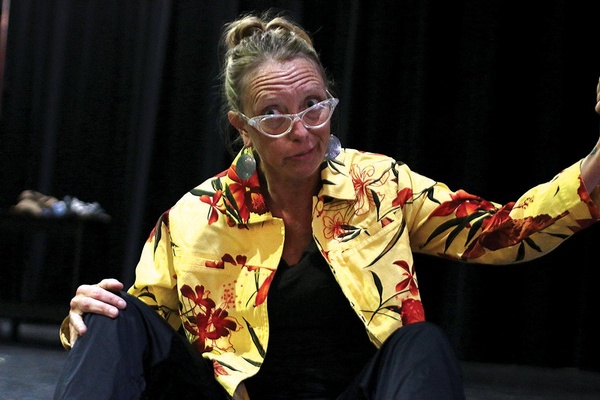 Sarah Syverson rehearses "Stella," one of 12 characters she plays in her upcoming one-woman play "The Secret Lives of the Divine" on Monday at the Durango Arts Center. The play runs this weekend./ Photo by Jennaye Derge

What’s so funny about religion? Well, chances are if you spent your formative years sitting on hard, wooden pews, confessing sins to a dark screen in a tiny room or even watching the likes of Tammy Faye Baker on TV, you’ll find more than a few loose threads to pull from the holy vestments of organized religion.

And Mancos comedienne and playwright Sarah Syverson plans to do just that, as well as poke lighthearted fun at the seemingly never-ending human search for meaning, this weekend with her one-woman play, “The Secret Lives of the Divine.” Syverson, who wrote the play eight years ago, has spent the last several refining it at various venues, including the Boulder Fringe Festival, and will bring it to the Durango Arts Center on Friday and Saturday.

The performance is a benefit for the Durango Dharma Center, which offers regular meditation sessions to the community. Syverson said she discovered meditation 10 years ago after a long, winding and oft humorous, path to her own spirituality. “It’s very eclectic about its approach. It just fits,” she said of her meditation practice, adding that it incorporates facets of everything from Judaism and Christianity to Buddhism and Hinduism.

Syverson’s personal journey to “enlightenment,” if you will, began as a child, growing up on the edge of Glacier National park in Big Fork, Mont. (population 4,270). There, her religious experiences ran the gamut from Methodist, Lutheran and Unitarian to the “pop religion” of televangelist Robert Schuller’s “Hour of Power” and what she calls the “Be-Your-Own-Person” religion. Upon leaving Big Fork, she even took a year abroad to study the Russian Orthodox Church in the newly fallen Soviet Union before going on to the Jesuit-run Gonzaga University in Spokane, Wash.

Surprisingly enough, she came through her broad exploration of the spiritual landscape with one overarching observation.

“Basically, everyone is talking about the same thing, they’re just using different language,” she said.

And, at the risk of ruffling a few cassocks, the whole fire and brimstone thing? It could stand to be lightened up just a tad.

“People would get really earnest and serious, they had a hard time having a sense of humor,” said Syverson, who once spent a summer studying writing and improv at Chicago’s famed Second City.

She calls the play “poignant but with a tremendous amount of humor.”

“It’s about our efforts to connect with the divine, God, cosmic force, whatever you want to call it,” she said.

A fixture in the local theater scene, Syverson cut her theatrical teeth at the renowned Big Fork summer playhouse. “It was just magical,” she said, “The smell of the old stage … that’s how I got the bug. It’s just something I’ve pursued ever since.”

“Secret Lives of the Divine” – performed entirely by Syverson – could be considered a divine miracle in itself. It centers around the spiritual journeys of no fewer than 12 characters, including: Miranda, a “spiritual course junkie;” Henry, an 8-year-old with a monster under his bed; Jamal, in Indian guru moonlighting as a Sprint customer service rep; and Jeremiah, a vagabond whose love of whiskey rivals only that of his love for the good Lord (who just so happens to sport a white beret and white polished shoes.)

“They’re with me all the time; it’s been a pretty intense practice,” said Syverson of the play, which is being directed by the DAC’s Theresa Carson. “Theresa has been phenomenal to work with.”

Amidst the humor, there are other characters in the play that explore the big questions – nay “The Big Question” – such as Katherine, a fortysomething academic dying of ovarian cancer; and Stella, a Jewish New Yorker in her 60s who suddenly finds herself alone and embarking on her first Zen retreat.

“She’s sort of the main character,” Syverson said of Stella, who throughout the course of the show goes from questioning the universe to ultimately finding peace. (We’ll spare the details so as not to spoil the ending.)

In fact, peace could be the underlying theme here, with each character in some way finding acceptance, from Jamal walking a caller through the process of acquiring more “RAM” to Katherine, finding solace in the same powder blue polyester-suited woman at church.

“You don’t think of God in synthetic fabrics, but she finds comfort from this woman,” said Syverson. “In a world that’s always changing, this is the constant that always remains the same.”

And whether you’re looking for soul-searching meaning or just a fun night of entertainment – or both – Syverson said much like the spiritual practices we all pursue, “Secret Lives” has something for everybody.

“If anyone has any kind of interest in spiritual practices, they’ll have a good time,” she said. “Plus, it’s just fun to see one person transform into 12 characters. It’s a mini-marathon.” 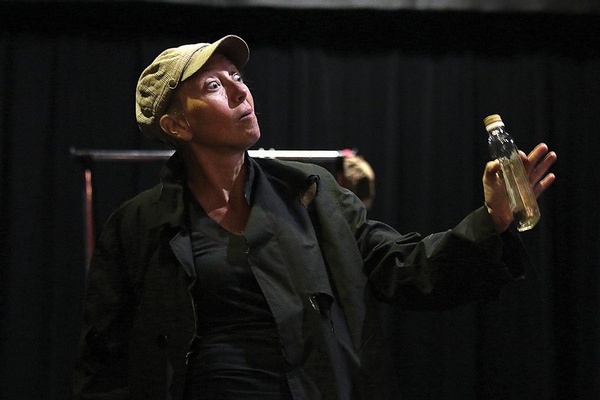 Syverson in her role as Jeremiah, "a bum down by the river, who has lived an intense life." In her play "The Secret Lives of the Divine," Jeremiah meets God, who just so happens to sport a white beret and shiny white shoes. /Photo by Jennaye Derge

What: “The Secret Lives of the Divine,” a one-woman play by Sarah Syverson benefitting the Durango Dharma Center