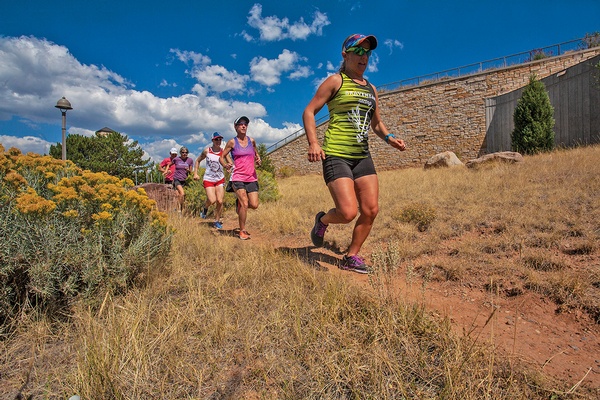 Members of the newly formed Durango Triathlon Club get in a lunchtime jaunt on the FLC Rim recently. After a four-year hiatus, FLC's Tri the Rim returns Sept. 30./Photo by Stephen Eginoire

Attention all iron men, women and children: Tri the Rim is tri-ing again. Yes, after a heart-breaking four-year hole in the local triathlon calendar, the once-annual event is making a comeback (we’ll refrain from using “triumphant” since that’s already been done) Sun., Sept. 30.

Formerly hosted by Fort Lewis College’s Housing Department, the popular sprint triathlon had an illustrious 26-year run from 1988-2014 before tapping out. (For the record, it was also held in the notoriously temperamental month of April.)

“It’s a lot of work putting on any race, let alone a triathlon – its three times the logistics and cost,” local triathlete Michelle Blankenship said.

Last spring, Blankenship helped found the Durango Triathlon Club – of which, believe it or not, there previously had been none.

“We have a running club, biking clubs and master swimmers, but not something that brought us all together,” she said. “I thought, surely there’s more people that thought it was a good idea to form a nonprofit tri club.”

So Blankenship put the word out, and they came. In a few short months, the nonprofit group gained 28 members, as well as plenty of nonjoiners (triathlon is, after all, a solo sport) who like to partake in an occasional training sesh or open water swim.

“There’s a lot of people who aren’t members but just show up,” she said. “Sometimes we’ll even get out-of-towners.”

It was Blankenship, along with fellow club member Melissa Maloney, who came up with the idea to revive Tri the Rim. She’s not sure who proposed the idea first – let’s call it a tie – but consensus was unanimous. Maloney, who also happens to be the director of the Health

Sciences Department at FLC, popped the question to FLC Athletic Director Barney Hinckle, and they were off running.

“Everyone was on board to bring back Tri the Rim,” Blankenship said. “It’s great for the school and possibly finding women athletes for a program.”

See, although FLC has no formal triathlon club, USA Triathlon, the national governing body for the sport, has grants available to help colleges develop womens teams. It’s something Blankenship, Maloney and others would like to see – and something the college is exploring. Although womens college tri teams are not exactly commonplace, Blankenship notes it is an “emerging sport.” (In fact, the grant is called the Womens Triathlon Emerging Sport Grant.)

With roots tracing back to France in the 1920s, the first official triathlon on American soil didn’t take place until 1974, in San Diego’s Mission Bay. The infamous Hawaiian Iron Man came along a few years later – a familiar story of a “friendly” wager – and the sport was out of the gates in the United States. By the early 1990s, the Iron Man had grown to a multi-million dollar name and was gobbled up by a Chinese conglomerate. Iron Mans, Iron Man 70.3s (a half Iron Man), Iron Girls and Iron Kids were popping up all over the country. In 1996, an off-road “extreme” version, the Xterra Games, launched, and in 2000, triathlon became an official Olympic sport. In 2015 (the most recent year for which numbers are available) USA Triathlon had more than 116,000 member and sanctioned some 4,300 events.

Today, there are even special tri-specific road bikes (the ones with the funny u-shaped handlebars), cold-water wetsuits (with extra buoyancy) and clothing that can go straight from pool to bike, called a “speedsuit” (which, we imagine, leaves little to imagine.)

If all this is enough to leave you breathless – and slightly terrified – fear not. Blankenship – who has 40 Xterras and seven assorted road tris under her hydration belt – said Tri the Rim is being billed as a “beginners” tri. That is, an 800-yard swim (16 laps in the pool); 1-mile bike ride (three laps around the Rim); and 3.1-mile run (one lap). Totally doable.

(And lest you try to use the “I’m too old” excuse, be forewarned: Blankenship just turned 50, albeit a 30-ish looking 50. She’s what’s called an “age-grouper” – someone who races with others in her age range.)

“I think it’ll be fun for beginners and experienced athletes, too,” she said “We don’t want people to be intimidated, triathlons can be intimidating.”

In that vein, folks wanting to get their feet wet can even sign up as a team, with each person doing one leg. The cost is also meant to entice newbies: $50/solo; $95/team and $35 for students. Durango Tri Club members get 20 percent off their registration.

“We tried to make it as affordable as possible,” Blankenship said.

“I fell in love with the sport. I got bitten by the bug,” she said.

So bitten, in fact, than when her longtime employer Conoco-Phillips relocated out of the area a few years ago, she took the severance and started working part time so she could focus more on her training. Admittedly, she prefers the Xterra to the road varieties (“it’s challenging and beautiful, and a little dirtier and grittier”) and even envisions bringing an Xterra games to the area some day

But that’s a lot farther down the road. For now, there’s no doubt that resurrecting Tri the Rim is a good first step.

What: Tri the Rim sprint triathlon
When: 9 a.m., Sun., Sept. 30
Where: Fort Lewis College, starts and ends at the clocktower Info or to register: www.durangotriclub.org