Whip it good: A decade of Devo 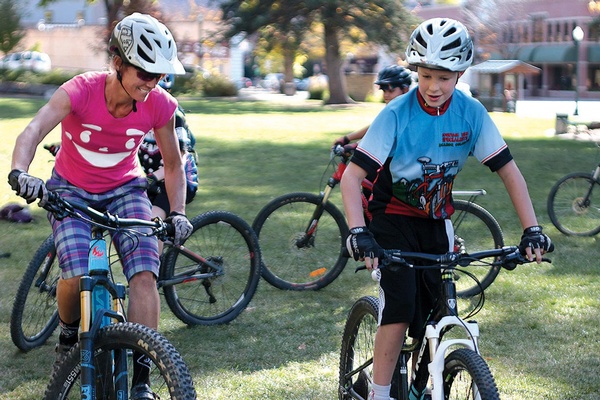 Devo co-founder Sarah Tescher competes with sixth-grader Jamie Dickson in a warm-up game of "foot down" at Buckley Park recently. "The original mission was to create life-long cyclists," says Tescher. "So we try to be as inclusive as possible and get as many kids on bikes as possible." /Photo by Jennaye Derge

If only, I think, gazing wistfully at a pack of Devo kids zipping through Sailing Hawks on their noble two-wheeled whips, sending it over chunky boulders or picking seamless lines betwixt a minefield of baby heads. If only I’d started mountain biking when I was 5. Now look at this brood of talented teens, reminding me that comparison truly is the thief of joy.

It really hits home in a golden afternoon moment that halts my screaming descent out of Test Tracks as little rippers proudly sitting atop miniature bicycles form a squiggly line to let me pass, smiling under their tiny helmets. Do those cute, drooling bobble heads of preschoolers know how good they’ve got it?

“Snack time in Junior Devo is a huge favorite with the littles and always asked about, kind of like, ‘are we there yet?’ but instead, it’s ‘is it snack time yet?’” says Jamie Wienk, administrative director of Devo.

So maybe “the littles” are dreaming of Goldfish and Chip Peddler chips instead of reflecting on how blessed they are to have a bunch of grown-ups making them ride their bikes. Perhaps the elder students can better appreciate their after-school activity option versus binging on episodes of “Saved by the Bell” whilst in- haling a plate of Bagel Bites, like those of us raised in Mississippi.

But as of 2006, kids in Durango no longer have an excuse to stay inside after school with delicious processed pizza because Chad Cheeney and Sarah Tescher had a better idea: they would create the Du- rango Junior Development Mountain Bike Team (Devo), which would inspire generations of healthy, happy kids.

“It’s just kids getting out there and exploring on bikes,” says Howard Grotts, one of the first generation Devo students – and the first Devo alum to represent the USA at the Olympics.

In Devo, kids don’t have to be serious riders, aggres- sive competitors or even race at all, says Grotts. Rather, they’re welcome to just be kids, and nothing keeps one young at heart longer than knowing how to ride the almighty, humble bicycle.

“It’s a unique sport in that once you learn it, you never really forget,” says Grotts. “It’s practical in so many different ways.”

“We started our programs so kids can know how to use a bike for things that come up in their lives, whether it’s mental or social stress, athletic purposes, commuting, making videos, mechanic-ing, anything,” says Cheeney, who recently returned to Durango after a stint in Bend, Ore.

In light of this, Cheeney and Tescher evolved Devo out of a “yes” mentality, where the organization adapts whatever’s cool in cycling and then gets kids excited about it. Enduro? Absolutely. Super D? Check out the Flyers Gravity Team. Bike polo camp? Sixteen people participated this summer. Cyclo cross? Yep.

“We have so many programs that it’s not really geared to a certain type of kid,” says Cheeney. “We get ball-sports players in the off-season, and we get kids who don’t play sports at all.”

Beginning with Push Bike lessons for ages 2 to 4, the subsequent 17 Devo programs allow for sprouting tykes to progress as much or little as they want until they turn 19. Along the way, each kid is coached to be stoked on improving his or her individual skills, what- ever their athletic ability or ambition.

“It’s such a good environment in that there’s never pressure to perform,” says Grotts. “There are definitely development programs out there that are focused on re- sults. I think Devo’s been so successful be- cause (results are) totally secondary to just being outside.”

Every time they hit the trail with stu- dents, coaches strive to implement the Devo core values. At the heart are approach- able tenets, like if it has two wheels, it’s wel- come in Devo, and if athletes love riding, they’ll have success achieving their riding goals. Out of these, success comes with skill development, camaraderie and sportsman- ship.

“The original mission was to create life- long cyclists,” says Tescher. “So we try to be as inclusive as possible and get as many kids on bikes as possi- ble.”

In both 2014 and 2015, nearly 1,000 rid- ers registered in Devo programs. From “Top Secret” Training Camps for basic funda- mentals to the com- petitive High School League, Devo offers a broad spectrum of cy- cling opportunities throughout the year. This summer, for in- stance, a group of Devo high schoolers rode from Durango to Telluride for a Pearl Jam concert.

“It’s a hard thing to run,” admits Cheeney of the myriad of Devo programs. “It bites us in the ass a bunch, too.”

But that won’t stop Cheeney and Tescher from adding more programs and enticing more kids to ride bikes. This year was extra special for the Devo founders, as they watched former fourth-grade Devo Jrs. grad- uate high school. As well, the current high school league from DHS and Animas High are both No. 1 in their divisions.

Whether those kids went on to race on the world’s stage or commute to their barista jobs, each Devo kid received the same attention in those formative days. For instance, the tale of Grotts’ rise from scrawny middle schooler to professional athlete isn’t one of a prodigy radiating the aura of greatness. Rather Grotts was just a shy kid who wanted to ride his bike with the other kids and needed a bit of prodding.

“I just knew he wanted to ride his bike with us real bad, but he didn’t want to ask his parents for some reason,” recalls Cheeney. “I told them that we’d make it work for Howard if he wanted to be on the team. Bikes, dues, whatever – we have a giv- ing community and could make anything happen.”

The “giving com- munity” of Durango must be mentioned with any talk of Devo’s success. Devo is, after all, a community- based organization in a bike-nerd’s paradise. Devo’s ongoing need for resources, like vans, trailers and coaches, can only be met with the contin- ued support of contri- butions, sponsors and partners.

In honor of these collaborations, Devo is excited to invite the entire community to its 10-year anniversary party on Sun., Oct. 30.

The festivities kick off at 3 p.m. at Buckley Park for what might be the biggest bike pa- rade in Durango his- tory. Wear a costume and pedal to the Powerhouse for a night of celebration, food and family. While it’s a free party, donations and aluminum or tin gifts are welcome (the of- ficial 10-year wedding anniversary mate- rial).

There will also be a live auction where bidders vie for bike-and-brew packages. Winners get matched up with a team of coaches, a local bike shop, brewery and restaurant for an unforgettable day (or multi-day) of adventure in the San Juans riding with the Devo OG’s.

For example, the Founders Package fea- tures a ride from Kennebec back to town with Cheeney and Tescher. The day starts with a bike fitting at 2nd Avenue Sports and ends with Nini’s tacos and Ska beer. Other packages include a women’s-only, three-day bikepacking trip, a fat bike dream weekend with Durango Cyclery, and a Diaz Suspen- sion Design tune and ride with Anthony Diaz down Haflin.

“The idea is to fund raise but also bring awareness to Devo’s close ties with each bike shop and our gratefulness towards them for their support,” says Tescher.

Local bike shop relationships are critical for Devo, considering each one offers dis- counts for Devo athletes (that is, not for parents). Besides loaner bikes, scholarships are also available for Devo programs. Regis- tration fees range from $60 for Push Bike lessons to $250 for middle school and high school sessions. The price jumps signifi- cantly if a kid decides to pursue racing.

“We want to be cheap and affordable,”

says Cheeney. “But, damn, we have to pay coaches and have actual insurance.”

In the spirit of teaching kids to be passion- ate leaders in their community, Devo athletes and parents share the load by providing hun- dreds of volunteer hours through Trails 2000, Iron Horse Bicycle Classic, Project Merry Christmas and crowd-favorite, the Devo Bike Swap, to name a few.

“I’m so proud of Devo and its growth in being a welcoming program versus being a scary thing,” says Tescher. “I hope it stays that way and doesn’t turn into 100-percent racing.”

Because competition isn’t everything, Strava geeks. Yes, I’m talking to me. So in- stead of bemoaning not growing up in a bike-crazed community, I’ll meditate on the Italian meaning of the word devo, which is “I must,” as in, I must keep trying to ride Sailing Hawks. I must be brave on Raiders Ridge. And, most importantly, I must keep pedaling, because it’s never too late to whip it, whip it good. 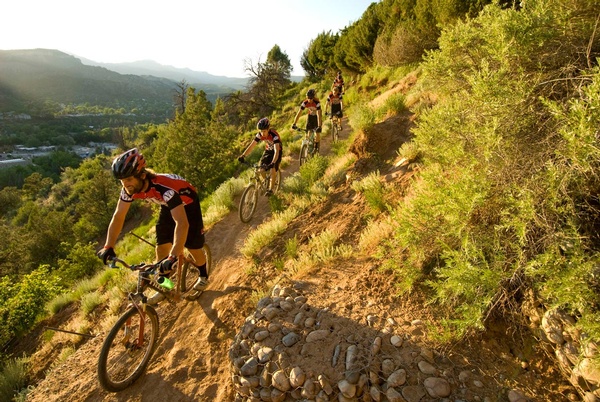 A not-so-distant blast from the past: George McQuinn in his U14 days, circa 2010. McQuinn will be graduating Ani- mas High School next spring, the "first class" of Devo./File photo

Where: Meet at Buckley Park for bike parade or hook up with the party at the Powerhouse Science Center starting at 4:30 p.m.