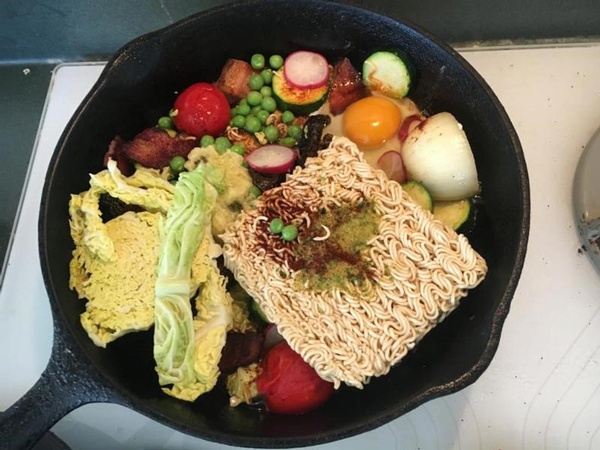 In the apartment where I grew up, my culinary horizons were broadened by a Korean family down the hall. By second grade, I could hold a bowl of rice to my mouth and shovel it in with chopsticks, thanks to the diligent coaching of the Park girls, who were about my age. They also taught me how to pull noodles, one by one, from a bowl of high-end Japanese instant ramen.

Sometimes their parents doctored the ramen with seaweed, green onion and egg. It hampered the noodle games, but by college I had some valuable life skills, along with disdain for my dormies and their Top Ramen.
Today, I doctor with produce from the farmers market, but I still use the Park family’s instant ramen of choice: a Japanese brand called Sapporo Ichiban.

Japan is the undisputed birthplace of ramen. Korea, however, never developed a culture of ramen bars, storied humble kitchens where fresh noodles are served in slowly simmered broth. Without that background, most Korean eaters, like Americans, first experienced ramen in packaged, instant form.
But it’s safe to say, ramen is having an extended moment, and Korea has been a leader in this worldwide phenomenon. The land that gave us K-Pop produces some of the most over-the-top versions of packaged ramen. But the favored brand among South Koreans is Shin Ramyun, a simple, spicy, beef broth-based formulation that’s become an iconic South Korean comfort food.

During the hot days of summer, piquancy is an unexpected asset to a hot bowl of brothy ramen, as temperature-heat and spicy-heat combine like a double negative to create their polar opposite. Your face gets steamed as the hydrating liquids warm your belly, while the chile heat lights a refreshing fire inside, making you sweat profusely, which cools you off dramatically. While chilled soups get a lot of attention in the sweltering heat, they aren’t eating gazpacho in the infernos of Bangkok, Saigon, Chengdu and other hot Asian places where the soups are hot, spicy and brothy, not to mention full of noodles.

In addition to cooling off, I like to use spicy ramen as a way to absorb seasonal vegetables. Wild dandelion and nettle ramen during mud season, pea and zucchini ramen in spring, umami-rich tomatoes and corn in summer.

In this country, most fresh ramen – the kind served at the places where hipsters wait in lines around the block – includes a choice of miso, soy base or tonkatsu (aka pork bone) broth. When it comes to instant, I actually prefer the chicken or regular flavors of Sapporo Ichiban. But regardless of noodle brand and flavor, I like to carry on the tradition of adding bacon and eggs to the ramen. A Korean may use beef ribs instead of bacon, and that’s totally fine.

Different ingredients must be added at different times, depending on how long they need to cook. I start with bacon (just a basic flavor, no honey or maple – I like pancetta). Cook slowly on low to make it a little crispy, and leave yourself time to remember ingredients you want to add. Then, anything else that may benefit from some time simmering in bacon grease. Mushrooms are one option, though I think you would want to add butter, which is just fine in ramen. Zucchini, radish and garlic are also good early additions. Tomatoes can be added now, so they have time to spill their juices, along with half an onion, which can add flavor but be easily avoided later on. Toasted

sesame oil adds a great flavor to most ramen, and now is as good a time as any to add it. Stir it around to even out the brown, and place the dry brick of noodles atop everything else in the pan, and cover. This gets the noodles cooking, ever so slightly, in the steam of the simmering veggies. Meanwhile, start a kettle of water on the stove.

When the water boils, add the last round of ingredients to the pan. In my case, that includes a cracked egg and maybe some tofu. Sprinkle the flavor packet onto the stuff in the pan, along with an appropriate amount of chile powder, if using, and pour in the water. I like it brothy, so I add a cup or more than I’m supposed to.

The boiling hot water will continue to boil as you add it to the pan and create a bit of steam, so turn on the vent and be careful. Now you can add anything that needs just a little bit of cooking, such as peas, corn or pieces of cabbage. Pea shoots will get tangled up in the noodles, which is fun. You can also add mustard greens, frozen shrimp or scallops, meat from a rotisserie chicken, or anything else that could use a little cooking. Make sure noodles are submerged. It should take about two minutes for the noodles to cook, then kill the heat.

Taste the broth and add seasoning sauces. I like a dash of fish sauce, a splash of soy, a tablespoon of oyster sauce – but it changes depending on the soup base. If I’m using beef flavored, I add hoisin sauce. Sometimes a little black pepper is nice. Cook for a minute, covered, and serve alongside a garnish plate of raw veggies to add on top.

These garnish veggies can include fresh herbs, radicchio, green onions, seaweed, fresh cucumber slices, iceberg lettuce and even slices or wedges of low-acid heirloom tomatoes like brandywine. These veggies may wilt a bit in the heat but will still provide a fresh crunch. The Koreans, of course, like to add kim chi.

Last but not least, the spices. I recommend sliced jalapen?os and a squirt of sriracha, but there are many ways to add heat to a bowl of noodles, like chile powder (added already) or your favorite hot sauce.

As the sweat drips and the back of your neck begins feeling pleasantly cool, remember that slurping is a sign of respect to the chef in authentic ramen houses. So let your inhibitions go and dive in. Heck, I won’t even complain if you add some mayo. Just remember to bring a towel.