Succotash – it's a Southern thing 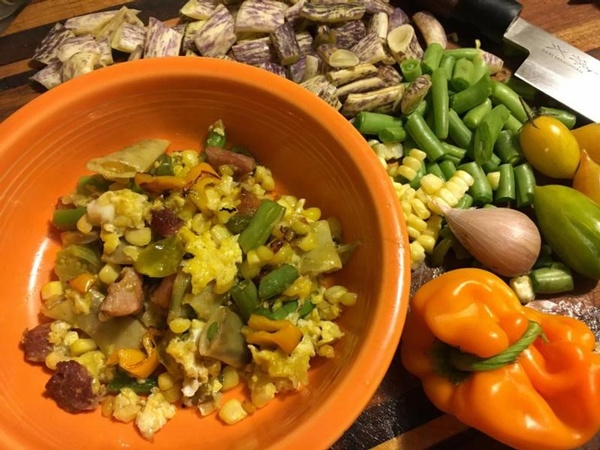 Being a child of the North, I never ate succotash. My introduction came via Sylvester the Cat, who would sputter “Suffering Succotash!” when things were not going his way.

The expression, it turns out, is one of many cooked up by those who would prefer to keep their words pious, and avoid saying, for example, “Suffering Savior,” which would technically amount to swearing. To yell “Suffering Succotash!” is no different than yelling “cheese and rice!” instead of “Jesus Christ!” At first glance, it would seem succotash is interchangeable with Our Lord, but perhaps it means that eating succotash is interchangeable with the suffering of Jesus.

A staple of the South, succotash fed people through hardship and depression, as it did the Native Americans who invented it. The indigenous root of the word “succotash” relates variously to cracked corn, boiled corn or other preparations of corn. As Native American cultures are known to have understood, when beans are added to corn, complete protein happens.

“Seaboard Algonquin,” says food historian Michael Twitty, author of The Cooking Gene, fielding my succotash questions via Twitter. He also admitted to not liking succotash much, at least the traditional version with lima beans.

I have to admit, I haven’t found a way to really like it myself when it’s made with lima beans, or black beans, or kidney beans, or any number of other shelling beans. Combined with the corn kernels, the dish becomes too seedy,

and I much prefer making it with string beans. The protein isn’t as high, but that deficit can be erased with bacon and mayonnaise (one of my favorite healthy cooking tricks).

Twitty steered me toward a southern Louisiana version of succotash, macque choux, that does not contain shelled beans. But it does allow the likes of tomatoes, green bell peppers, onions, garlic and celery. And bacon, of course. And shrimp, unsurprisingly. It’s a model roughly in keeping with my own protocols, minus the shrimp.

Without the shell beans, a pan of succotash becomes like a pan of fried rice, with corn being the medium rather than rice. Along with string beans, and the above ingredients, one can use other veggies like collard greens, zucchini and hot, sweet and roasted peppers.

I was recently succotashing veggies from the farmers market when a friend from Georgia dropped in. He saw what I had going and drawled nostalgic. “That looks like my grandma’s cooking,” he drooled. “She would send us out to the garden to get what we wanted, and then cook it up.” He did not recall beans being a necessity.

Allen Broach, who comes from an old Southern family and has fond memories of his grandma’s succotash as well, has given me some of my best recipes. He’s fine with people using string beans, although the closest they ever came growing up was “shellies,” the beans inside over-grown string beans. Here is his family recipe, which is lima-bean based.

Grannie Smith’s Succotash
Equal amounts baby lima beans and corn cut from the cob. You should “milk” the cob once the corn is cut by scraping the cob with a knife to get all the juice from it.

Use bacon drippings and saute? the limas for a couple of minutes. Season with salt and pepper then add water to cover and cook until they are nearly done. Add a small diced onion and the corn. Cook until corn is done and mof the liquid is cooked out. Just a few minutes. That’s it.

Broach confessed to having modified grandma’s recipe by adding any of the following: butter; garlic (minced); 1 cup hominy; 1 pound chopped beef brisket (or country ham); 2 ounces salt pork in one piece; salt and ground black pepper to taste; 1 potato (about 1⁄2 pound), such as Yukon gold, red or white, boiled and diced; 1 small turnip, boiled and diced; and 1⁄4 cup chopped red or green bell pepper (or a combination).

Among other parts of this recipe, I was intrigued by his country ham idea, so I picked one up at the farmers market and diced it up. Into the pan it went, and as the greasy cubes sizzled, I prepped the remainder of the veggies, adding them in layers, in the order of how much cooking they need: onions, beans, peppers, zucchini, butter and olive oil as necessary, and finally the corn. I let it cook undisturbed for a while, allowing the meat to cook in the juices.

When it’s finally time to stir – somewhere between when the veggies give up all of their moisture and when the bottom starts to burn – I add minced or grated garlic and dried thyme, and stir it up. I’ll stir again once or twice until it’s ready, and serve with cheese, parsley, salsa, roasted peppers and whatever else. Succotash, like the kitchen sink, can absorb practically anything you throw at it.

But curiously, one ingredient I’ve yet to find in succotash are processed carbohydrates. Devoid of those so-called empty calories, succotash is thus perfectly in keeping with the most stylish of today’s low-carb diets. Aboriginal recipes do tend toward the paleo, after all. And with summer giving way to fall, now is corn season, an ideal time to nab those ingredients fresh.

And for the ambitious food savers, now would be a great time to freeze some corn and whatnot. If you stock up like that, you’ll be able to suffer some local succotash all winter long. It won’t suck.