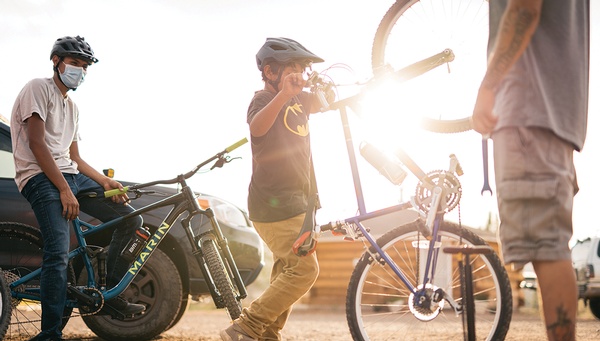 A recipient of an upcycled bike wheels off his new ride during a community bike giveaway on the Navajo Nation, sponsored by the Gallup-based nonprofit Silver Stallion./ Photo by Shaun Price

About a decade ago, I bought a $500 mountain bike from a local bike shop that was previously owned and, presumably, previously loved. I rode it for all of its intents and purposes, and then I put it in my shed where it has sat unloved and pathetic for many more years.

This story is not unique in Durango, which is why Durango-grown and current Rico resident Teal Stetson-Lee started brainstorming ideas with local bicycle recycler, Jon Bailey. The two also teamed up with Scott Nydam, founder of Silver Stallion Bicycle & Coffee, a nonprofit in Gallup, N.M., that works to bring the love and knowledge of bikes to the cycling-underserved Navajo Nation.

The trio had the same idea in mind: take those old salvageable bikes and bike parts sitting in our garages, and put them back into motion for whomever wanted or needed a bike to ride. So, on Oct. 7-9, these three bicycle lovers, along with a plethora of community partners, will band together at Buckley Park for “Share the Love Cycle” upcycle/recycle event. Free and open to the public, the goal of the event is to receive donated bikes and components and, with the help of a small army of volunteer mechanics, get the rigs rolling again. The rejuvenated bikes will then be donated to Silver Stallion, where they will be ridden, loved and not neglected in my shed or your garage.

As a professional mountain bike and cyclocross racer, Stetson-Lee is no stranger to bikes. She spent 11 years competing – seven of those sponsored by and working with SCOTT Sports. These days, under the SCOTT Sports umbrella, she has taken an advocacy role with the plan to connect with and help folks feel comfortable riding whatever kind of bike they want.

Right now, her sights are set on giving back to her own communities, specifically Durango, the town that raised her and helped her become the professional athlete she is today.

“Now I get to come back and … reconnect with my community and support my community,” Stetson-Lee said.

Besides relieving us of our dusty steeds and assorted parts – which can be done Fri., Oct. 7, from noon - 4 p.m. at Buckley (no clothes or helmets, please) – the event has an educational component as well. Time will be set aside that first day for workshops on basic bicycle maintenance in an effort to make it less intimidating for the regular folk and weekend warriors, Stetson-Lee said. “Bike maintenance should be accessible to everyone just as much as riding bikes should be accessible to everyone,” she said. “So, we want to start with that energy.”

For the event, she is bringing in a professional crew of bike mechanics from SCOTT, based in Ogden, Utah, as well as local pros and bicycle enthusiasts to show the rest of us how to do the basic fixing, nipping, tucking and adjusting.

“It’s just important for people to feel empowered to work on their own bicycles,” Stetson-Lee said.

Then, on Sat., Oct. 8, the real work begins. Stetson-Lee invites anyone with professional bicycle maintenance experience to Buckley Park to assist the core team of pro mechanics to help get as many old bikes rolling again.

“If you are a skilled mechanic with your own self-contained tools and bike stand, bring your resources and set up to help,” she said. “If you are a curious passerby, check out the bike build extravaganza in full force as an observer. Hand mechanics tools if they ask for help, and contribute any refreshments for the crew, and you will be loved forever.”

Work is slated to continue through Sunday up until the “ceremonial hand off” to Nydam at 2 p.m. Sun, Oct. 9. Stetson-Lee said her goal is to fix as many as 100 bicycles to be put to good use and given a better life on the Navajo Nation.

Silver Stallion holds an entire, complex story in and of itself. Born from a lack of bicycle shops and bicycle culture on the Navajo Nation, it grew with the purpose of empowering youth and young adults by training them to be bicycle mechanics, teaching riding skills and, in general, getting more of them on and loving bikes.

“I feel that this event’s model can resonate with a lot of other communities, so I’d like for this to be the inaugural event and continue it as an annual tradition in Durango but also used as a template that can be used in other communities,” Stetson-Lee said.

She’d like to see more communities recycling their bikes and bike components for better purposes. She acknowledges the privilege that a lot of us bicycle owners have, and she’d love to see us thinking more critically and universally about where our bikes should go if they are not being utilized, i.e., not just thrown in our garages for years to come without anyone riding them.

“The Durango community has a rich history with bicycles, and that history has often been competitively focused, so this is a way to share that love of bicycles through a new story, in a new angle that I think everyone, from the most competitive cyclist to the average cyclist, can relate to,” she said.

Meaning, anyone can and should involve themselves with the Share the Love Cycle event, whether it’s donating a bike, helping teach bicycle maintenance or handing a bicycle mechanic a cold beverage while they’re cranking on a bike. And if none of that pushes your pedals, there are a couple group rides, a meet and greet with the bike mechanics at Ska on Friday, and a wrap-up and send-off party on Sunday as well.

“This is a community event,” Stetson-Lee said. Everyone who shows up makes this event possible, so I want to give a lot of gratitude and appreciation to partners who come in. When we’re all doing the right thing, it just kind of manifests. That’s how we know it’s the right thing.”