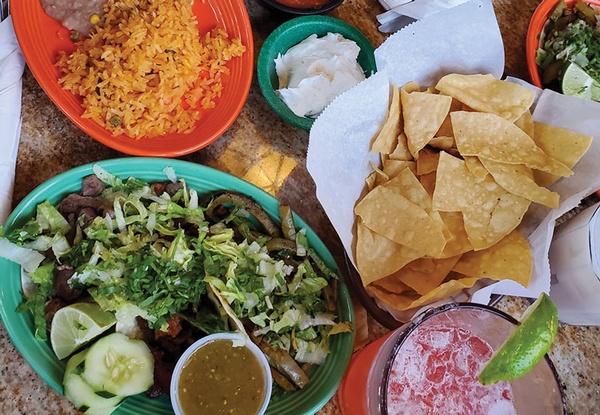 Here’s a simple question: What is it about Mexican food that makes it so enjoyable, so incredibly scrumptious, and so tricky to get just right? And why are there so many different opinions about what’s right or what’s wrong for a type of food that nearly everyone loves at least to some degree?

So many styles. So many different options. And so much opportunity for differences of opinion, points to debate and positions to stake out that you might wonder how anyone could ever be satisfied, let alone get a group to agree upon a spot to grab some enchiladas and a margarita. What is true Mexican food anyway? And does it even have to be “true” to be heartily chowed down late at night after a few too many cervezas? Is it possible for it to get all dressed up and dapper to be a high-brow option?

Street tacos seem to be all the rage right now, with multiple brick-and-mortar shops and food trucks across town specializing in the simple, representative street food one might find on any corner in Juarez, Oaxaca or Juan Tabo (a big street in Albuquerque). I recently had a couple of fish tacos from the newly relocated Cuevas Tacos, now at Lola’s Place, 725 E. 2nd Ave., and the fresh, bright, vibrant vegetables stacked on a supple, perfectly grilled slab of flaky white fish was a pleasant, energetic surprise. Seriously, the sweetly acidic, vinegar pop of the pickled onion and cilantro on that mildly spiced but oh-so-tender grilled fish was divine.

When I moved here from Denver, one of the “features” I noticed right off the bat was that Chipotle had not found our little dot on the map, and hopefully the competition from Zia, Nini’s and Macho’s keeps them away a while longer. I love cruising into Nini’s between downtown meetings and grabbing a quick burrito – they have enough options of fillings and salsas to create exactly what I am craving when I walk through the door. Zia, too, does a great job, especially with the excellent rooftop patio at the north location. You can’t go wrong with a trio of their carnitas soft tacos and a nicely balanced margarita out of a canning jar. That place was made for crisp fall days on the patio.

Nayarit has been one of my favorites for years, featuring a broad enough menu that it can pretty much handle any Mexican-style craving. But clearly their strength is with the seafood-influenced Pacific coastal style. I think their stews, like the Siete Mares or the Molcajete de Mariscos, is where they really shine. These are the dishes I think are the most signature and unique in their style. Every time one of those giant lava bowls full of octopus and shrimp and fish and clams shows up in front of me, my mind sparks back to standing on the northern Colombian coast, where we watched wooden fishing boats putter their way back to shore loaded with the catch of the day – and the tiny surfside huts with pots of boiling water, fresh tortillas and a hot grill ready to get those lunches into the hands of workers and tourists alike.

Hiding in the back corner of the Main Mall is another option with great seafood choices: Los Amigos Del Sur, which claims its roots in a more Southern Mexico/Oaxaca/Chiapas style, with classics like their delicious shrimp ceviche and Botanas Los Amigos (snacks with friends?), with fresh oysters, shrimp and fish ceviche, and shrimp aquachile (a spicier version of ceviche.) The Botanas dish is formidable, with plenty to go around for a group of friends, and both the bartender and the waitress were supremely friendly and welcoming.

New Mexican food is its own animal of course, with the traditional red and green chile so common across our neighbor state to the south. I spent eight years living in Albuquerque in the early 1990s, and thanks to my co-workers who knew all the nuances of that city’s food scene, I became indoctrinated in so many different choices across Albuquerque and Santa Fe, not to mention the tiny cafes and carnicerias in towns and villages across New Mexico. I think one of my favorite restaurants in the country is Cafe Pasquale’s in Santa Fe, but that is for another day. Gazpacho’s seems to be the most committed to the New Mexico style here, and I don’t know how many platters of green chile chicken enchiladas I have crushed over the years, but they are always an option if you are craving some Christmas (a red and green chile mix) any time of the year!

Then there are the more family-oriented options like La Hacienda, Tequila’s and the new Mi Ranchito, which took over and remodeled the former Brew space early in the pandemic. These spots focus on a solid plate of food for an affordable price, and with their blend of traditional Mexican and Tex-Mex fare, they do a fine job for locals and tourists alike.

Lastly, while “fine-dining” Mexican may seem like an oxymoron, I think Cantera made a pretty good run at it before the pandemic wreaked havoc on the entire restaurant scene. Fortunately, they were able to pivot to a more take-out and street-oriented approach, rebranding as Taco Libre while keeping their lively and popular bar more or less intact. Let’s face it, those tamarindo margaritas are simply too delicious to give up, even if they may be more bougie than authentic. Regardless, Roberto’s bar is a lively spot to meet friends and wind down with a few of his signature cocktails. There was an upscale Mexican and tequila restaurant in Denver that I loved (Tamayo) and I think there could still be a place in the Durango market for another try at this when things stabilize.

So while we likely can argue all day long about what’s right and what’s not about Mexican food in general, it’s hard to deny that for a town our size, we have many options in a number of different styles. From the food trucks and the coastal style to the family-forward and the more upscale, there are more than enough choices to argue about what’s hot and what’s not. The real question is, where do you want to hang out next?