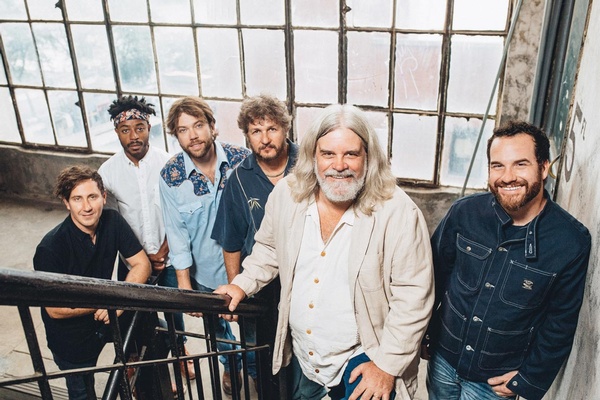 Leftover Salmon returns to the Concert Hall at 7:30 p.m. Saturday.

A band with a quarter century of history performing in Durango returns at 7:30 p.m. Friday when Leftover Salmon plays the Community Concert Hall. Head for the Hills opens the show.

One of my first paid writing gigs was to preview one of Left-over Salmon’s weekend residencies at the old Farquahrts back in 1992, prior to the release of their debut album, “Bridges to Bert.” Salmon would play three-night runs at Farquahrts, highlighted by monster three-set Fridays that included boisterous happy hours before a dinner break for the exhausted band and audience. Back then, LoS billed itself as “Polyethnic Cajun Slamgrass,” drawing as much from Southern rock and Zydeco as it did from bluegrass.

Within a few years, LoS had earned a spot on the H.O.R.D.E tour alongside Phish, Widespread Panic, Blues Traveler and others. Soon, they were hoarding coveted closing sets at Telluride Bluegrass, particularly after the major label release of their third record, “Euphoria.”

Leftover Salmon has never been a prolific recording outfit – they’ve dropped just six studio albums during their career (seven if you count the bizarre and delicious “O Cracker Where Art There?” collaboration with alt-country luminaries Cracker back in 2003). Still, each of these has become a treasure in the collections of countless mountain people. Whether you first caught them at Farquahrts, perhaps at Telluride Bluegrass, or even at one of their many Animas City Theatre dates, they’ve likely served as the soundtrack to your life at some point.

Herman and Emmitt are the lone two original members remaining. The ever-revolving bass chair was filled permanently in 2000 with the exceptionally talented Greg Garrison. After Vann’s 2002 death to pancreatic cancer, the band went through a brief rotation of banjo players, culminating with the hiring of Andy Thorn in 2010. More recent additions include drummer Alwyn Robinson in 2013 and keyboard player Erik Deutsch in 2016. Their song remains the same as LoS eyeballs its 30th anniversary. Friday’s show comes nearly 15 years after an epic two-night twin bill featuring Leftover Salmon and Sam Bush at the Community Concert Hall, one that saw each band alternate as openers and culminated with a giant clusterpluck at the end that featured Bush’s longtime bassist, Byron House, playing drums. LoS was famously banned from the venue when a mysterious backstage smoke set off the fire alarms during Bush’s first night set. Since then, the ACT has been their Durango home base. A return to the larger venue is likely a welcome one ... particularly for old farts like me with back pain. It’s nice to grab a seat once in awhile. Perhaps the band will be able to dust off ballads like Herman’s “Woody Guthrie” and Emmitt’s “Just Before the Evening.”

An alternative to (or nightcap following) LoS might be Tierro with Bridget Law at the Animas City Theatre on Friday and Saturday. Music starts at 9 p.m. with opening act J-Calvin’s Funk Express. Tierro Lee is a member of Kan’Nal and producer of the Arise Music Festival. He’s a guitarist who has composed instrumental music for two decades, including recent tunes that employ Arabian and Latin scales. Law, of course, is the fiddle player for Elephant Revival and handles vocals, while bassist Charlie Parker Mertens and drummer Jonny Jyemo keep time.

The latest KDUR Cover Night honors the late, great Tom Petty at 7:30 p.m. Saturday. Tickets for this shindig, which features more than a dozen local acts like Lawn Chair Kings and the Moetones performing Heartbreaker classics, quickly sold out. If you were shut out, I suggest lodging your complaint with Liggy. He loves it when you do.

It’s a Black Tie Affair this year at Snowdown, which kicks off Wednesday with such annual highlights as the Snowdown Fashion Do’s & Don’ts (noon at the Fairgrounds), scavenger hunt (noon-8 p.m. at the Billy Goat Saloon in Gem Village), bartender’s contest (4:30 p.m. at Moe’s), Spellebration (5:30 p.m. at the Hank), butt darts (6 p.m. at BREW) and Jokedown (8:30 p.m., Derailed). My focus will solely be on the opening round of the Magical Musical Mystery Tour, as Liggy, Holteen, Bill Doherty and I attempt to return to the winner’s circle after back-to-back runner-up finishes to our frenemies from Southwest Sound. I expect Ted’s Chew Toy will eschew our usual shenanigans for old-fashioned sobriety this year. Excessive pints dull one’s ability to recall esoteric jive.

The Met: Live in HD resumes its schedule following a holiday hiatus at 10:55 a.m. Saturday in the Vallecito Room of the FLC Student Union with Puccini’s “Tosca.” The melodrama about a volatile diva, a sadistic police chief and an idealistic artist has offended and thrilled audiences for more than century. Critics have often had difficulty reconciling “Tosca’s” rather grungy subject matter, the directness and intensity of its score, and the crowd-pleasing dramatic opportunities it provides for its lead roles. But these same aspects have made it one of a handful of iconic works that seem to represent opera in the public imagination. Run time is nearly three hours, with a pair of intermissions.

Elsewhere: the Black Velvet duo returns to the Diamond Belle Saloon at 5:30 p.m. Friday, while Carute Roma brings its gypsy jazz to the Mancos Brewery at 6:30 p.m. Friday.

I’m asked on occasion about the best thing I’ve listened to recently. This week is easy: Kyle Craft’s second album, “Full Circle Nightmare,” which hits the streets Feb. 2 on Sub Pop Records. Craft is the heir apparent to Ziggy-era Bowie. His latest record, much like his first, smells like your old college living room did the morning after a kegger ... like sex, whiskey and vomit. He’s the last of the glam rockers and this might be the best rock record since “Exile on Main Street.”

Floatin’ around on a belladonna cloud? Email me at chrisa@gobrainstorm.net.