A leap of faith 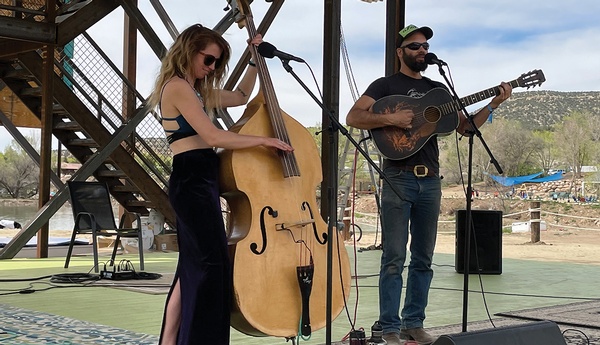 As I watched someone take a 60-foot freefall leap of faith off the third deck of the Tico Tower just to the right of the stage where Leftover Dust Farm was performing last Friday, I realized that the 2021 festival season would be weird.

The COVID-19 pandemic may have cancelled our entire festival season a year ago, but in 2021, it’s on … sort of … fingers crossed.

I ventured a mile south of the state line last weekend for the inaugural Tico Time Bluegrass Festival, the first of 10 music festers to be held at Tico Time Resort on the banks of the Animas River. After making the short walk from the parking area past the campgrounds, I saw the ever-present row of porta-potties that alerted me I was close. From there, I could see a foot bridge across the Animas leading to the festival grounds. Behold, a three-story zip line tower, two ponds with people rafting, kayaking, paddleboarding and watersliding, a sizable stage, and several hundred people getting their bad self on in a sand dance area while a bluegrass band belted out high and lonesome sounds.

This is Tico Time – a water park and adventure-themed campground that just so happens to have music festivals going on in the background. It’s like Water World meets Chuck E. Cheese meets the Planet Bluegrass Ranch, only with fewer rules.

I crossed the bridge and was greeted by dozens of my closest festival friends, including 75-year-old Telluride Tom on his scooter. Known as the Mayor of Telluride, Tom holds court at numerous festivals across the Western Slope. He’s currently recovering from cancer treatments but braved the pandemic in order to catch a few acts and have a beer or two with friends.

Masks were few and far between at Tico Time. I had mine on when I checked in at the ticket entrance, but quickly realized I was the only person wearing one and dropped my guard out of peer pressure. I think I saw fewer than 10 masked people both days I attended. Once inside the grounds, dozens of friends asked if I’d been fully vaccinated; when both parties confirmed this, hugs were exchanged. Not the big ol’ bear hugs I’m used to giving, but quick, timid, nice-to-meet-you kind of hugs you’d give a great aunt at a family reunion.

Let’s face it: the virus was there. We’ll see how well it transmits outdoors at an unmasked event and how well the vaccination works in the next week or two.

Rules are eschewed at Tico Time. It’s a dog-friendly, BYOB affair that openly advertises on social media New Mexico’s non-existent regulations for using marijuana at outdoor events. People defied any state or local COVID guidelines, other than spreading their festival chairs a good 6-10 feet away from the next pod of people … other than in the shade, which was coveted ground and packed chair-to-chair in the near 90-degree heat.

What didn’t matter was that the lineup was a bit light on headliners. The locals made a huge showing – regulars like StillHouse Junkies, Six Dollar String Band, Liver Down the River, the Robin Davis Duo, La La Bones, High Country Hustle and a half-dozen more were primed to finally play in front of a large crowd again. Their energy was contagious. Calling StillHouse, Six Dollar and Liver local is somewhat limiting. All three groups have reached some level of regional and national success, and their stars are rising and bright. I felt like a proud papa watching the audience swoon over my friends who are nearly a generation younger than me.

The headliners that I encountered – Leftover Dust Farm (Greg Garrison and Alwyn Robinson from Leftover Salmon, Andy Hall from the Infamous Stringdusters and Tyler Grant from Grant Farm) and Denver’s Wood Belly – didn’t disappoint, playing spirited, jam-heavy sets. Dust Farm rarely veered from the Grateful Dead and Stringdusters catalog, choosing crowd-friendly tunes to get the literal dust flying. I also discovered a new favorite in Pittsburgh’s Jakob’s Ferry Stragglers, which is a quintet that walks the line between bluegrass and old-time. I hope they make their way to future festivals in our region.

The lack of Sam, Tim, Peter, Yonder and other festival headliners didn’t matter. Hell, even COVID-19 didn’t matter … We were happy just to see each other and dance.

I didn’t drink at Tico Time, the first sober festival of my life. I’m in a medically necessitated alcohol-, sugar- and carbohydrate-free stage of my life right now in an effort to lower my blood sugar levels and lose weight. It’s working – 15 pounds in three weeks. My festival diet consisted of a dozen or so 40-ounce bottles of filtered water per day, a couple of hard-boiled eggs and a few ounces of garlic and green beans sautéed in olive oil. Two years ago, I’d have easily pounded a 12-pack each day and a half-dozen cocktails.

Later this spring, through the summer and into autumn are blues, country, jam, rock, EDM and other festivals, with lineups still being booked.

The next event at Tico Time is its reggae festival from May 13-15. Longtime KDUR DJ and lifelong reggae musician, historian and fan Rasta Stevie is helping with production and promotion for festivals. Expect no less than a top shelf lineup from Stevie – Dan Kelly (of Fortunate Youth), Karim Israel (Arise Roots), Zeb (of Tribal Seeds), Tomorrow’s Bad Seeds, Perfect Giddimani and Lion Heights are among the 20-plus acts to perform.

I’ve missed that smile on your face? Email me at chrisa@gobrainstorm.net.