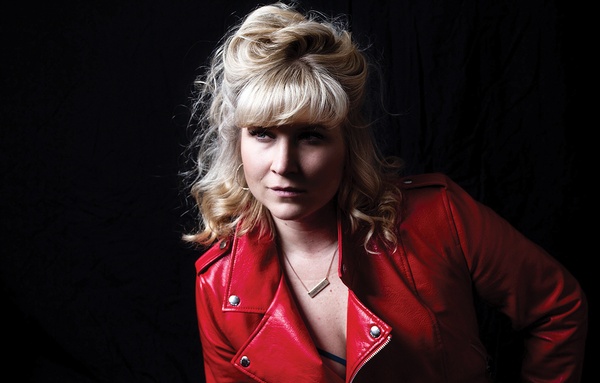 Many businesses and nonprofits have struggled through the first four months of the COVID-19 pandemic and the economic shutdown that followed. Among those affected the most are music and the arts. Whether it’s a big festival like Telluride Bluegrass or a small, intimate venue, stage lights dimmed, doors locked and revenue dried up. Musicians and artists, their road crews, sound engineers, lighting technicians, stage hands, ticket salespeople, caterers, bartenders, security personnel and everyone else associated with live music production saw their paychecks disappear.

Here in Durango and surrounding areas, we’re fortunate to have a few resources to assist these folks out. One group that’s worked tirelessly to help is the Community Foundation Serving Southwest Colorado, which has organized a virtual and radio concert series called Community Concerts Reimagined in Your Secret Garden. Spread out over three Wednesdays from July 1-15, local musicians and arts groups will be featured on a one-hour radio program that will be simultaneously aired on KDUR and KSUT from 7-8 p.m. each week. The shows replace the popular Community Concerts in the Rochester Hotel’s Secret Garden, which had become midweek highlights to the local music calendar each summer.

Nine musicians and bands will be featured (three per episode), as will interviews with 10 nonprofits (three to four per episode) and information on how you can support the cause. KDUR station manager Bryant Liggett and yours truly (I’m KSUT’s development director) will “emcee” the series. KSUT executive director Tami Graham will interview the nonprofit beneficiaries.

“I’d like to thank the Community Foundation and their leadership in support of arts and culture-related nonprofits in our area, as we’ve all been hard hit due to the impacts of COVID,” said Graham. “Many of these organizations rely heavily on attendance at live events and cultural experiences for their lifeblood. Funds raised from this series will provide vital operational support to these nonprofits until they can get back to doing what they do best.”

In lieu of live performances, the stations will tap into the recorded catalog of each musician or group. The Badly Bent, Black Velvet and Kirk James Blues Band will be featured on July 1; Leah Orlikowski, Farmington Hill and Lost Souls on July 8; and Caitlin Cannon, People We Know and the Jeff Solon Jazz Trio on July 15. Listeners can expect 12-14 minutes of music from each, spanning rock, Americana, bluegrass, blues and jazz genres.

“I really appreciate the opportunity,” Erik Nordstrom, a local musician who sings and plays guitar for Farmington Hill and Lawn Chair Kings, said. “We’re not making money these days, and I still have to pay for the website and (other) operating costs. Any money raised could go toward recording. You don’t make much money off of albums, but it costs money to record.

For Nordstrom, live dates from his two bands have been nonexistent. Farmington Hill reconvened for its first band practice since the pandemic began earlier this week. They have one concert currently on the books – July 26 at Mancos Brewing – and a handful of Durango possibilities pending the state of the pandemic and reopening of venues. “I feel like they’ve been trying to be really safe,” he said of Mancos Brewing. “They’ve expanded their outdoor seating, have levelled some land and placed extra tables outside.” Nordstrom said one way to support local bands is by purchasing their music. Both Farmington Hill and Lawn Chair Kings have CDs and downloads available through their respective websites, which link to the national independent distribution company, CD-Baby. That site connects musicians to Apple Music and other streaming services.

Some of the artists featured in Community Concerts Reimagined have recently released albums but don’t have the chance to sell their wares to a live audience. People We Know dropped their debut disc, “Hard Times & Joy Rides,” last winter, but couldn’t sell the record at the cancelled Durango Bluegrass Meltdown this spring. Caitlin Cannon’s “The TrashCannon Album” is garnering rave reviews nationally in the alt-country press, but she has no chance to tour in support of it. Others, like Farmington Hill and Lost Souls, had recording plans scuttled.

Musicians are just one group that is struggling, however. The nonprofit groups are another. There are dozens of nonprofits in Southwest Colorado committed to music and the arts. Some put on festivals and concerts, others offer galleries for artists to display their work, and others are educational in nature.

The Community Foundation has set a goal to raise $50,000 through online donations. As of Tuesday, more than $10,000 had been raised. Donations can be made at swcommunityfoundation.org by clicking on the “Community Concerts” advertisement.

Additional support was provided by Four Corners Community Bank, Tito’s Vodka and the Rochester Hotel. In previous summers, the Rochester hosted live music in its Secret Garden on Wednesday evenings, raising money for a variety of local nonprofits through donations and beverage sales ... hence the name change to Community Concerts Reimagined in YOUR Secret Garden.

The virtual component is a series of Facebook videos done by the bands and nonprofit beneficiaries. Many of these show the directors of nonprofits enjoying signature cocktails at local bars and restaurants. Angie Beach, executive director of Music in the Mountains, posted a video of Season’s lead bartender Colton Mowrer whipping up “The Waltz,” a vodka martini made of Tito’s, Fleur elderflower liqueur, sauvignon blanc and lemon juice, shaken vigorously over ice, then strained into a martini glass rimmed with oils from lemon zest. Other nonprofits and musicians will team up with different bartenders and restauranteurs to craft their own signature Tito’s cocktail.

“We’re encouraging listeners to select a location, invite a few ‘quaranteam’ friends and safely gather to have your own secret garden show,” said Wrinkle. 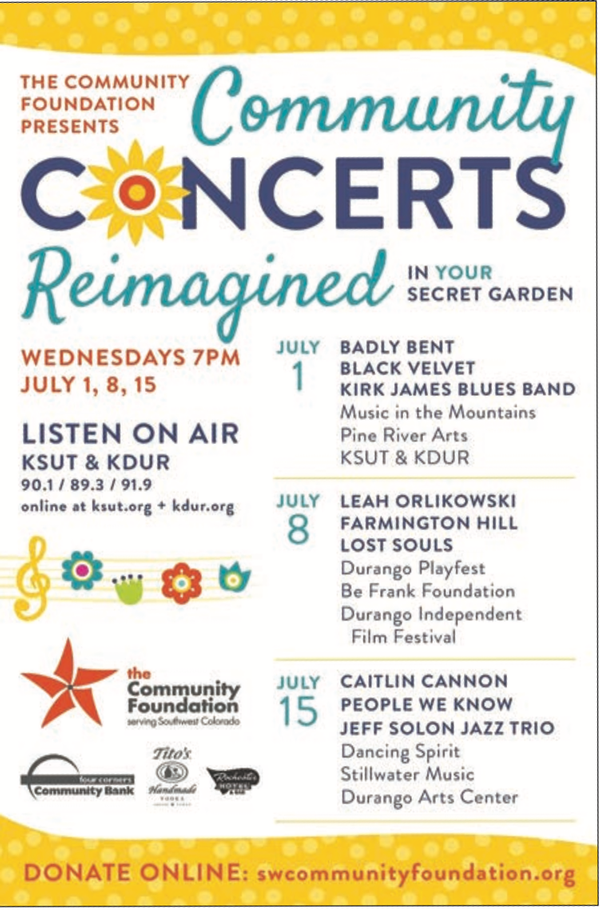 What: Community Concerts Reimagined in Your Secret Garden
When: 7 p.m, July 1, 8 & 15
Where: Online & on air at KSUT or KDUR For info: swcommunityfoundation.org