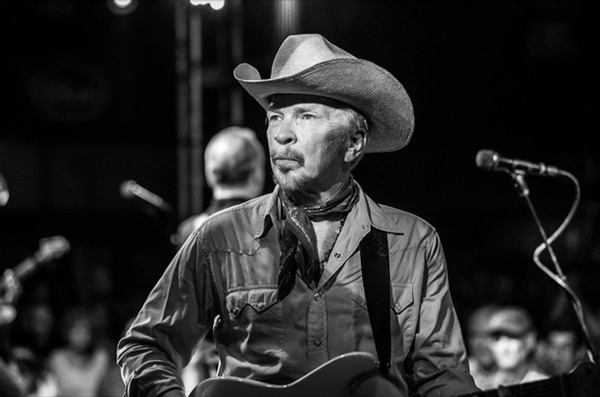 Durango will be blessed with Americana royalty when Dave Alvin, pictured here, is joined by Jimmie Dale Gilmore at the Hank on March 22

Americana: it’s the mix of the traditional homegrown musical styles of the Carter Family, Jimmie Rodgers, Bob Wills & his Texas Playboys, Robert Johnson and Hank Williams, spiced with heaping spoonfuls of Elvis Presley, Little Richard, Ray Charles, Gram Parsons, Willie Nelson and the Ramones. It’s truly the roots of contemporary American music. And for listeners of my “Tales of the New West” radio program (7-9 p.m. Wednesdays on KSUT), Americana simply rules. And rocks. Durango gets treated with two of the genre’s elder statesmen at 7:30 p.m. Wednesday when Dave Alvin & Jimmie Dale Gilmore take the stage of the Henry Strater Theatre in the latest KSUT/Hank coproduction. Fewer than 50 tickets remained as of press time. This one will sell out.

In February 1986, the day after my Wheat Ridge High School basketball team had been eliminated from state playoff contention by Bear Creek, my buddy Shawn Nichols’ father treated us to a concert by the Blasters at Denver’s Rainbow City Music Hall. The Blasters were a rockabilly revival band fronted by singer Phil Alvin and his little brother Dave. I gotta admit that us two 17-year-olds managed to chug more than our share of cold brews that night. Thirty-one years later, my love affair with both the roots rock guitar slinger and fine ales still remains.

In the years since, Dave Alvin has slung his guitar for X, the Knitters and the Pleasure Barons, plus duo projects with older brother Phil, rockabilly legend Sonny Burgess and countless other acts. I’ve personally booked him four times for local gigs that ranged from folk and blues to good, old-fashioned rock & roll. He’s the truth.

Jimmie Dale Gilmore, in the other corner, is a veteran of the Flatlanders, a Lubbock, Texas, outfit that also counts Joe Ely and Butch Hancock among its alumni. His tunes “Dallas” and “Tonight I Think I’m Gonna Go Downtown” have become staples in the alt-country genre. He also famously portrayed “Smokey,” the pacifist bowler in the Coen Brothers classic, “The Big Lebowski.” I mention this not to downplay his role in Texas troubadour history, but rather to highlight that movie’s role in my degenerate life. Cheers if you like white Russians.

I’ve often referred to shows as “can’t miss” or “the show of the year” in Durango. This one is the latest in that series. Two legends. Two guitars. Two stools. A songwriter-in-the-round affair featuring two of the greatest voices in Americana music. Ever.

It’s another night of electronica at the Animas City Theatre tonight (Thurs., Mar. 16) when Late Night Radio and Maddie O’Neal take the stage. LNR, the pseudonym of Alex Medellin, has made his mark in Denver’s vibrant electronic scene, while Maddie is a rare female leader in the male electronic scene. Doors open at 8:30 p.m., with the show to follow at 9.

I gotta tell ya, Tauk’s kinda cool. Their third studio album, “Sir Nebula,” is an instrumental album that blends funk, hip-hop, progressive rock and jazz. The Oyster Bay, N.Y.-bred rock-fusion quartet (bass/drums/guitar/organ) headlines a jamtronica twin bill that also features Greener Grounds on Saturday night at the ACT, with doors at 8:30 and music at 9.

My wife and 10-year-old are excited about this one: Cirk La Putyka brings visual poetry, physical comedy and a dash of contemporary circus to the Community Concert Hall at 7:30 p.m. tonight when it unveils its “Slapstick Sonata” to the Durango crowd. The pride of the Czech Republic, Cirk La Putyka is revered as one of Europe’s greatest physical theatre companies.

Here’s something different for St. Patty’s Day, an amateur drinker’s holiday that often features corned beef & cabbage, green Bud Light and 20-something girls running around in green French maid’s outfits at your favorite watering hole. The Durango & Silverton Train rolls out of town with the second annual St. Patty’s Day Express at 9:45 a.m. Friday. Traditional Irish music will be provided by the Kitchen Jam Band, with tasty Irish beer and handcrafted cocktails, artisan corned beef sandwiches from The Yellow Carrot, and more. The train will, of course, be decorated with Irish flair and guests are encouraged to wear costumes or green attire to celebrate the holiday. For college hoops fans, the 2:45 p.m. return to Durango leaves plenty of time to hit the bars for the Duke and Kansas games.

BREW Pub & Kitchen will open early today and Saturday for diehards wanting to embrace March Madness, or so I hear. Since Friday is St. Patty’s Day, traditional Irish fare will be offered, along with all the stout and whiskey you can responsibly drink.

Elsewhere: the Black Velvet Duo plays the Diamond Belle at 5:30 p.m. Saturday; and DJ Harry’s Rockstar Dance Party takes over the Sheridan Opera House in Telluride at 9 p.m. Saturday for those still seeking the steep and deep and an apre?s dance party.

Both Dave Alvin and Jimmie Dale Gilmore recorded for Oakland’s legendary HighTone records in the 1990s. Sadly, the label went under in 2008. This week’s Top Shelf list recalls a 12-pack of HighTone artists:

1. Dave Alvin put out arguably seven of his greatest records on HighTone.

2. Big Sandy & his Fly-Rite Boys released seven records of Western swing and rockabilly in the 1990s and early ’00s.

3. Robert Cray had several classics in the early ’80s before breaking big.

4. Deke Dickerson. With the Ecco-Phonics, he simply jammed contemporary rockabilly.

5. Ramblin’ Jack Elliott. “Friends of Mine” and “The Long Ride” are folk classics.

6. Rosie Flores. Check out “Rockabilly Filly.”
7. Jimmie Dale Gilmore ... Two of his finest.
8. The Hot Club of Cowtown. Some of the finest Western

swing ever recorded.
9. Laurie Lewis & Tom Rozum were late additions to the label.

of the Decade” for the 1990s.
11. Tom Russell delivered countless classics on HighTone.

“Borderland” is my favorite.
12. Chris Smither. One could argue that Smither’s finest works appeared on HighTone.

She calls toll-free? Email me at chrisa@gobrainstorm.net.