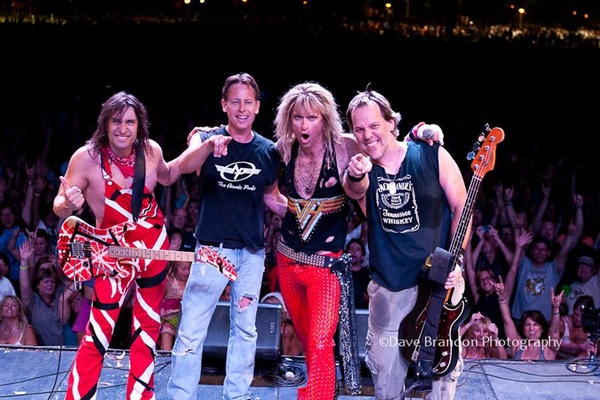 The halycon days of Van Halen will come back in a haze of smoke machines Saturday when L.A.'s Atomic Punks play Steamworks' 20th Anniversary bash from 5-8 p.m.

Thousands of Durangotangs packed into the parking lot of Ska Brewing’s World Headquarters last Saturday to help the Bodo boys celebrate their 21st anniversary. Per usual, it was a skankin’ good time.

This week, it’s Steamworks’ time. The Second Avenue brewery officially turned 20 this Wednesday, but the big bash takes place from 5-8 p.m. Saturday in front of the brew pub. Steamworks rolls out its original beer lineup to serve while the peeps dance the night away to the sounds of early Van Halen cover band, the Atomic Punks. Sadly, David Lee, Eddie, Alex and Michael couldn’t patch up their differences so these guys will have to do. They’ve been named L.A.’s best tribute band three years in a row and pay homage to the good stuff … the Roth era.

The last major highlight of the festival season rolls into Town Park this weekend with the three-day bacchanal known as Telluride Blues & Brews. For craft beer drinkers, the highlight is the three-hour binge from noon ’til 3 Saturday (56 craft breweries, including Carver’s, DBC, Ska and Steamworks). For blues fans, Gary Clark Jr., Anders Osborne, the Mick Fleetwood Blues Band featuring Rick Vito, Tommy Castro & the Painkillers and Jimmy Thackery & the Drivers are obvious highlights. And rock & rollers need look no further than Joe Walsh, North Mississippi Allstars and Shovels & Rope. My favorite? Jason Isbell, the Grammy-winning singer/songwriter who first gained acclaim in his stint with Drive-By Truckers. In addition to the main stage acts, check out the late-night juke joints, Blues Stage and Campground Stage. Many of the acts at the smaller stages are unforgettable (jump blues pianist Mitch Woods being a perfect example of a hidden gem). For those who wish to exercise before they imbibe, there’s even a Blues & Brews 5k on Saturday morning.

One Blues & Brews act that makes its way down to Durango is Moreland & Arbuckle, which plays the Balcony Backstage at 8:30 p.m. Sunday. The Wichita trio pulls from both Mississippi Hill Country and Delta blues, thus combining the stomp of acts like North Mississippi Allstars with the traditionalist sounds of Son House, Muddy Waters and others. Consisting of guitarist Aaron Moreland, singer/harmonica player Dustin Arbuckle and drummer Kendall Newby, they add obvious influences like country, folk and minimalist rock & roll. After a brief run on the bluesy Telarc label, they’ve recently moved to the genre’s biggest label, Alligator, for their latest release, “Promised Land or Bust.” Blues concerts in Durango are few and far between, so fans of the style should take note of this rare opportunity.

Timing is everything and in these politically charged times, making the message of Las Cafeteras particularly important. The sextet returns to the Community Concert Hall at 7:30 p.m. tonight, Thursday, celebrating the music, dance and stories of Mexican immigrants. The East L.A. group has a unique sound that fuses traditional son jarocho sounds with Afro-Caribbean instrumentation and rhythms and poetry in English and Spanglish.

An annual Concert Hall Tradition is Jazz on the Hill, a signature fundraiser that takes place each September to raise money for the Serzen endowment for the venue’s operations. This year’s event features the Joyce Lyons Jazz Ensemble and gets under way at 6 p.m. Saturday. Lyons, an acclaimed jazz vocalist, will be joined by Graydon Peterson (bass), Jay Epstein (drums) and Phil Aaron (keyboards). Lyons, who has been described as “what Cabaret is all about,” was a favorite vocalist of the endowment’s namesake, the late Russ Serzen.

Federale, a “spaghetti western” band that comes highly acclaimed from KDUR program director Jon Lynch, drops by El Rancho at 8 p.m. Sunday promoting their newest record, “All the Colours of the Dark.” Federale is a seven-piece ensemble based in Portland, Ore., led by longtime Brian Jonestown Massacre bassist Collin Hegna. The band was conceived as an outlet to channel inspiration from ’60s and ’70s European soundtracks, particularly those from Italy made famous by the Spaghetti Western & Giallo genres.

If a midweek jaunt to Telluride is in order, reggae legends the Wailers play the Sheridan Opera House at 8 p.m. Wednesday, with an opening set by Niceness. Even novices know the Wailers as Bob Marley’s backing band during his ’70s heyday.

Anada Gaia hosts a CD release party for its debut recording, “Sacred Elementals,” at 6 p.m. Friday at Groove U Dance Studios near Dietz Market. The group, which consists of Jennie Nuriya, Cheryl Birchard and Vanessa Morgan, compiles songs dedicated to each of the elements: earth, water, fire, air, oneness, Father Sky and Mother Earth. Included are songs in English and Kirtan chants in Sanskrit.

KSUT wraps up its fall membership drive sometime this week … when it hits its goal and quits. At that point, some lucky winner will pick up a week’s vacation at a swank Mexican beach resort (seven to choose from), valued at $1,500 per night! Airfare for two from Durango is included. Late week prizes include Fall Harvest Day and the Big 7 concert & dinner package, which includes seven shows at the Community Concert Hall (winner’s choice) and gift certificates to local restaurants. Pledge your support by calling 563-0255 or online at www.ksut.org.

This week’s Top Shelf list salutes my favorite early Van Halen, in honor of Steamworks’ big 20th anniversary party. For argument’s sake, we’ll consider the first four albums only … No knock to “Diver Down” or “1984” fans. It’s just that the first four albums rule. And the organizers promise the party will take you back to the era when you’d put on your favorite stinky pair of Vans, cruise down Colfax and chug a cold brew.

Have you seen junior’s grades? Email me: chrisa@gobrainstorm.net.