'Bama-boozled, Supersuckers and Magic Beans
The Supersuckers celebrate 30 years with a show at the ACT Friday 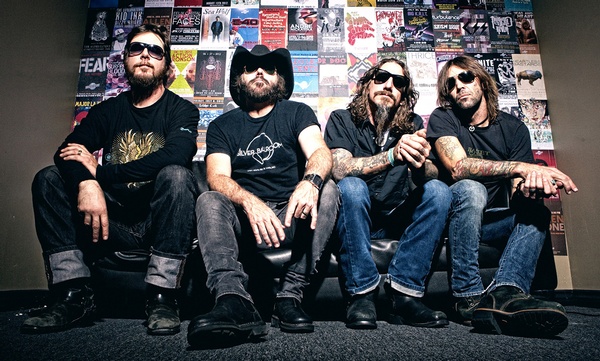 You might think a diehard Alabama fan like me would have cried in his beer or smashed shit when No. 2 Clemson routed the top-ranked Crimson Tide 44-16 Monday night in the College Football Playoff Championship Game. Think again.

I adopted the Tide several years ago for a variety of reasons. First and foremost, my father-in-law is an obnoxious Ohio State loyalist who despises all things SEC. Since he lived in Birmingfham for a few decades, he particularly loathed ’Bama. Score one for the champs.

Then, after 22 years in the employment of my alma mater, I was fired in the same meeting as my wife in April 2013. For 22 years, I’d shed blood, sweat and tears in intercollegiate athletics – I was back at work the day after my infant son’s death and a week after having an artificial valve placed into my heart. Four months later, Shelly and I were let go – in my case, with no explanation other than I was an “at-will” employee. During those 22 years, I watched mens soccer win three national titles and most of our other sports advance to the NCAA Division II playoffs. One team, though, struggled: football. The alma mater ranked fourth worst in NCAA history in winning percentage. I was rooting for loveable losers all those years. Once I became a free agent, I hitched my pony to Nick Saban.

But one thing I always loved the most was a good rivalry: Avs vs. Red Wings, Celtics vs. Lakers, Red Sox vs. Yankees, and Duke vs. North Carolina were all Must-See TV in the man cave. Super Joe had Stevie Y. Bird had Magic. Coach K had Dean Smith. Today, Saban needs Dabo. Three things stood out Monday night. First, Saban knew he was outmatched.

That’s why he kept going for it on fourth down, even when the game was still close. Second, Clemson dominated the line of scrimmage on both sides of the ball. A hefty lad like me always appreciates when the big’uns in the trenches slap one another around. Finally, Clemson had two of the best freshmen I’d ever seen, in quarterback Trevor Lawrence and wide receiver Justyn Ross. Lawrence showed the poise of NFL legends like Joe Montana or Brett Favre, with the physical attributes of John Elway. And Ross? He’s a cross between Lynn Swann, Jerry Rice and Odell Beckham Jr. Barring injury, those two should be making headlines for decades.

Without Clemson, there’s no mystery left in college football.

Dynasties like Alabama’s are boring. Rivalries breed passion. So I raise my cup to Dabo Swinney and his charges. See you in a year!

The Supersuckers return to the Animas City Theatre this Fri., Jan. 11, on their 30th anniversary tour. If anything, these guys are survivors. They survived punk, grunge and metal. Lead singer and bassist Eddie Spaghetti survived throat cancer. Although the lineup has changed, the bombast remains the same. This time around, they open with a 45-minute country set, followed by performances of their first two records in their entirety: “Smoke of Hell” and “La Mano Cornuda.” They’ll close with new  songs and old hits. Doors open at 8, with an opening set by the Hangmen at 9.

I’ve had the pleasure of seeing the Supersuckers a handful of times. One epic show at the ACT, back when it was still the Abbey Theatre, began with an acoustic, solo Eddie Spaghetti set (where he ended every song with “Cha Cha Cha”). It featured a spirited country jam thrown by Denver’s the Railbenders (Eddie joined them for duet vocals on Hank Williams Jr.’s “O.D.’d in Denver”) and ended with a cowpunk rave-up. The boys moshed, indeed. Not long afterward, they headlined one of the Ska anniversary parties at the World Headquarters ... one I miraculously made it to the end of. Mark my words: if you are a fan of punk, alt-country or good old-fashioned rock & roll, you’d be a fool to miss this one.

The ACT spreads the jam thick at 9 p.m. Sunday when Denver’s Magic Beans comes to town. Their latest album, “Casino Cabaret,” takes its name from a vintage sign that hangs above one of the Mile High City’s legendary venues, Cervantes Masterpiece Ballroom. It’s a place (albeit one that went by different names through the years, much like the ACT) where jazz, soul and funk masters plied their craft for decades. The Bozeman bluegrass band, the Kitchen Dwellers, opens.

Yeah, I watched “Friends” back in the ’90s. I wasn’t going to hook up with Rachel, so I figured I might as well root for Ross. The winter portion of the Community Concert Hall season gets under way at 7:30 p.m. Wednesday when “FRIENDS! The Musical Parody” sends up the hit sitcom. Like the TV show, six twentysomethings navigate the pitfalls of work, life and love in the big city in the 1990s. But leave the kids at home – this version is uncensored and fast-paced.

One of music’s legendary debates gets waged at 7:30 p.m. Saturday at the Farmington Civic Center when the ultimate mythical battle of the bands pits the Beatles vs. the Stones. In one corner, representing the Fab Four is Abbey Road, one of the country’s top Beatles’ tribute bands. Featuring brilliant musicianship and authentic costumes and gear, they play songs that span the entire career of Liverpool’s favorite sons. In the other corner is Satisfaction – the International Rolling Stones Show. They’ll recreate the magic and music of Mick, Keith and the bad boys of the British Invasion.

Get your opera on when The Met: Live in HD continues with a new production of Cilea’s “Adriana Lecouvreur” at 10:55 Saturday morning in the Vallecito Room of the FLC Student Union. Run time is three hours, 16 minutes with a pair of intermissions. Lecouvreur unfolds in Paris in 1730, and its setting reflects a nostalgia for the Rococo era that swept over Europe and the Americas around the turn of the last century.

Elsewhere: La La Bones returns to the Ska World Headquarters from 5-7 p.m. tonight (Thurs., Jan. 10) to soak in the suds and bathe their fans in bluegrass; and Kirk James plays solo blues at 6 p.m. Saturday at the Seven Rivers Steakhouse at the Sky Ute Casino Resort in Ignacio.

Fresh out of minimum wage? Email me at chrisa@gobrainstorm.net.