Belly full of wood, mountains full of ukes and Ridin' into Telluride 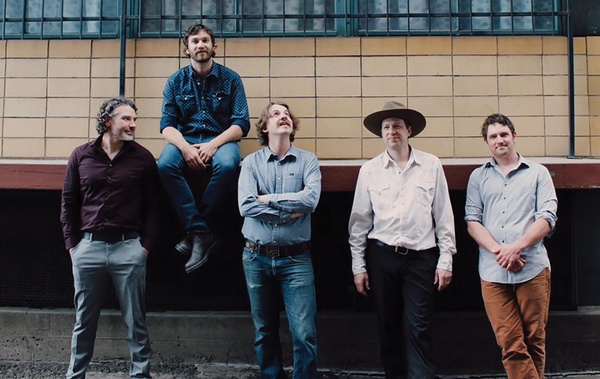 “Momentum is the key!” That was a favorite saying of my old man, Mr. Bill, when he was teaching me to drive back in 1984. In particular, he was referring to driving up mountain passes. But, like many Mr. Billisms, it had multiple meanings. Namely, if you work hard and good things start happening to you, then keep the foot on the gas pedal. After a sophomore year on the Wheat Ridge High School junior varsity basketball team, I spent the next spring solidifying my position on the varsity.

All it took to derail my plans was an injury. That came in the form of an attempted blocked shot on a breakaway during Smoky Hill league. A guy who was driving down the court stopped when he shot his layup. I went flying through him, getting upended while managing to get my right arm caught in the net. Gravity ripped the shoulder out of its socket and next thing I knew, I was getting a ride to the hospital.

By the time I was back from four weeks on the IR, the seniors I was trying to displace had secured their spot on the roster. I went back to JV to get in shape and wouldn’t regain my starting spot on varsity until the following year.

A lot of bands lost their momentum during COVID-19. One of them, Wood Belly, makes its triumphant return to the Animas City Theatre for an 8 p.m. show Saturday night. Wood Belly shot onto the scene in 2018, a year that saw them play the Durango Bluegrass Meltdown, release their debut album, “Solid Ground,” earn an IBMA Momentum nomination and win the Telluride Bluegrass Festival band competition. To achieve the latter, they had to outdistance StillHouse Junkies, the Durango trio that had been born just a year earlier.

One of the perks in winning Telluride was having Planet Bluegrass foot the bill for an EP, which was released in 2019, followed in quick succession with an appearance on Telluride’s Fred Shellman Memorial Stage and a follow-up full-length record, “Man on the Radio,” just before the Christmas holidays. The second album was a strong effort – one that should have cemented their spot at the forefront of an already full slate of up-and-coming Colorado bluegrass, newgrass and jamgrass bands. On their heels were that hardworking Durango trio, StillHouse Junkies; the Boulder quartet, Bowregard; the Westside suburbs group, The Wrecklunds; and countless other groups from the Western Slope and Front Range. It was somewhat competitive, fighting against each other for club gigs, festival spots, and opening slots for bigger names like Leftover Salmon, Yonder Mountain String Band and The Lil’ Smokies.

Thankfully, live music is back. From what I saw and heard at Tico Time’s inaugural bluegrass festival a few months ago, Wood Belly hasn’t missed a step.

The Rocky Mountain Ukefest is back, running from tonight (Thurs., July 8) through Sunday at a host of venues. with headlining presenters Jack & The Vox, Daniel Ward, Marnie Ward and Devin Scott. The duo of Jack & The Vox is the biggest catch, with Ukefest veteran Victoria Vox (ukulele, vocals) returning, only this time accompanied by her duo partner, Jack Maher (bass ukulele, guitar, vocals). Daniel Ward is a seasoned educator, composer and performer best known for his Latin style, infused with jazz and pop. Marnie Ward (no relation) is a playwright, vocalist and artist who has carved out a niche delivering singing telegrams along the Front Range, dressed in vintage outfits that harken back to the day of The Andrews Sisters, Doris Day and Frank Sinatra. Scott is known for his big voice, big beard and wicked dance moves.

Highlights include the RMUF All-Star Band at 7 p.m. Saturday at the Community Concert Hall (featuring all of the featured presenters); an open mic hosted by Devin Scott at 7 p.m. Friday at the Animas City Theatre; the Early Bird Concert and dance party at 6 p.m. tonight at the 11th Street Station (featuring Scott, Marnie Ward and The Rim Trio); and a classic cowboy uke jam featuring Gary Cook of the Bar D Wranglers from 11-1 Sunday at Serious Texas BBQ South.

The Ride was a bit different this year, with the town and promoters agreeing on a 10-day, indoor, limited capacity event vs. a jam-packed outdoor festival in Telluride Town Park. It got rolling last weekend and continues through Sunday with a number of performers at a variety of venues.

Highlighting the list is Warren Hayes, former lead guitarist for both The Dead and The Allman Brothers Band, founding member of Gov’t Mule, solo artist and producer. Haynes plays the Palm Theatre at 9 p.m. Friday and Saturday. With a capacity of 586, there’s a good chance you’ll be able to boogie with Warren if you attend.

The Sheridan Opera House is limited to 265 tickets this weekend, but with Rival Sons, Black Pistol Fire and Rose Hill Drive performing, it should be hopping. I’m a big fan of all three, having seen Rival Sons and their L.A. hard rock sound numerous times in Town Park as well as a small club in LoDo. Black Pistol Fire is an alt-country band out of Austin, Texas, that demands more attention than they get.

There’s plenty more to get excited about, too, at smaller venues, including four nights of Big Something, the last of three straight shows by the Jerry Joseph Duo (old-timers remember his many shows at Farquahrts in the late ’80s and early ’90s with his old band, Little Women), and a few other acts. Ridefestival.com is your source for tickets and an updated schedule. And don’t worry – The Ride will move back outside in 2022.

And then there were six (again). With the opening of Anarchy Brewing (across the street from Sonic and next door to Macho’s), the South Side has its first brewpub since BREW closed down a few years back. Anarchy joins Ska, Steamworks, Carver’s, Animas Brewing and the other semi-newbie, High Trestle Brewing, which is located the old Durango Brewing building. Welcome to Matt “Sully” Sullivan and his crew!

It’ll set your head on fire and make your kidneys scream? Email me at chris@ksut.org.