Best of the fest, Tab Benoit and Naughty Professor 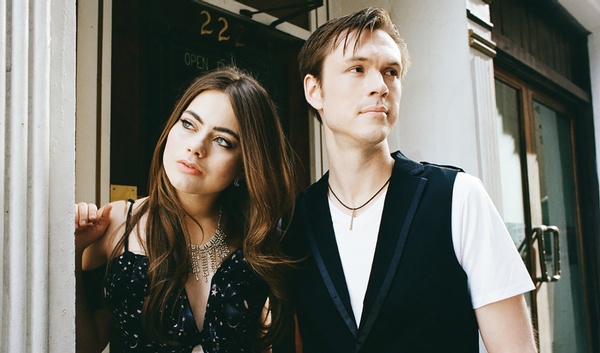 Kate Lee & Forrest O'Connor are among the acts performing at the 14th annual Pagosa Folk'n Bluegrass festival this weekend.

The 14th annual Pagosa Folk’n Bluegrass rolls onto Reservoir Hill this Friday through Sunday, bringing a host of bluegrass and indie folk bands to the region and offering the best camping/music combo festival around. The Del McCoury Band, Traveling McCourys, Sierra Hull, and Sam Reider & Human Hands are among the headliners. Regional favorites like FY5, Halden Wofford & the Hi*Beams and Bonnie & the Clydes are also back.

I’m excited to see Kate Lee & Forrest O’Connor, half of the Grammy-winning O’Connor Band. Forrest is Mark O’Connor’s mandolin-shredding son while Kate is Forrest’s fiddling and singing wife. In addition to the festival, they’ll perform a KSUT session live on the airwaves at 2:06 Friday afternoon. Another couple that’s intriguing is Wisconsin’s Dead Horses, an indie-folk duo that draws comparisons to Mandolin Orange, albeit with darker lyrical imagery.

I’ve been spinning their latest album, “My Mother the Moon,” quite a bit lately. And Old Salt Union is another relative newcomer I’m excited about. This newgrass quintet features a bassist/vocalist who is a hip-hop producer, several classically trained musicians and a horticulturist. They remind me a bit of Trout Steak Revival and the Lil Smokies, two other groups I first saw in Pagosa.

This year’s festivals on Reservoir Hill (the Four Corners Folk Festival takes place over Labor Day Weekend) are bittersweet. Since its beginnings 24 years ago, FolkWest events were driven by the husband-and-wife duo of Dan Appenzeller and Crista Munro. Dan and Crista were Pagosa Springs locals with a vision of producing large festivals on a beautiful spot that could be converted into seasonal festival grounds. They quickly realized that dream. Eight years ago, they relocated to Oregon and continued to operate both festivals from afar. They announced their retirement from FolkWest last week, meaning this year’s festivals are their swan songs. Crista will soon begin serving as the director of the Sisters Folk Festival in Oregon.

What does this mean for Four Corners festivarians? Hopefully not much. FolkWest is working with another local nonprofit to take over the festivals in 2020 and beyond, with hopes that not much changes. It takes a village to put together an endeavor like a major music festival. It’s likely that many of the same seasonal workers and volunteers that have served FolkWest in the past will continue to do so in the future.

I spent the past week wistfully reminiscing about what the festivals on Reservoir Hill mean to me. Musically speaking, I’ve been introduced to dozens of artists that have since become personal favorites. Live performances were among the reasons I first set foot on Reservoir Hill more than 20 years ago. During our early years, my wife, Shelly, and I would commute to and from Pagosa each day, take the bus up onto the hill, and pack tarps, chairs and coolers. We quickly discovered that it was the best on-site camping fester around. Where else are you in the middle of giant ponderosa pines, sheltering you from rain, wind and the sun’s rays? Plus, you could eschew festival-priced beer, run back to your campsite and slam a pint or two in between bands.

But what really sets this festival apart are the people. Dan and Crista have become friends, as has their dedicated staff. They aren’t just professional promoters who fly into the area a few weekends out of the year to throw a party... they were and remain committed to music fans in Pagosa Springs and the greater Four Corners. They’ll insist that what they created years ago forges forward into the future in good, loving, capable hands.

I’ve been to 11 of the previous 13 Pagosa Folk’n Bluegrass festivals (including its predecessor, IndieFest), missing just two due to the births of my children. Let’s hope this isn’t the end, but rather a passing of the baton.

Louisiana blues takes center stage at the Animas City Theatre when Tab Benoit and Eric Johanson perform at 8 p.m. Wednesday. Benoit has spent the past 30-plus years blending Delta blues with Crescent City R&B, Gulf Coast swamp pop and Cajun and Creole sounds. He’s a member of the Louisiana Music Hall of Fame and has won dozens of contemporary blues awards. Johanson is a New Orleans-based bluesman who has performed alongside the Neville Brothers, Anders Osborne, JJ Grey & Mofro and Eric Lindell.

It’s a new month, meaning a new firkin will be tapped at Steamworks at 3 p.m. Friday. This time around, it’s Cherry Ko?lsch, which sounds ridiculously refreshing. New brewer Doug Williamson developed the recipe, which, as advertised, is a tart cherry Ko?lsch. It’s based in Steamworks’ award-winning and popular Colorado Ko?lsch – a light, crisp ale that already has a hint of fruitiness. “Then put a cherry on top!” said head brewer Ken Martin. “Our preliminary taste testing found it did indeed taste like cherry pie with the Ko?lsch playing the role of the crust. Pretty delish for an early summer beer.”

iAM Music and Manatee Collective are collaborating with Durango Rapid Response to present the Artists Unite for Immigrants event at 5:30 p.m. Sunday at the Durango Arts Center. “Do You Know My Rights?” is a gathering of artists standing in solidarity for immigrants featuring art, dance, poetry, live music and a silent auction. The event will feature people of color and indigenous artists from Colorado and New Mexico, as well as members of the Colorado Immigrants Rights Coalition and Colorado Rapid Response Network providing the latest stream of information concerning immigration in our region.

Finally, Mountain Village’s weekly free Music on the Green concerts begin this Friday at Reflection Plaza. The entire summer lineup is stellar, with the likes of Sammy Brue (June 28), Robert Ellis (July 12), I Draw Slow (Aug. 2) and Freddy & Francine (Aug. 9) promising to be highlights. This week’s freebie features Brent Cowles, a Denver native who blends the soul-inspired vocals of Otis Redding and Sam Cooke with the outlaw country chug of Waylon Jennings. His “Cold Times” LP is a fascinating, intoxicating mix of the two, while his follow-up “How to Be Okay Alone” LP cements his reputation.

I’m going where the cold wind blows? Email me at chrisa@gobrain storm.net