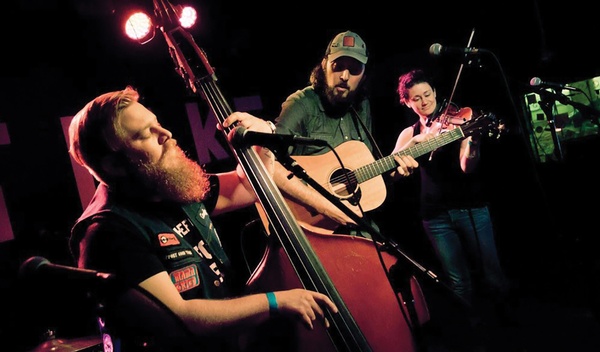 Now that was boring. Not only was Sunday’s Super Bowl the lowest scoring ever, but it was my first completely sober Super Bowl since 1986 ... and I was 17 then. Damn the family flu! Shelly, Otto, Rosie and I all came down with the crud. My annual Wild Game Super Bowl was called off. No pheasant pot pie. No elk steaks sizzling on the grill. No alligator sauce piquante. And my quail wrapped in bacon and stuffed with elk sausage? It’ll have to wait ’til spring.

Not only was the game boring and the food bland, but the commercials were cringe-worthy. Still, I selected two winners and one loser.

The Washington Post’s “Democracy Dies in Darkness” was my favorite. Airing just before the 2:00 warning, the 60-second spot narrated by Tom Hanks showed footage of major news events from World War II to present, and those who broke the news. It also showed three journalists who have either been killed covering the news or were abducted and remain missing. For anyone who ever crafted prose from facts and quotes – even weekly entertainment hacks like me – justice was served. Bonus points for inspiring Donald Trump Jr. to slam it the day after its airing.

My second favorite was the Bud Light jousting commercial that morphed into a “Game of Thrones” preview. Another 60-second spot, this one had Bud Light’s blue knight square off against a foe, only to get knocked off his horse and onto his ass. Cue the “Game of Thrones” theme music and an ominous dragon shadow cast over the jousting arena. Sure enough, one of Daenerys’ flying lizards emerged from the sky to ignite the stands into flames. Two thumbs up! Four for gore! And let’s face it ... Unless you’re a 16-year-old kid at a party or you live in a trailer with your sister/wife, Bud Light sucks. Score one for craft beer drinkers everywhere. But kudos to Anheuser Busch for sacrificing their knight to The Mountain.

My loser? Of all things sacred and pure, The Big Lebowski sold out The Dude’s ever-lovin’ soul for the chance to sip a Stella with “Sex in the City’s” Carrie Bradshaw. STFU, Donnie. Carrie eschewed her cosmopolitan for a draft, while The Dude nixed his White Russian for a bottle. What has this world come to? Have Sarah Jessica Parker and Jeff Bridges gotten so broke and irrelevant that they needed to hock green bottle yuppie brew? No, Mr. Lebowski! The Dude most certainly does not abide.

So that’s it. Pitchers and catchers report in a week. Meanwhile, back to the barrooms!

The StillHouse Junkies host an EP release party at 9 p.m. Saturday night at the Animas City Theatre, with cellist Russick Smith opening. “Hillbilly Poetry” collects five original tunes never before available on an album, and marks the band’s first recording as a trio. The lead track, “416,” was released as a digital single last summer, benefitting the Community Emergency Relief Fund set up by the Community Foundation Serving Southwest Colorado. Videos for “416,” “Whiskey Prison” and “Two-Steppin’ on My Heart (Again)” can be seen on the band’s website and various social media platforms.

Much like the Junkies’ debut record, “Over the Pass,” the EP showcases the music and words of Fred Kozak, a triple threat on vocals, mandolin and guitar. This time around, others are allowed to step into the spotlight. Fiddler Alissa Wolf’s backing vocals are prominent, and her jazzy violin adds Western swing elements (“Two-Steppin’” in particular). Upright bassist Cody Tinnin kicks off the record with a funky groove on “416” and later shows off on some rockabilly bass slapping. Gone is the bluesy element brought by original member Bruce Allsopp and his national steel guitar (Allsopp’s final performance with the Junkies was at last spring’s Durango Bluegrass Meltdown), but the additional musical space allows Wolf to shine. My biggest gripe with her past roles in both the Cannondolls and Lawn Chair Kings was that her fiddle was never prominent enough in the mix and her vocals nearly nonexistent. “Hillbilly Poetry” corrects that. The Junkies are quickly becoming more than Durango’s go-to choice to open bluegrass and Americana shows by bigger, national bands. Never ones to be content, they frequently travel to Telluride, Denver, Flagstaff and beyond to bring their mountain music to eager masses.

The ACT hosts an indie/jam twin bill Wednesday night with Aqueous and Big Something. Formed in Buffalo, N.Y., 13 years ago, Aqueous is a rock quartet that has earned a reputation as one of the most promising improvisational rock acts in the country by focusing on the groove. Their rich, transitional jams flow from laidback grooves to furious, high-intensity peaks. Big Something is a six-piece powerhouse that fuses rock, pop, funk and improvisation, taking listeners on a journey through a myriad of musical styles. They’ve toured in support of Umphrey’s McGee, Galactic, moe., Robert Randolph and the B52s.

Get your tango on when Luis Bravo brings “Forever Tango” to the Community Concert Hall at 7:30 p.m. Tuesday. Revered as the greatest tango show in the world, “Forever Tango” tells the story of the birth of the tango in 19th century Argentina. Thousands of European men emigrated to South American and found themselves in crowded packing houses, bars, barrio street corners and brothels. The tango was born from this lonely and violent existence. While the dance may inspire romantic feelings today, it wasn’t always the case. Argentinean society originally shunned the tango, which became an overnight sensation when Argentina’s intellectuals traveled to Paris. It quickly spread across Europe, then to America, and finally back home. Creator/director Bravo is a world-class cellist who has performed internationally with major symphonies.

The next Raven Narratives live storytelling event takes place at 7:30 p.m. Saturday at the Durango Arts Center. Perfectly timed for Valentine’s Day, the theme this time around is love. Stories must be true, relate to the theme, be 10 minutes or less, with no rants or raves and must also be told without notes.

Finally, Sunny & the Whiskey Machine brings bluegrass and Americana to Ska from 5-7 p.m. tonight (Thurs., Feb. 7). Here’s to one of Durango’s most unheralded bands!

Smokey, my friend, you are entering a world of pain? Email me at chrisa@gobrainstorm.net.