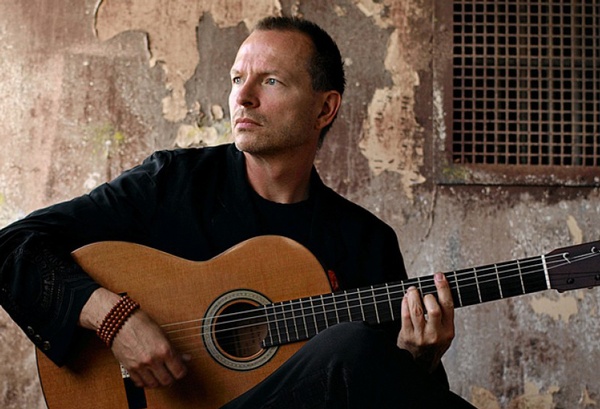 German guitar virtuoso Ottmar Liebert plays the Strater Theater on Saturday night. Tickets are expected to sell out, so don't say we didn't warn you.

Rock & roll was once, twice and thrice scorned a bastard by intellectuals. It was conceived in a drunken hookup between country and the blues back in the 1950s, a mixed-race mutt fueled by sex and drugs and played by a generation of rebellious punks too young to have fought in World War II. But as it aged, poets emerged ... folks like Leonard Cohen, John Lennon, Paul Simon, Townes Van Zandt and a kid from Minnesota’s iron range by the name of Zimmerman.

Last Thursday, the Pride of Hibbing, known professionally as Bob Dylan, received the Nobel Prize in Literature. He became the first rock & roller to receive the honor. The Swedish Academy commended him for “for having created new poetic expressions within the great American song tradition.” He gave voice to a generation during the political upheaval of the ’60s, the cynical ’70s and the self-absorbed Reagan years of the ’80s. Even today, Dylan still tours, records, educates and entertains. Seventy years after its birth, rock & roll can finally take its seat alongside the literature that has inspired us for centuries.

The Rock & Roll Hall of Fame announced its 2017 nominees earlier this week, and it’s tough to whittle it down to five picks: Bad Brains, Chaka Khan, Chic, Depeche Mode, Electric Light Orchestra, J. Geils Band, Jane’s Addiction, Janet Jackson, Joan Baez, Joe Tex, Journey, Kraftwerk, MC5, Pearl Jam, Steppen-wolf, The Cars, the Zombies, Tupac Shakur and Yes. No doubt most of these bands will eventually be inducted. My first ballot? Bad Brains is perhaps the most influential of the D.C. punk scene, infusing reggae, funk and metal into their music as well. They’re a no-brainer. Pearl Jam is arguably the most important rock band of the past 25 years, so they’re an easy choice. My three other picks were tougher. Joan Baez was the queen of the Greenwich Village folk scene of the 1960s. The Cars, along with Blondie and the Talking Heads, were among the first to usher in new wave. It’s hard to understand why it’s taken so long for them to be considered. And Yes were kings of the prog rock scene before reinventing themselves as hard pop rockers in the ’80s. So with apologies to Journey, Jane’s Addiction, J. Geils and others, I’m sticking with Bad Brains, Pearl Jam, Joan Baez, The Cars and Yes. Fans get a vote! Visit vote.rockhall.com to cast your ballot. You can vote daily through Dec. 5.

The Henry Strater Theatre welcomes Ottmar Liebert & Luna Negra 7:30 p.m. Saturday night in what will surely be a sold-out show. Liebert is a German guitarist with serious flamenco and classical chops, garnering six Grammy nominations to date during his 25-record, 25-year career. His latest album, “Waiting + Swan,” celebrates the music of Bob Marley & the Wailers. Now based out of Santa Fe, Liebert considers Marley the soundtrack of his youth. “I discovered an interesting connection between flamenco and reggae and recorded an album of songs that combine the Flamenco rhythm called tangos, which I believe actually hails from the Caribbean and is Caribbean rather than Arabic in ori- gin,” Liebert explained in his press kit. “Tangos have a lilt and the same avoidance of beat one that reggae and salsa have, and it sounds very different from all other flamenco forms. Presumably all three – tangos, reggae and salsa – have roots in Africa.”

Hasan Minhaj, a talented comedian widely known for his role on “The Daily Show,” takes the stage of the Community Con- cert Hall at 7:30 p.m. Saturday. Minhaj brings his one-man show, “Homecoming King,” which is based on true events from his first generation East Indian-American life. Topics include his arrival in the U.S., meeting his sister, interracial love, racism, bullying and the American Dream. NPR calls it “a roller-coaster ride.”

Critically hailed songwriter Ben de la Cour brings his Colorado tour to The Balcony on Tuesday evening. After growing up in Brooklyn, he escaped Gotham to become an amateur boxer, bar- tender, agricultural worker and, ultimately, singer/songwriter. One writer noted, “Ben de la Cour bleeds the songs he sings.” An- other mused that he has the “songwriting acumen of a young Nick Cave and the lyrical wisdom of a vitriolic Leonard Cohen.” Weaned on Townes Van Zandt and Warren Zevon, his two albums chronicle his sparse arrangements and emotional lyrics.

The Balcony celebrates its seventh anniversary Saturday with, fittingly, a matinee performance by the Lawn Chair Kings from 3-7 p.m.

The Durango Choral Soci- ety kicks off its season at 7 p.m. Friday at St. Mark’s Episcopal Church with “He & She,” featuring the Durango Women’s Choir and the FLC Men’s Choir. “This concert offers the widest variety of music of the year,” said Linda Mack Berven, conductor of the Women’s Choir. “The choirs will sing music from Bach, Bruckner and Mozart to Hindemith, Rodgers and Hammerstein, Moses Hogan and Dan Forest, and will even sing music from the current Broadway blockbuster, ‘Hamilton.’”

The Met: Live in HD continues at 10:55 Saturday morning in FLC’s Vallecito Room. This time around, they’ll screen Mozart’s “Don Giovanni.” With Giovanni, aided by his ingenious librettist, Lorenzo Da Ponte, Mozart approached his operatic retelling of the Don Juan myth from a point of view that is neither tragic nor entirely comic, but rather lighthearted, urbane and ironic. It follows the title character and his earthy comic sidekick Leporello through a series of encounters that begins with a fatal duel, moves back and forth between the humorous and the sentimental, and ends with the protagonist being dragged down to hell. All totaled, the screening runs nearly three-and-a-half hours.

Elsewhere: the Black Velvet Duo plays the Diamond Belle Saloon at 5:30 p.m. Friday; DJ Noonz spins at Moe’s from 8 ‘til close Friday; and DJ Kaztro is back at Moe’s Saturday night.

Then he went off sniffing drainpipes and reciting the alphabet? Email me at chrisa@gobrainstorm.net.