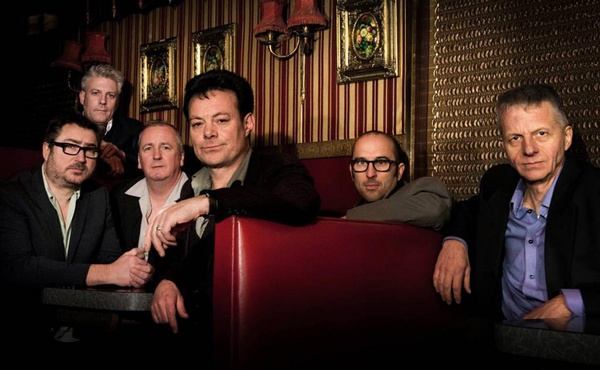 Come weeks there’s just so much to write about and so little space. This is one of those weeks, so let’s waste no time. In what’s surely the most intriguing and can’t-miss spectacle of the year at the Community Concert Hall, the James Hunter Six brings contemporary soul with vintage flare to town at 7:30 p.m. Tuesday. Led by British soul singer James Hunter, whose smoky voice has been compared to his influences Sam Cooke, Georgie Fame and Jackie Wilson, the group is the latest addition to the Daptone Records label. Hunter has six records under his belt, including the last two with the sextet. Last year’s “Hold On!” cracked my Top Shelf Top 10 albums of 2016 for its infectious grooves and horn-driven punch.

The latest KDUR Cover Night celebrates the music of Aretha Franklin at 8:30 p.m. Saturday at the ACT. Among the local artists honoring the Queen of Soul are Farmington Hill, Lawn Chair Kings, the Crags, the Outskirts, Bob’s Yr Uncle, Dirty Faces and many others. Listeners chose Aretha as the latest guest of honor in an online poll.

Get all gussied up in your best Roaring Twenties duds at 3 p.m. Sunday at the Community Concert Hall for the San Juan Symphony presentation of a program based on Gershwin and the infamous, decadent decade nearly 100 years ago. Featuring award-winning pianist Roberto Plano, the symphony explores the upbeat and lively personality of America’s most iconic composer with crowd favorites like “Rhapsody in Blue,” “Summer- time” and “It Ain’t Necessarily So.”

Up T-Ride way, the Sheridan Opera House hosts the 18th annual Telluride Comedy Festival tonight through Sunday. The big draw is the banjo-playing star of “The Hangover,” Ed Helm, who happens to be a part-time Telluride resident. Also on the bill are Brian Huskey (of “Veep” and “Bob’s Burgers” fame), Jason Mantzoukas (“The League,” “Brooklyn 99”), Nick Kroll (“Kroll Show,” “Portlandia”) and Seth Morris (“I Love You Man,” “Veep”), plus a host of Telluride newcomers. Sheridanopera house.com is your source for schedule and tickets.

fundraiser from 5:30-10 p.m. Wednesday to benefit Durango’s emergency responders through the 100 Club. The 100 Club’s mission is to provide financial assistance to families of law enforcement and firefighters who are seriously injured or killed in the line of duty, and to provide resources to enhance their safety and wellness. On Feb. 22, 2008, Durango Fire & Rescue Authority responded to the downtown fire in the 700 block of Main Avenue that destroyed three businesses, including Seasons, and impacted many more. Seasons reopened in 2009 and one year later, hosted its first Burning Down the House event. This year, Seasons welcomes back award-winning executive chef Dennis Morrisroe who, with sous chef Clark Peterson, will keep with the fire theme by creating a special dinner menu featuring items “smoky” and “spicy hot.” Reservations are required.

With a nod to the James Hunter Six, this week’s Top Shelf list features 10 contemporary R&B/soul albums that your record collection begs for:

1. Charles Bradley, “Changes,” 2016. Bradley invokes the spirit of James Brown in his cover of Black Sabbath’s 1972 hit, which is the outstanding and unlikely title track to this record.

2. Leon Bridges, “Coming Home,” 2015. Bridges was working as a dishwasher and performing at open mic nights in Austin when he was discovered by a Columbia Records talent scout.

4. Galactic, “Into the Deep,” 2015. The funkiest New Orleans band this side of the Meters recruited a host of local and national talent for its latest album.

6. Sharon Jones & the Dap-Kings, “Give the People What They Want,” 2014. It’s a shame that cancer claimed Jones last year, but her bravery toward the end defined her as much as her music.

7. Lake Street Dive, “Side Pony,” 2016. Their sixth record is chock full of disco hooks as these music conservatory students have graduated to hipster status.

8. Lettuce, “Crush,” 2015. These NYC funksters have been plying their craft since 1982 and their latest full-length album strays through R&B, jazz, EDM and hip hop territory. Anyone who caught them at Telluride Jazz a few years ago knows the power of their live show.

9. Eli “Paperboy” Reed, “My Way Home,” 2016. Guitar-driven R&B from the Massachusetts native who immersed himself in juke joint culture in 2002 when he moved to Clarksdale, Miss.

Blue-eyed soul from Birmingham, Ala., and cut in the legendary Fame Studios in Muscle Shoals.

Wish I could go back and change these years? Email me at chrisa@gobrainstorm.net.