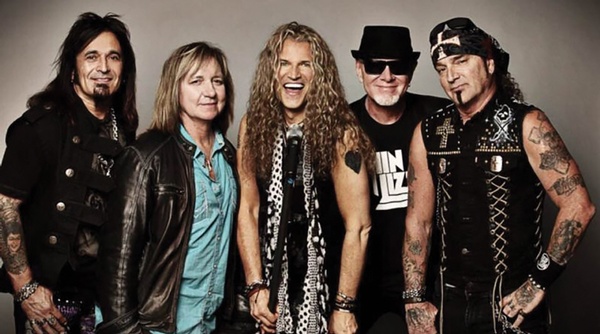 The '80s make a come back Saturday as Great White rocks the Sky Ute Casino at 8 p.m. Slaughter opens.

The 24th annual Four Corners Folk Festival takes place Friday through Sunday on Reservoir Hill in Pagosa Springs. This year’s lineup is as diverse as ever, with an equal mix of longtime veterans and relative newcomers. This comes as no surprise: ever since the inaugural FCFF in 1996, promoters Crista Munro and Dan Appenzeller have balanced tried-and-true favorites with newer acts meant to challenge their audience.

Born William Apostol in Lansing, Mich., in 1992, he’s quickly become a challenger for the throne of best bluegrass guitarist formerly held by Tony Rice and Clarence White (although Bryan Sutton arguably holds that crown). The 26-year-old, performing under the “Billy Strings” stage name, is certainly woke. Tunes like “Dealing Despair,” “Turmoil and Tinfoil” and the brand-new “Taking Water” delve into the current state of American politics. I caught him a couple of summers ago at the FirstGrass Wednesday show prior to Telluride Bluegrass. It was an immediate WTF moment, as I stood next to the Mountain Village stage alongside Liver Down the River’s Patrick Storen. Both of our mouths were agape, with our occasional full-on smiles and high-fives punctuating our shared excitement. Billy Strings is the truth. He alone is worth the price of admission.

Then there’s the Earls of Leicester, a bluegrass supergroup led by dobro player Jerry Douglas and fronted by singer/guitarist Shawn Camp.

They’ll wrap up the whole fester at 7:30 p.m. Sunday. Their name alone shows reverence to Earl Scruggs and Lester Flatt (Leicester, the English city, is pronounced “Lester”), and their music is rooted in the extensive Flatt & Scruggs catalog. Formed in 2013, their current lineup features banjo player Charlie Cushman, fiddler Johnny Warren and bassist Daniel Kimbro. They’ve released a pair of studio records and a live collection in the six years since and have become festival darlings. Douglas is no stranger to Reservoir Hill, having played a couple of past FCFFs, albeit a decade or more ago. Camp blew away the crowd at Durango Bluegrass Meltdown a few years back.

While Billy Strings & the Earls of Leicester represent relative newcomers to the bluegrass and Reservoir Hill worlds, there are also longtime favorites on the bill. Perhaps no artist this side of Eddie from Ohio has graced the Reservoir Hill stage more than Darrell Scott (5:30 p.m. Sunday), a venerable singer/songwriter and multi-instrumentalist who has backed the likes of Robert Plant, Guy Clark and John Cowan through his career while simultaneously kicking out a strong catalog of solo records and duo albums with Tim O’Brien.

Other instantly recognizable names for the Pagosa crowd include Rob Ickes & Trey Hensley (2:30 p.m. Sunday), Amy Helm (6:30 p.m. Saturday) and the East Pointers (4 p.m. Sunday) give the people more of what they want. Other highlights include Molly Tuttle (5 p.m. Saturday), the reigning IBMA Guitarist of the Year and the first woman to win the award. She recently wowed the Telluride crowd with her solo performance and  as a member of the First Ladies of Bluegrass.

This year’s festival will no doubt be melancholy for some.

Munro & Appenzeller are turning the reins over to KSUT this October, as they now live in Oregon, where Munro has become executive director of the Sisters Folk Festival. It’s tough to manage a festival from a thousand miles away, which they’ve done for a number of years. Many of the folks who help put on the event have been there from the start. While we’re excited about the opportunity we’ve been given at KSUT, we realize that Munro & Appenzeller are irreplaceable. We can only hope to continue their legacy of offering family-friendly camping festivals that appeal to acoustic music audiences in the Four Corners and beyond. (Full disclosure: I am also the development director and an on-air personality at KSUT.)

Things will be a bit louder in Ignacio on Saturday night than they will in Pagosa, as the Sky Ute Casino presents Great White and Slaughter at 8 p.m. Both are veterans of the ’80s heavy metal scene, with Great White, in particular, holding a soft spot in my heart. Their tunes like “Once Bitten, Twice Shy,” “Rock Me,” “Save Your Love” and “Call It Rock & Roll” were radio hits and MTV favorites. Unlike many of their peers, Great White’s music was more based in blues and hard rock than in glam-metal. Three original members – guitarist Mark Kendall, keyboard player Michael Lardie and drummer Audie Desbrow – remain from the classic lineup. Like Great White, Slaughter also charted some huge hits back in the day, namely “Fly to the Angels” and “Up All Night.”

The tale of Great White is a tragic one. Just as they were poised to make a leap into superstardom, that little thing called grunge hit in the early ’90s. Listener tastes switched from hard rock and heavy metal to the plaid-shirt wearing crowd that moshed to Nirvana, Pearl Jam, Soundgarden and Alice in Chains. All of a sudden, big arena tours dried up for ’80s rockers. By the 2000s, most were relegated to the state fair circuit and tiny venues. Great White had broken up, reformed under lead singer Jack Russell, and began touring nightclubs.

One was The Station, a small bar in Rhode Island. On Feb. 20, 2003, the band’s pyrotechnics ignited the foam soundproofing material in the ceiling and the venue erupted in flames. A hundred people died, including Great White guitarist Ty Longley. Sadly, many think of this tragedy rather than their music. The band and many of their ’80s contemporaries toured for several years raising funds for victims.

Warsaw Poland Bros. return to town for a 10 p.m. show tonight (Thurs., Aug. 29) at the Animas City Theatre. A part of the third resurgence of ska music, Warsaw has been playing Durango for decades, including legendary shows at the old, tiny Ska Brewery and The Summit. Busters Ghost and Your Bones are also be on the bill.

Wanna be a DJ? KDUR holds its DJ application meeting at 5:30 p.m. Wednesday in 125 Noble Hall. If you’re interested in hosting a music show on KDUR, showing up and completing a DJ application is mandatory. This is DJing in its most traditional sense: spinning vinyl and CDs to Durango’s most discerning listeners.

You’ve yet to have your finest hour? Email me at chrisa@gobrainstorm.net