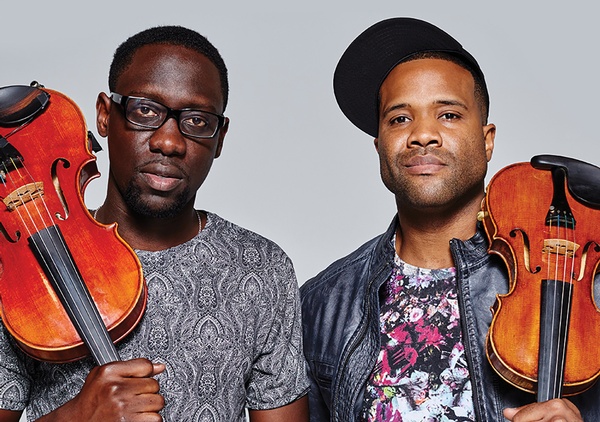 Let’s travel back in time and place to Everett Junior High School in Wheat Ridge, circa 1982. These were the days when you made textbook covers out of paper grocery bags and decorated them with the logos of your favorite bands, usually during a class that left you drooling down your face when you fell asleep in it. Everett’s students were generally lumped into three categories: freaks, hicks and jocks. You could argue the existence of a fourth unnamed group, the nerds, but nobody claimed membership in this pimple-faced crew of bookish wimps.

The freaks always had the best textbook cover art, claiming their allegiance to Van Halen and AC/DC (let’s face it – easy band logos to draw) as well as Black Sabbath and Judas Priest (much more difficult to etch). There were a few, mostly girls, who drew REO Speedwagon logos. The true outcasts adorned their covers with Rush’s Starman logo. It was simple, yet thought-provoking: a circle, a five-point star, and a naked man facing the star with arms outstretched. Songs like “Tom Sawyer” and “Subdivisions” ruled the airwaves. As 12- and 13-year- olds, the irony of Neil Peart’s lyrics were lost on us.

Peart died last Tuesday at the age of 67 after a battle with brain cancer that
lasted more than three years. The band didn’t make the announcement until Friday. The news wrecked me like few others. Lyrically and rhythmically, Peart was a giant. He joined Rush shortly after the release of their first album when original drummer John Rutsey quit the group due to diabetes and his distaste for touring. The other two members held auditions, with the gangly and geeky Peart easily emerging as the logical choice. Two weeks later, they were on tour.

In the annals of rock history, Peart challenges for the title of greatest drummer, alongside the likes of rock pioneers John Bonham, Keith Moon and Ginger Baker and jazz cats like Gene Krupa and Hal Blaine. As a lyricist, his words dwarfed fellow prog-rockers in Genesis and Yes and all of the heavy metal songwriters. Rush tunes about partying and chasing girls were nonexistent. Even odes to fast cars (think “Red Barchetta”) were elegant and thought-provoking. Rush’s lyrics appealed to gamers and sci-fi freaks and readers of renegade philosophers like Ayn Rand.

As a child of the MTV age, the first Rush album I owned was a cassette of 1984’s “Grace Under Pressure” – a perfect record for the late Cold War and one in which New Wave influenced the band’s sound as much as bluesy metal did a decade earlier. I saw the Power Windows Tour a year later at McNichols Arena in Denver. At the time, it was the best concert I’d ever seen. It still ranks up there.

Thank you, Neil, for giving pimple-faced kids like me a sense of belonging back in the early ’80s.

Black Violin returns to the Community Concert Hall at 7:30 p.m. Saturday. A year-and-a-half ago, they took the venue by storm with their unlikely pairing of classical and R&B. The duo of Wil Be Baptiste (viola) and Kev Marcus Sylvester (violin) are classically trained but add elements of hip-hop, R&B, rock, bluegrass and chamber music to forge a sound that crosses centuries as well as cultural boundaries. Joined by ace turntablist DJ SPS and percussion, they’ve played everything from packed SXSW venues to Barack Obama’s inaugural ball. Yes, the dance floor will be open – and packed with grooving throngs.

Also back at the Concert Hall by popular demand is Choir of Man, which takes the stage at 7:30 p.m. Tuesday. These nine ordinary guys perform everything from singalong classics to classic rock. “Envision the greatest pub gig ever seen and multiply it by 10,” noted one critic. Another raved, “A feast for the senses, Choir of Man will have you dancing down the aisles.”

Ever think about introducing the kids to Prokofiev? The San Juan Symphony gives you several chances to do so this week with the family-friendly presentation of Peter & the Wolf. Performances are scheduled for 5 p.m. Saturday at the Henderson Fine Arts Center in Farmington; 2 p.m. Sunday at the Bayfield Performing Arts Center; and 5 p.m. Sunday at the Community Concert Hall. Get there an hour early for a free instrument “petting zoo” hosted by the SJS and Durango Joe’s. The kids will get their chance to test all the symphonic instruments while you get wired on free coffee. The best part? It’s free for kids 14 and under.

The Sheridan Opera House in Telluride gets funky at 9 p.m. tonight with the New Mastersounds. For more than 20 years, the group has been at the top of an elite selection of acts that bring the true soul out of funk. Through the years, they’ve collaborated with the likes of Corinne Bailey Rae, Page McConnell of Phish, Grace Potter, Karl Denson, Melvin Sparks, Maceo Parker, George Porter Jr. of the Meters, and countless others. DownTown Abby & the Echoes open.

The Wild Edge Brewing Collective hosts a Prohibition 100 party from 5-10 p.m. Saturday at their brewery located at 111 N. Market St. in Cortez. The good news is that the benefit for United Way of Southwest Colorado is sold out. The bad news is that those of us who didn’t get tickets can’t attend.

The Met: Live in HD continues with Alban Berg’s “Wozzeck” at 10:55 a.m. Saturday in the Vallecito Room of FLC’s Student Union. Run time is approximately an hour and 42 minutes. This masterpiece is set in an apocalyptic pre-World War I environment.

Ever wanted to play well with others (musically speaking)? Sue Coulter hosts a Wernick Method Bluegrass Jam Class from Feb. 13 - March 19. Contact her at 247-1264 if you’re interested.

Elsewhere: Rockin’ Randy Crumbaugh returns to the Ska Brewing World Headquarters at 5 p.m. tonight (Thurs., Jan. 16); Kirk James plays solo blues to the Seven Rivers Restaurant at the Sky Ute Casino at 6 p.m. Saturday; the Black Velvet trio returns to the Derailed Pour House at 7 p.m. Saturday; and Farmington Hill brings the twang to Fenceline Ciders in Mancos from 7-9 p.m. Saturday. The Nord encourages attendees to wear plaid, lest they be labeled outcasts.

His mind is not for rent? Email me at chrisa@gobrainstorm.net.