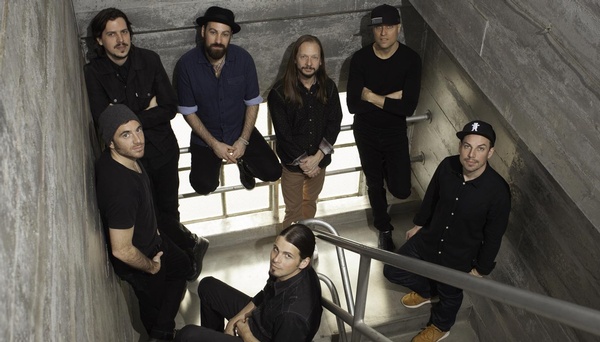 The Motet graduates to the big stage of the FLC Community Concert Hall at 7:30 p.m. this Friday.

The more I heard and read, the more my mind drifted to long-forgotten songs. King Missile, an art rock band from New York City that made an impression on college radio back in the day scored a hit with “Jesus Was Way Cool” ... a catchy ditty that could be revised into a Trumpian parody. Among the epic lyrics was “He could have turned wheat into marijuana” and “He could’ve baked the most delicious cake in the world.”

With those lyrics stuck in my head, I rummaged through my collection of old cassettes, vinyl, concert posters and scrapbooks and came across a concert I booked and produced in 2005 that tied this whole week’s Durango entertainment calendar together: the Motet, performing Michael Jackson’s “Thriller” at the old Abbey Theatre (now known as the Animas City Theatre) four days before Halloween.

It’s hard to believe the Motet has been crisscrossing Colorado for two decades. From funky mountain festivals like the Silverton Jubilee to dozens of sold-out shows at the ACT, we mountainfolk have been grooving to their mix of funk, disco, Afrobeat and jazz from the beginning. On this tour, the Denver-based band has graduated to the big stage of the Community Concert Hall, which they’ll play at 7:30 p.m. Friday. Led by drummer Dave Watts, they’ve morphed from jam band to drum circle to avant-garde jazz combo to full-on funksters who embrace disco, electronic jazz and vintage ‘70s R&B sounds. Their last decade has produced three diverse albums. 2009’s “Dig Deep,” 2014’s “The Motet” and 2016’s “Totem” have become personal favorites of mine, for entirely different reasons. “Dig Deep” captured a sushi-bar kind of cool ... music to chill to. Five years later on their eponymous record, Watts and company fully embraced the ’70s sounds of Stax Records and Studio 54. “Totem” brought the whole thing together. The title is obviously an anagram of the band’s name. But conceptually, the album weaves all of the band’s influences into a unified sound.

The Motet’s lineup, like its sound, is constantly evolving. In addition to Watts, the current version features Joey Porter (key-boards), Garret Sayers (bass), Ryan Jalbert (guitar), Gabriel Mervine (trumpet), Lyle Divinsky (vocals) and Drew Sayers (saxophone). Sayers also doubles as DJ Naysayers, who will kick off the evening’s dance party with a selection of roots and dub reggae. Yes, the dance floor will be open. If you plan on skiing Telluride this weekend, you can also catch the Motet at Telluride’s Club Red at 8 p.m. Saturday.

Remember the ’80s, when pop music ruled the world? Charles Leslie at the Community Concert Hall sure does, although he’ll be the first to admit he was a bit of a headbanger in his salad days. Still, inside every rocker is a kid who had his eyes glued to Michael Jackson videos during MTV’s reign over our teen-age souls. I imagine Leslie drooled at the opportunity to book Who’s Bad: The Ultimate Michael Jackson Tribute Band. Who’s Bad comes to the Concert Hall at 7:30 p.m. Tuesday. The band is the longest-running Michael Jackson tribute, and the only one to pre-date Jackson’s passing. Its cast has more than 100 years of combined professional experience that includes Broadway productions like “Phantom of the Opera.” Frontman James Times handles Jackson’s vocals and dance moves with reverence.

Folk-pop singer Brett Dennen plays Club Red at the Telluride Conference Center in Mountain Village at 7:30 p.m. tonight (Thur., Jan. 11). A veteran of multiple Telluride Bluegrass Festivals, Dennen even played Durango early in his career when he opened for Michael Franti & Spearhead. A self-taught guitarist, Dennen started writing his own songs as a kid and dropped his self-titled debut in 2004 when he was 23. Recent albums like 2013’s “Smoke and Mirrors” and 2016’s “Por Favor” have become favorites on AAA radio and cemented his reputation as a songwriter.

If you missed out on funky electronic grooves of The Floozies at the ACT earlier this week, you can catch them at the Sheridan Opera House in Telluride with a pair of 8 p.m. shows slated for tonight (Thur., Jan. 11) and Friday.

This week’s Top Shelf list re-calls my 10 favorite Michael Jackson songs. My apologies for no big revelations here:
1. “I Want You Back,” 1969. This song introduced the Jackson 5 and 10-year-old Michael to the world when it shot to No. 1 on the R&B and pop charts in early 1970.

2. “ABC,” 1970. The Jackson 5’s follow-up single remains a staple in sports arenas worldwide, particularly during basketball games. This one is an anthem.

4. “Billie Jean,” 1982 – I remember blaring this on Jon Reiling’s boom box at Wheat Ridge High School girls’ soccer games. We had teen-age crushes on a couple of the players and attempted to woo them with Michael.

5. “Beat It,” 1983 – Mall rat rockers like me developed a new appreciation of Michael Jackson simply because he enlisted Eddie Van Halen for the guitar solo. Eddie was on top of the world at the time, and his fretboard-tapping solo translated into the pop/R&B world with ease.

6. “Wanna Be Startin’ Somethin,’” 1983. If all that producer Quincy Jones ever accomplished was the horn arrangement on “Startin’ Somethin,’” he’d still deserve his 2013 induction into the Rock & Roll Hall of Fame.
7. “Thriller,” 1983. I can’t lie. I dug the much-hyped MTV video, directed by John Landis with the spooky spoken-word part from Vincent Price.

8. “Bad,” 1987. Not that Michael needed any more affirmation of his mega-platinum success, but whenever Weird Al Yankovic covers you, it means you’ve become a cultural phenomenon.

9. “Man in the Mirror,” 1988. Michael’s first real foray into political lyrics offered a simple solution to conflicts, be they the global, national or interpersonal level.

10. “Black or White,” 1991. Another trek into political territory and another groovy video produced by Landis.

He could’ve scored more goals than Wayne Gretzky? Email me at chrisa@gobrainstorm.net.