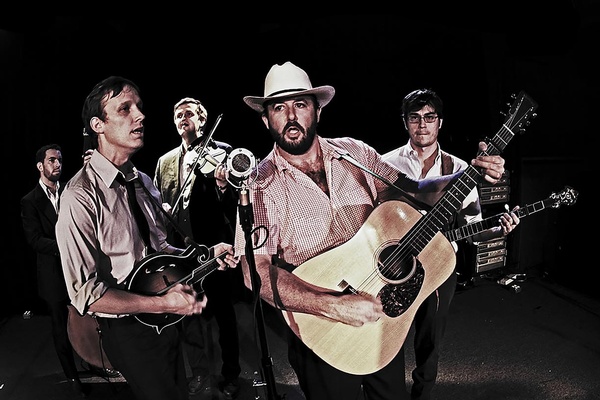 If you’re afraid of banjos, stay home this weekend. Schedule a couch session with your shrink. Or run to the hills. The 23rd annual Durango Bluegrass Meltdown takes over most downtown stages for three days of high and lonesome tunes. Town Mountain, Danny Barnes, David Parmley & Cardinal Tradition, the Kathy Kallick Band and the Freight Hoppers headline one of the strongest Meltdown bills ever.

On Monday night, I spoke with Town Mountain banjo player Jesse Langlais about his band’s fondness for the Meltdown, future plans and letting 10-year-old kids serve as pit masters at family barbecues.

“My dad told me you’ve got to start somewhere,” Jesse joked when I messaged him that I’d need to reschedule our Sunday interview because my boy Otto flew solo on the Traeger smoker for our Easter dinner. Jesse was also shelved by an impromptu Easter dinner invitation in Asheville, N.C., that turned into a nine-hour soire?e. (For the record, Otto smoked the turkey to near perfection, with limited supervision from Mom & Dad.)

He laughed harder when I scolded my Jesse, a 3-year-old German short-hair, for barking during our interview. Such is the norm for a conversation between a Town Mountain member and a longtime Townie. We’re not just kindred spirits. We’re kin.

“It’s a pretty bad ass scene,” Langlais said of Durango in general and the Meltdown in particular. Town Mountain makes its third appearance at the festival this year. “Ever since we first started going to Durango, we felt like we had a connection to the area. We certainly have a lot of buddies who live there.”

Langlais also said that unlike outdoor/summer festivals, Melt-down’s intimate rooms and unique balance of national, regional and local bands make it special. “It’s nice to be able to go to that environment in the middle of the winter (or spring, in Melt-down’s case). Meltdown has that.”

Sets at the Henry Strater Theatre are extra special to the band. “Are there any cooler venues to throw a festival at than the Strater?” he asked. “There just seems to be a lot of history in that town. It feels like the Wild West. That attitude transfers through the whole scene and the festival. The Durango crew seems to be so much a part of what the Meltdown is. It’s always been run by locals.

Langlais also looks forward to seeing some of the other head-liners. “Two of my favorite banjo players are playing there – Danny Barnes and Jeff Scroggins,” he said. “I’m super excited to see those guys play ... I love to hear Jeff play some Don Reno. He just crushes some Don Reno. And I can only imagine Danny’s trio is going to be pretty interesting.”

After a busy couple years, with a heavy recording touring schedule, Town Mountain isn’t hitting the brakes anytime soon. “We have studio time booked,” Langlais said. “This whole winter, we’ve been rehearsing a new bass player, and in turn we’ve been rehearsing a bunch of new material.” He said fans can expect their next album to be similar to “Southern Crescent,” with the same feel rhythmically and a little boogie-woogie. You can also expect drums as well as fiddle player, Jack Devereux, on the pedal steel.

David Smith returns from North Dakota this weekend for the Meltdown. The longtime KDUR DJ and Meltdown board member provided this week’s Top Shelf list of his favorite Town Mountain originals.

1. “Wildbird,” from “Southern Crescent,” 2016. Poetry at the steady pace of life. When there’s a story to tell, Town Mountain

presents lyrics and melody so honestly that decades of travel, lost love, longing and hope can be wrapped up in 41⁄2 minutes.

2. “Midnight Road,” from “Steady Operator,” 2011. The influence of Townes Van Zandt is so palpable that whiskey and Texas dust grace the stereo speakers. While some may focus on Robert Greer’s swaggering vocals or the blues bend of Jesse Langlais’ banjo, Phil Barker’s poetic lyrics cannot be denied as a key piece.

3. “Diggin’ on the Mountainside,” “Steady Operator.” While the couch liberal might raise a soft-handed fist to “Ruination Line,” this one’s just for the working class. Durango knows this story all too well.

4. “Ruination Line,” “Heroes & Heretics,” 2008. There’s a rebellious undertone with this band. Outlaw country, Southern rock and folk have always tugged at the political fringe. This one lays it all on the table.

6. “Lawdog,” “Leave the Bottle.” Hold on, here we go. Laaaaaawdooooooooooooooog!

7. “Sparkle City,” “Steady Operator.” “Well they tell me Sparkle City she’s a ramblin’ man’s dream ...” Who’s ready to keep on runnin’ through the night? I am.

8. “Comin’ Back to You,” “Southern Crescent.” Gotta give some love for the Durango shout-out. The theme of “bands hitting the road” can be cliche?. Luckily, “Comin’ Back to You” pulls together the modern originality with classic honky-tonk, making for an unforgettable romp across the country.

9. “Texas/New Mexico Line,” “Heroes & Heretics.” This one opens the bold skies of the Southwest and dodges through the mesas of the high desert. If you haven’t lived a similar road trip, it’s time to turn the key

10. “Whiskey With Tears,” “Original Bluegrass and Roots Country,” 2005. Town Mountain is deservingly a Top Shelf band, but there was a time when they were the dive bar kings of the bluegrass scene. This smoky air and sticky floor waltz made me a lifelong fan.

Counting the hours while I sit by myself? Email me at chrisa@gobrainstorm.net.