Cootiegrass 2021
Highlights – and lowlights - of a return to Town Park 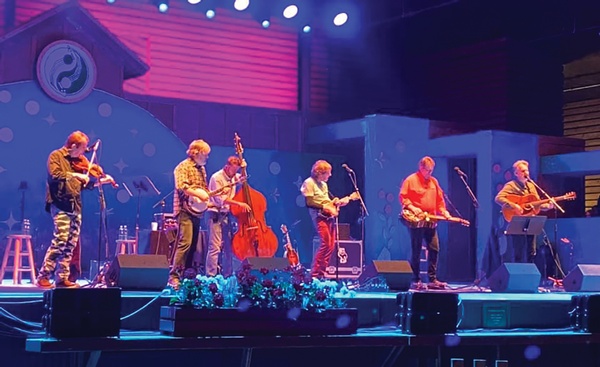 All the players were there for this year's super jam at Telluride Bluegrass.

The 48th annual Telluride Bluegrass Festival came and went last weekend in Town Park with inspired performances and a laid-back vibe. Isolated into 10-person corrals per town mandate and limited to just 25 percent capacity (2,500 tickets sold, 3,000 capacity maximum, which included artists, staff, volunteers and vendors), it was well received by those of us lucky enough to get a ticket. If the lockdown of 2020 meant no festival, then the reduced-capacity event of 2021 was acceptable.

Yes, the $100-per-day ticket price was a bit steep. And, with just four bands per day, it was shorter than usual. I found that the limited amount of music made me show up early each day in order to savor every note. In fact, I think I just missed two bands all weekend, one of which I managed to hear from the comfortable confines of Dave & Theresa Harrison’s camp, where 12-oz. cans of beers didn’t cost $7 a pop.

To think this was the first post-COVID event of Telluride is naïve. COVID certainly had a front row seat. Contrary to popular belief, it hasn’t magically disappeared. Our tarp was 90 percent fully vaccinated (and the 10th has received one of his shots). Two people from Corral C13 had recovered from COVID, one of whom got quite sick in November. But the vaccine isn’t perfect. One of my tarp mates noticed a headache and cough in between festivals and decided to get tested. On Friday night, she got the surprising and bad news that she was a breakthrough case in Colorado – just the fifth person to be confirmed with a new case of COVID despite being vaccinated.

This will be a litmus test of sorts, as I was in close proximity to her prior to Friday night’s news. I’ve been vaccinated. We were mostly outdoors. There were a couple of quick hugs early in the festival, but for the most part, we respected our personal space. Just to be safe, I’m going to get tested this week and again the next. I’m curious about the science. Did my double dose of Pfizer ward off the evil as advertised?

The moral of the story is, you can practice all the hand-washing, masking and social distancing you want … but if the person next to you is sick, then you might catch it. And don’t assume the person next to you has been vaccinated. In a community like Durango with a little more than 50 percent of the folks fully vaccinated, it’s still a coin toss as to whether or not they have.

Fortunately, my friend hasn’t gotten sick. It never really progressed beyond a cough and chest congestion. They’ve sold many of us on the hope that if you catch COVID, your symptoms will be less severe if you’re vaccinated.

Our annual Father’s Day brunch on the tarp was a perfect example of how cooties hop around like a bunny. One couple at brunch was proud of the fact that they’re unvaccinated and are still travelling internationally. These folks didn’t seem like red-hatted mouthbreathers. Rather, they were your garden variety, organic-food-eating, take-a-morning-hike-to-the-top-of-Mount- Wilson type of Telluride locals. Young, fit, healthy and beautiful. Not surprisingly, they felt a little sick upon return from a Caribbean trip a few weeks ago, but never got tested. You connect the dots … The “I’ll be fine if I get it” sect completely ignores the health of friends, neighbors and 2,500 strangers at a festival. And I’ll be getting that swab up my nose a couple times just for shits and giggles the next two weeks.

But we pressed on, nonetheless. We washed our hands and used the sanitizer and tried not to hug so much. And the music was spectacular. Here are my weekend highlights:

• Yonder Mountain String Band’s Nightgrass show at Club Red on Thursday night. It was the first time I’ve seen new multi-instrumentalist Nick Piccininni, who replaced mandolin player Jacob Jolliff last summer. Jake never seemed to really fit in. He was too flashy of a picker and had the unenviable task of replacing the charismatic Jeff Austin. Nick, on the other hand, wears a contagious smile that rubs off on everyone in the room. It doesn’t hurt that he can play any instrument with strings and sing Jeff’s old songs with reverence. I haven’t seen this band have this much fun since 2005 or ’06.

• Emmylou Harris’ Sunday mainstage set. She’s grace personified and arguably the most important figure in country music the past 50 years. She walked onstage, picked up her Epiphone guitar and launched into “Roses in the Snow” and “Blue Kentucky Girl,” and you knew it was going to be one of those romantic strolls down memory lane. Along the way, there were nods to her former partner, Gram Parsons, with “Wheels” & “Ooh Las Vegas;” a couple more Bill Monroe dustups on “Scotland” and “Get Up John;” and a tear-jerking version of Billy Joe Shaver’s “Live Forever,” which she dedicated to Shaver, John Prine, Tony Rice, Jerry Jeff Walker and John Starling.

• Six Dollar String Band Saturday afternoon in the plaza at Mountain Village. Robin Davis, Stephen Sellers and Brendan Shafer are working as a trio this summer while Tony Holmquist spends some time in Virginia. But they still managed to whip a small but fervent batch of hippie girls and Texas tourists into a frenzy for two hours during intermittent rain and hail. Many a Montucky Cold Snack was sacrificed during this set.

• Mavis Staples, Sunday gospel set on the mainstage. I don’t know about you, but I sure needed her growl on “I’ll Take You There” and “The Weight” after 2020.

• Leftover Salmon, closing down the mainstage Saturday. Sam may be the King of Telluride, but Vince Herman is its Zen-like high priest.

• Richie & Rosie, Friday afternoon. With just 16 acts booked the second weekend (and 12 the first), the old-timey couple of Richie & Rosie seemed out of place, but they quickly reminded me why I love seeing them in venues large and small.

Up on the hill where they do the boogie? Email me at chris@ksut.org.