Cracking nuts, benefit for Mark and Goose on the loose 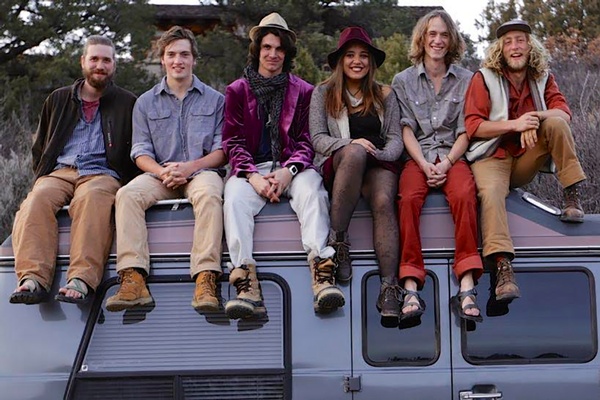 Live Down the River performs at a benefit concert for FLC music professor Mark Walters from 6-11 p.m. tonight at the Garage.

If you’ve read this one before, indulge me anyway. Back in the summer of 1991, I ventured into Telluride for the first time ever. I’d bought a Sunday ticket to the legendary inaugural (and only) Telluride Midsummer Music Festival. That day saw Widespread Panic, Taj Mahal, the David Grisman Quintet, Hot Tuna and the Allman Brothers Band. It was quite a trip, if you know what I mean.

I was a freshman orientation leader at the alma mater back in the day – the second of two summers in which I’d host a group of incoming freshmen in the dorms, give them campus tours, help them get signed up for classes and learn what to expect as a college student. We’d do this three times each summer, netting me a couple paychecks along the way to offset my meager part-time income from Sixth Street Liquors and the Durango Herald. It paid off in many ways – namely meeting my first wife and, thus, staying in Durango instead of heading up to Denver to live with my folks and find a journalism job. She and I started dating a few days after the last orientation.

But my mind wasn’t focused on true love that particular Saturday, when I dismissed my freshmen. It was on music. So I packed my ’76 Toyota Corolla wagon with a change of clothes, some food and a cooler filled with beer and booze. I kept a sleeping bag and pillow in the back of the Corolla in case I needed a place to crash on a fishing trip or if I’d had too much to drink.

I rolled into Telluride, parked it in the Rose’s Market lot and wandered toward Town Park. I was hoping to catch Los Lobos and Joe Cocker – the last two acts of the day – but couldn’t make a miracle happen. Instead, I sat by the river, drank beer and listened. There, I ran into Garian and Kat, two friends from Durango. They told me about a huge show that night at the Sheridan Opera House featuring Blues Traveler, Widespread Panic and Little Women. We tried every way possible to get into the sold-out event ... pulling the usual media strings (I’d interviewed both Jerry Joseph of Little Women and David Schools of Widespread Panic on the air and did backstage security at a recent Blues Traveler show in Durango) and even tried to break in through the loading dock. Alas, we listened through the venue’s windows.

Two folks with connections to that epic night return at 9 p.m. Saturday when the aforementioned JoJo Hermann & Jerry Joseph take the stage at the Sheridan Opera House with special guest Sherman Ewing. Joseph is a regular in these parts, starting in the late ’80s with Little Women and continuing into recent years with Jerry Joseph & the Jackmormons. He was also a member of the Widespread Panic splinter group, Stockholm Syndrome. Hermann joined Panic full-time as their keyboard player in 1992, replacing T Lavitz, who left after a brief period to rejoin his old band, the Dixie Dregs. Hermann is steeped in the New Orleans R&B piano sounds of Professor Longhair and Dr. John. Ewing, who has toured with Hermann several times in the past, is a versatile singer/songwriter whose writing ranges from jam band and  rock to Americana and alt-country.

The State Street Ballet of Santa Barbara brings the magical holiday ballet, Nutcracker, back to the Community Concert Hall this weekend with 7:30 p.m. evening performances (Friday and Saturday) and 2 p.m. matinees (Saturday and Sunday). More than 70 local dancers will join the professional troupe, as will the San Juan Symphony. Artistic director Rodney Gustafson holds true to the original classical ballet in this Tchaikovsky masterpiece, creating a traditional Nutcracker set in Victorian times. The ballet is based on the book The Nutcracker and the Mouse King by E.T.A. Hoffman.

Low ticket alert! Durango’s beloved Bar D Wranglers return to the Community Concert Hall at 7:30 p.m. Wednesday with their 2019 Christmas Jubilee. These four cowboy crooners spend all summer performing and serving up tasty beef and beans at the Bar D Chuckwagon north of town, then take a needed hiatus after Labor Day. Aside from a few out-of-town jubilees with other traditional Western and cowboy acts, it’s rare to see them live in the off-season. The exception, of course, is their annual holiday show. This Christmas Jubilee is a warm-hearted and fun-filled show that inspires the entire family to remember the reason for the season. A few seats remain in each section, but this will surely sell out.

The Garage hosts a benefit concert for FLC music professor Mark Walters from 6-11 p.m. tonight (Thurs., Dec. 12). This summer, Walters suffered a massive stroke. He and his wife, fellow FLC music professor Lisa Campi, have impacted thousands in our community through music performance and education. Campi is trying to raise money to send her husband to Craig Hospital in Denver for rehab where he can rebuild some of his basic skills. Performers include Liver Down the River and FLC music students and faculty. A silent auction will be held, and Ska Brewing is donating a keg, with proceeds benefiting the cause.

Finally, the goose is loose! Steamworks’ annual holiday beer, Spruce Goose, is now available in 12-oz. cans. This year, Steamworks partnered with the folks at Wild Tribute to create artwork for the new cans. It’s a fresh, new look but same amazing taste of the San Juans. This strong, Viking-style ale is brewed with spruce tips harvested in the San Juan National Forest near Molas Lake. The delicate new growth from the spruce trees blends with a complex malt bill to give this unique beer a candy-like flavor with a light, piney aroma. In conjunction with the mission of national parks-inspired apparel maker Wild Tribute, four percent of proceeds from Spruce Goose beer and T-shirt sales will benefit national parks. The beer can be found at Steamworks and Durango’s independent liquor stores. I’m stoked these are now in cans. It’s my favorite local seasonal beer, but the 22-oz. bomber was quite a commitment. Now, I can sip a 12-oz. barley pop at my own pace.

Looking for Caligula or looking for a god? Email me at chrisa@gobrainstorm.net.