Craft, Lydia Loveless and David's bluegrass picks
When not picking on his guitar, David Smith is picking out the best bluegrass of 2016 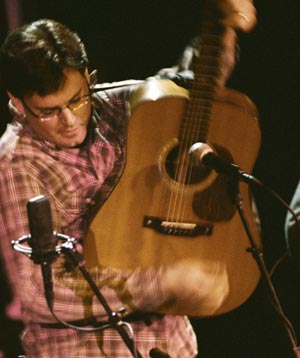 Tis the season for giving and grubbing. Seasons Rotisserie & Grill will once again celebrate its anniversary giving back to the community with a special night of fundraising on Tuesday, benefitting Housing Solutions for the Southwest. From 6-9 p.m., the community is invited to drop into Seasons for samples of the latest menu offerings as well as traditional fare and fine wines. No reservations required, but a minimum $40 per person donation is requested.

KDUR hosts the film “Who Is Lydia Loveless?” tonight (Thurs., Dec. 8) at 7:30 p.m. (doors at 7). Lydia Loveless is an alt-country songstress who lives hard and writes from the heart. Support community radio!

For the 10th year in a row, the Community Concert Hall welcomes back The Nutcracker performed by the State Street Ballet of Santa Barbara. This time, the San Juan Symphony will accompany them, as will local dancers. There will be two 2 p.m. matinees (Saturday & Sunday) and two 7:30 p.m. performances (Friday & Saturday).

Finally, The Wood Brothers play the Sheridan Opera House in Telluride on Sunday night, so if you’re heading up for skiing this weekend, consider staying for the show. Fewer than 50 tickets remained earlier this week, though.

1. Town Mountain, “Southern Crescent” – With every album, this band strengthens its original songwriting voice and melodic instrumentation. Many definitions are created for band bios, and for the sake of attempting to link genres and musical eras: Town Mountain is the country heart of Robert Greer, lone- some harmonies of Phil Barker and bluesy bends of banjo player Jesse Langlais. The band traveled down to the Bayou with old- time music great Dirk Powell, recording and producing. The result is as agreeable as an absinthe Sazerac on a cool-breeze night.

2. Travers Chandler, “Archaic” – I counted the theme of death in the first four songs but by then was too torn and affected to keep counting. As modern bands delve deeper into the progressive and perfectly produced and arranged bluegrass, Travers keeps it real. So real-deal traditional that it’s downright archaic. Perfect. 3. Chatham County Line, “Autumn” – How does Dave Wilson do it? Not only truly amazing songwriting from start to finish, but each album is packed with hits. Cuts like “You Are My Light” and “Siren Song” – are you kidding me? So good. And when you wrap the poet that is Wilson around the trio of Teer, Holt and Read- ling, you have a quartet that measures right up to Steve Earle with the Del McCoury Band.

4. The Del McCoury Band, “Del & Woody” – This is the great meeting of music minds: a late, great meets a living legend. The family of Woody Guthrie presented Del with a stack of Woody’s lyrics that were never put to music. Del and the boys created this one for the ages. Del’s personality and voice seem made for Woody’s heavy yet whimsical words.

5. Greensky Bluegrass, “Shouted, Written Down & Quoted” – Dobro player Anders Beck told me once that it was the songwriting of the band that drew him to the group. That’s as evident now as it was those years ago. When you listen to a couple hundred albums a year, the ones with emotion stick out. These guys wear their hearts on their sleeves and do it for their fans.

6. The Infamous Stringdusters, “Ladies & Gentlemen” – The gentle- men of the Stringdusters wrote songs in their mountain-town style and sent them to the talented ladies of modern- day folk and bluegrass. With ethereal

vocals added, the album becomes more than a “Bluegrass Album of the Year” ... it’s a recording for the Americana canon.

7. Jeff White, “Right Beside You” – This is just a goodtimey album. There are recognizable tunes that followers of blue- grass will enjoy in Jeff White’s laidback yet powerful style. Plus, he’s joined by a jaw-dropping all-star band (Cushman, Cleveland, Krauss, Camp, McCoury, Douglas, Gill, Bales, etc.)

8. Tyler Grant, “Earth & Wood” – I saw a Facebook post from Stringdusters’ banjo player Chris Pandolfi talking of Grant saying, “Long live the champ.” Yes indeed. Tyler is a legitimate flatpick guitar champion, but he’s also a stellar songwriter, band- leader and all around decent human being. Earth & Wood is a mix of all these assets.

9. Earls of Leicester, “Rattle & Roar” – Like the all-star band mentioned with White’s album, it’s impossible to leave a recording paying tribute to Flatt & Scruggs off this list. It also includes several of the best singers and pickers in bluegrass.

10. Lou Reid & Carolina, “Rollin’ On” – Lou Reid rules! From Doyle Lawson & Quicksilver to Ricky Skaggs and The Seldom Scene, his soaring tenor and instrumental prowess set him apart, and the band Carolina puts him in a worthy spotlight.

11. (*HM) Blue Highway, “Original Traditional” – Honor- able mention! Even though Rob Ickes left the band to join guitarist and vocalist extraordinaire Trey Hensley, when the vocal power- house of Blue Highway lands in a studio, it’s going to be great.

Tomorrow night it’s Tupelo, then on to Durango? Email me at chrisa@gobrainstorm.net.