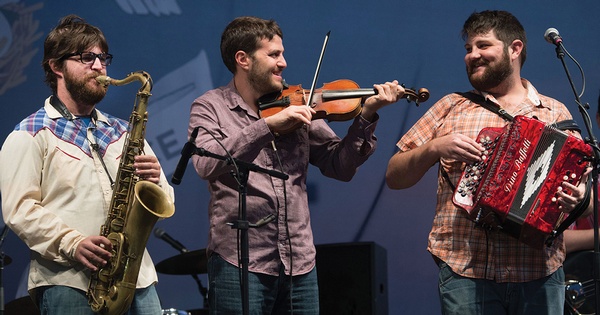 Louisiana supergroup the Revelers cook up a funky roux of swamp-pop, Cajun, country, blues and zydeco at 7:30 p.m. Sat., Nov. 17, at the Concert Hall.

I rushed from work in Ignacio last Friday afternoon and made a mad dash to the Ska Brewing World Headquarters to utilize a handful of Be Local coupons, which were set to expire the next day. I’d clipped a few from the book at work, naturally gravitating toward beer and pizza ... two of the primary food groups that have sustained me for much of my adulthood, along with green chile and Copenhagen. One was for a free flight of tasters; the other for a growler.

Upon entering Ska, I was hailed to a table where Erin and Bonnie were seated. I’ve known these two ladies since the late ’90s, getting into mischief before they were even 21. Erin and her family are practically kin. On the table lay a small stack of Be Local coupons. Great minds think alike!

“You can only use one per visit, and you can order a pint instead of a flight,” Erin
informed me.  She also said the growler fill requires the additional purchase of a new growler. Boo! I already have a garage full of assorted growlers at home. I had no interest in another. Erin and Bonnie quickly departed after slugging their freebie pours. I mosied up to the bar and placed my order with another Erin, this one a Ska bartender. She repeated the rules to me. I chose a Euphoria, which has become my favorite Ska offering for years. Free Euphoria tastes even better than the six pack I bought.

As I finished my free pint, I sampled a few of the Mod Project beers on tap, including the wicked good New England IPA. I was smitten: I ponied up for a to-go quart to sip at home in front of the fireplace. As I sat at the bar, chatting up with Erin #2, I noticed that nearly every customer was exchanging coupons for free pints or taster flights. My reporter’s intuition caused me to call my anonymous source at BREW. She verified that freeloaders armed with “10 percent off” coupons were infiltrating the front lines at the bar. At Carver’s, the same scene unfolded. Then I remembered last Wednesday, when I phoned in an order for a large pie at Homeslice to use my – you guessed it! - $3 off Be Local coupon. Yep ... lots of folks were redeeming theirs, too.

The 11th annual Be Local Coupon Book will be released from 5-7 p.m. Wed., Nov. 28, at the Derailed Pour House. I suggest buying early ... and redeeming early to avoid the Nov. 9 rush next year. Local First was founded in 2008 to work with the local, independent business community in La Plata County to create an economy that values people, the planet and prosperity for everyone. Proceeds from the sale of the coupon book benefit this valuable resource.

Speaking of Ska suds, the Bodo gang releases the second installment from their barrel-aged program, Bumpier & Grindier Imperial Coffee Cream Stout from 5-7 p.m. Friday. For $12.99, you get to reserve a bottle and a seat at the table for a trio of beer and food pairings, chat up the brewers and enjoy the most limited of Ska’s limited releases. I went to last spring’s debut in this series, and it was the best 13 bones I’ve ever spent. These bottles will sell out on Friday.

Celebrate Funksgiving at 9 p.m. Wednesday at the Animas City Theatre with Fort Knox Five and special guest Posh Josh. FK5 is no stranger to the ACT, having brought their D.C. funk fest numerous times in the past to the alley between Main and 2nd. Principal DJ Steve Raskin and company always keep it fresh, but the retro sounds of their classics like “Radio Free DC” and “The New Gold Standard” sound as good as they did a decade ago.

The Revelers are a Louisiana supergroup that will cook up a funky roux of swamp-pop, Cajun, country, blues and zydeco at 7:30 p.m. Saturday at the Community Concert Hall. The band was birthed by founding members of the Red Stick Ramblers and Pine Leaf Boys, called “unquestionably the two groups at the vanguard of the Louisiana cultural renaissance.” Led by singer/songwriters Chas Justus and Eric Frey, they mix traditional Cajun and zydeco dance music with the swing for which the Red Stick Ramblers were known. Glenn Fields and Frey form a magical rhythm section, while Blake Miller is arguably the most prolific French songwriter coming out of Louisiana. Sax, fiddle and accordion augment the sound.

Freddy Todd heads a big bill at the ACT at 9 p.m. Friday. Todd was born just outside of Detroit, where he was weaned on Motown, soul, funk, blues, hip-hop and techno. These roots formed the base for his live show, in which he programs beats & rhythms with psychedelic, funky bass and serenades the crowd with analog synthesizers, keytar, loops and occasional drums and percussion. Glitch-hop producer kLL sMTH joins him, along with openers the Dancing Arrow and Kid Konsume.

The Met: Live in HD continues with a new production of Saint-Sae?ns’ “Sampson et Dalila” at 10:55 a.m. Saturday in the Vallecito Room of the FLC Student Union. Run time is nearly 31⁄2 hours with two intermissions. The original opera premiered in 1877 and is based on a single chapter in the Book of Judges. It became one of the world’s great stories of love and passion, as well as the archetypical depiction of a man betrayed by an immoral woman. Contrary to popular opinion, it is not a reenactment of my first marriage.

The best thing I heard this week is Ange?lique Kidjo’s funky, Afro-pop recreation of The Talking Heads’ classic album, “Remain in Light.” Is it possible to one-up David Byrne and company’s masterpiece? Kidjo may succeed. With producer Jeff Bhasker at the helm – he’s worked with A-list talent like Rhianna, Kanye, Bruno, Drake and Jay-Z – a fourth Grammy is probably in Kidjo’s future.

No loving in our souls and no money in our coats? Email me at chrisa@gobrainstorm.net