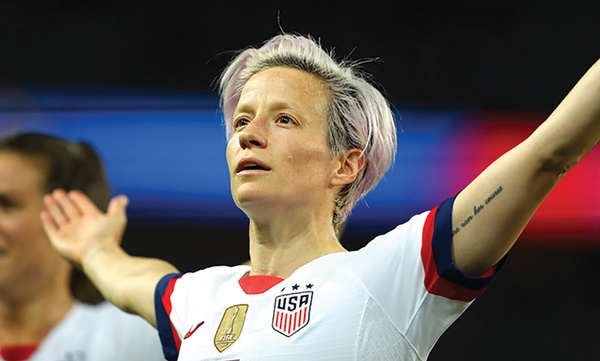 Iidolized many people earlier in my life. Most were sports stars like John Elway or Joe Sakic, or musicians like Bruce Springsteen or Guy Clark. While Elway’s execution of The Drive in Cleveland, Sakic’s record eight overtime goals in NHL playoffs or Springsteen and Clark penning one tune after another for the common man are all worthy accomplishments, they don’t quite make these folks my heroes.

Megan Rapinoe is my hero. The feisty midfielder/winger on the U.S. women’s national team is on the verge of winning her second World Cup. Rapinoe scored all four goals in the Americans’ knockout stage wins over Spain and France (both 2-1 wins), which is impressive enough on its own. But when you consider she did so while engaged in a very public spat with President Trump and his rabid base, it’s a Jordanesque display of will. Imagine Babe Ruth pointing to the centerfield bleachers in Wrigley in the 1932 World Series and then blasting a home run to that exact spot, only while feuding with FDR  off the field. Then imagine Ruth’s hypothetical protest was to show support for civil rights and you’re in the right ballpark.

Rapinoe has called herself a “walking protest,” and it’s an accurate statement. She came out in 2012 and has worked tirelessly for LGBTQ causes ever since. She was the first prominent white athlete to join in support of Colin Kaepernick when he kneeled during the anthem before NFL games to protest police brutality toward African-Americans. Rapinoe famously knelt during a USWNT international friendly in 2016, causing a furious uproar. More recently, she and her teammates spearheaded a lawsuit against the U.S. Soccer Federation demanding gender equity in payment to professional athletes. Let’s face it: the success of American men’s soccer pales in comparison to our women.

Ah, but that flag-waving base. They see Rapinoe as the same demon as Kaepernick, a un-American heretic who doesn’t care for the anthem, the flag and the men and women who died fighting for freedom. I stood at rapt attention before hundreds of college athletic games at the alma mater, and dozens as a player in high school. I sang along quietly, hand over my heart. But my mind wasn’t ever in a patriotic place. My mind was on the task at hand ... winning the game that would start exactly 1:19 after the first note of the anthem.

For the record, Rapinoe stands for the anthem now. Her hand isn’t over her heart, but she stands at rapt attention and has done so through the entire World Cup. I noticed prior to the U.S. men’s Gold Cup quarterfinal game against Curacao earlier this week that several of the men didn’t sing along or place their hands over their hearts. In what’s likely no coincidence, these men were of African-American and Hispanic descent.

The anthem, the flag and patriotic holidays like Independence Day have polarized our nation. If you vote blue, you’re made to feel less American than those on the red side. My old man, a lifelong Democrat, didn’t enlist in the Marines, get shot up in Vietnam and kill for his country to be un-American. (If anything, he enlisted because his best friend had been drafted.) He remains loyal to The Corps, even if he disagrees with nearly every military conflict we’ve engaged in since. The anthem, flag and holidays are all important to him, as they are to me. But more important to us are the things they represent: our unalienable rights underscored in the Declaration of Independence. Life, liberty and the pursuit of happiness. And these rights are certainly more important than rolling tanks through Washington in a military parade better suited for Moscow or Pyongyang.

Was Muhammad Ali the greatest because he won the heavy-weight crown four times? Or was he the greatest because of his social stance? Perhaps it was a little bit of both. Megan Rapinoe is my hero because she stood up for all of our unalienable rights – whether we’re male or female, black or white, straight or gay, young or old, short or tall, fat or skinny, Christian or Muslim, Democrat or Republican. The fact that she can play a little football is the icing on the cake. Kickoff for the World Cup final is 9 a.m. Sunday morning.

We can all celebrate Fourth of July this year with a traditional fireworks display, thanks to a record snowpack and wet spring. Downtown Durango will be painted red, white and blue for a big day that starts at Rotary Park with an All-American breakfast at 7:30 a.m. and the Freedom 5k at 9. At 9:15, the Southwest Civic Winds will perform patriotic songs with readings from FLC’s American Voices. Festivities move to Buckley Park from noon ‘til 4 with an Independence Day Party featuring music by the Devin Scott Ukulele Band and the Pete Giuliani Band, food from the Durango Elks Lodge, beer from Ska and Steamworks and kids’ activities. From 6-6:45, the Stars & Stripes Parade moves down Main from College to 13th St. Finally, from 7-9, KSUT hosts the Independence Day Dance at the Transit Center Parking Lot, with music by the High Rollers, Ska beer, wine, food and kids’ activities. It’s the best vantage point around for the fireworks that will start sometime around 9 p.m.

Music in the Mountains kicks off nearly a month of classical, chamber and world music at 6 p.m. Saturday with a concert by FY5 and StillHouse Junkies at the Bayfield Performing Arts Center. FY5 are Colorado treasures, blending bluegrass instrumentation with folk and country traditions, all powered by Mike Finders’ lyrical excellence. The Junkies? They’re fresh off their runner-up finish at the Telluride Bluegrass band competition.

Finally, the local bluegrass act, People We Know, will play Industry Night at the Animas City Theatre at 9:30 p.m. Monday.

We hold these truths to be self-evident? Email me at chrisa@gobrain storm.net.