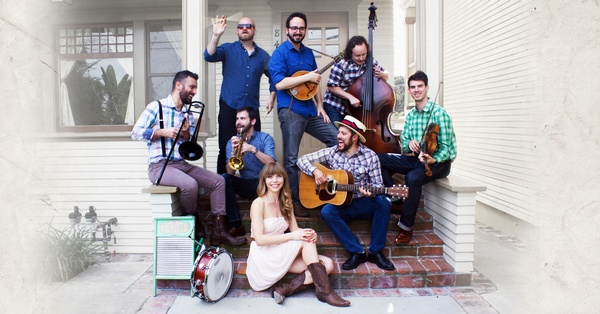 The Dustbowl Revivial brings its Venice, Calif., hybrid of "folk funk" to the on Pagosa Folk'n Bluegrass festival this weekend.

I love Telluride Bluegrass and am counting the days until my 21st straight trip to Town Park, but the lineup is a bit redundant with many of the same acts year after year: Sam Bush, Be?la Fleck, Tim O’Brien, Jerry Douglas, Edgar Meyer and Peter Rowan have become traditions whose sets are welcomed like annual holidays, not much different than Christmas or Thanksgiving. Familiarity with music is much like comfort food. Mom’s chicken pot pie warms your belly more than some fancy fusion at the sushi restaurant.

One festival that bucks the same ol’ trend is Pagosa Folk’n Blue-grass, which takes place on Reservoir Hill Friday through Sunday. At first glance, there are lots of unknown entities on the bill. The Stash Band, the Last Revel, Molly Tuttle, Western Centuries, Ten Strings and a Goat Skin, and the Bare-foot Movement? I have a weekly radio show that shines the spotlight on bluegrass and Americana talent, and I hadn’t heard of these artists until FolkWest promoters Crista Munro and Dan Appenzeller mailed their CDs to KSUT last month.

Want to know a secret? These unknown entities are ridiculously good. Robert Greer, lead singer and guitarist for Town Mountain, told me about Stash a few months ago. He called him a mad genius. Upon multiple listens to Stash’s CD, I concurred. The guy blends Zappaesque lyrics with instrumentation best described as David Grisman-meets-Faith No More. The Last Revel plays bluegrass with moody alt-country undertones. Tuttle is an up-and-coming, old-timey songstress in the Sarah Jarosz/Valerie June mold. Western Centuries is fronted by Cahalen Morrison, a veteran of past Meltdowns and Pagosa festivals with his duet partner, Eli West; they’re a honky-tonk band along the lines of Halden Wofford & the Hi-Beams. Ten Strings and a Goat Skin is a Prince Edward Island trio that fuses punk and Celtic energy like the best of the Maritime Province bands. And the Bare-foot Movement harkens back to the old-time energy of Reeltime Travelers.

If you want familiarity, you’ll recognize the O’Connor Band with Mark O’Connor. The group’s elder statesman is one of the most versatile and skilled fiddle players around, having graced regional stages countless times with such lineups as String in Numbers (a late ’80s bluegrass supergroup featuring O’Connor and the aforementioned Bush, Douglas, Fleck and Meyer) and Mark O’Connor’s Hot Swing Trio. The O’Connor Band’s debut album, “Coming Home,” just won a Grammy for Best Bluegrass Album.

Loudon Wainwright III is a folk music icon. With six decades of recording and touring under his belt – not to mention TV and movie roles as Capt. Calvin Spalding (the singing surgeon) in M*A*S*H and the original keyboard player in Spinal Tap – his dark humor permeates songs that beg your rapt attention.

And while you may not recognize Phoebe Hunt, you may re-call the fiddler/singer’s old band, the Belleville Outfit, which had a huge following in these parts with its blend of Western swing and roots rock. Likewise, you’ve likely heard or seen Luke Bulla as a sideman for Lyle Lovett, Ricky Skaggs or John Cowan. And The Lil’ Smokies are one of the hottest young bluegrass acts around, hailing from the wild country of Montana. They’ve played Telluride Bluegrass, past Pagosa fests and even a recent gig at Animas City Theatre.

But the band I’m most looking forward to is The Dustbowl Revival – a group that’s tough to define. I recently spoke by phone with their frontman, Zach Lupetin. In recent years, they’ve graduated from local clubs to the biggest rooms around, including the Community Concert Hall at Fort Lewis College. They’ll pop their Reservoir Hill cherry this weekend.

“We love coming to Colorado,” Lupetin said. “They’re definitely some of the best roots music listeners ... they have an open mind to the evolution of Americana and folk music in general. We’re definitely the wild card at festivals because we bring a horn section. We bring a breath of fresh air and get people dancing.”

Now 10 years into its career, Lupetin expanded on The Dustbowl Revival’s metamorphosis from a bluegrass-oriented folk group to one that incorporates instrumentation from across the Americana spectrum.

“When we came together in California, we started as an old-time folk and roots group that would later draw from a lot of traditional music like blues, gospel, swing and New Orleans music,” he explained. “We’ve been really playing our own original type stuff in the last two years starting with the live album, ‘With a Lampshade On.’ We’ve kind of found a sound that’s roots soul or folk funk ... definitely less of a retro thing.”

The incorporation of a horn section and electric instruments has taken Lupetin back to his roots. “I grew up playing in rock and blues groups in Chicago and Michigan,” he said. “There’s always been a little more of a rock & roll spirit in everything. I think maybe that’s coming out in the new record ... some hard-hitting, high-energy stuff, but also some more emotional and complex songs.”

If you can’t make it to Reservoir Hill this weekend, consider a trek west to the 14th annual Dolores River Festival, where the Yawpers and Jerry Joseph & the Jackmormons highlight a diverse Saturday lineup in Joe Rowell Park. Local music is well-represented with Sky Pilot, Hello Dollface, Carute Roma and Elder Grown all on hand. Free float trips, river dog competitions and more round out the fun. Music runs from 11 a.m. ’til late.

And if you’re into the blues, Crash Music in the historic Aztec Theatre celebrates its fifth anniversary with Indigenous at 7:30 p.m. Friday. Guitarist Mato Nanji, a member of the Yankton Sioux tribe, channels the ghosts of Stevie Ray Vaughan and Jimi Hendrix – Indigenous’ second record was even produced by Stevie Ray’s former bandmate Doyle Bramhall. During his 20-year career, he’s swapped solos with the likes of Derek Trucks and Jimmie Vaughan at festivals.

If you don’t believe I’m right, just call me tonight? Email me at chrisa@gobrainstorm.net.