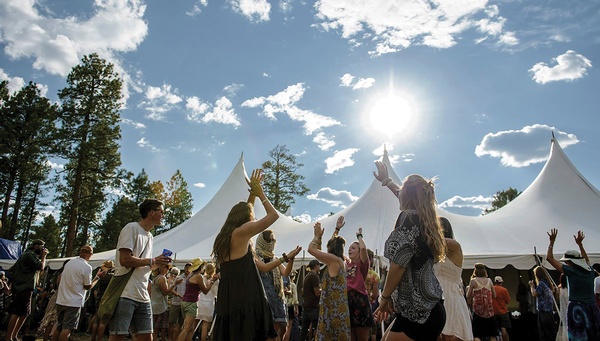 Festival goers at the Four Corners Folk Fest in the Before Times. After a yearlong COVID hiatus, the festival returns to Reservoir Hill in Pagosa Springs over Labor Day./Courtesy photo

For better or worse, we’re fully in the throes of festival season. The 48th annual Telluride Bluegrass Festival got under way last weekend with a socially distanced, three-day, 2,500-spectator event – just a fourth of capacity for Town Park. It continues today (Thur., June 17) through Sunday. Aside from Sam Bush, this weekend features a new slate of artists and a (mostly) different audience. I’ll be among those in attendance, keeping my 24-year Telluride Bluegrass streak alive; last Saturday, I dropped $34 (the daily fee) for audio and visual through a streaming service called, appropriately enough, Mandolin.

Each day is limited to four bands, with the first starting in the 3 o’clock hour and the last ending shortly after 10. That means Thursday with Sierra Hull, Crooked Still, the Jerry Douglas Band and Watchhouse (formerly Mandolin Orange); Friday with Richie & Rosie, the Del McCoury Band, the Decemberists and Yonder Mountain String Band; Saturday with Edgar & George Meyer, Grace Potter, the Sam Bush Band and Leftover Salmon; and Sunday with Mavis Staples, Peter Rowan & Los Texmaniacs, Emmylou Harris and the Telluride House Band (Sam, Edgar, Jerry, Bela, Bryan & Stuart). Yes, there are a handful of workshops and a few Nightgrass shows … even the occasional special guest (who’d have guessed that the Lovell sisters in the blues duo, Larkin Poe, would be joining Sam Bush for his encore last Saturday?)

Two-hundred-fifty 10-person corrals make up the festival grounds this year, nearly all of them in front of or parallel with the sound booth. Each corral is distanced from the next. You get the same corral for each day of the weekend, the same group of friends sitting next to you. Everyone is required to purchase tickets, which is why my wife, Shelly, chooses to stay home with our brood. $400 per child seemed a bit steep – especially since 7-year-old Rosie has the attention span of, well, a 7-year-old. At 14, Otto is simply too cool to hang with Mom & Dad.

Proof of vaccination is strongly suggested, although word on the street has it that nobody was checking. Still, if you plan to attend, bring your card. If you’re not vaccinated, consider whether or not it’s responsible to be in a large crowd. If you think your freedoms trump my health, perhaps you should just stay at home as those of us who are vaccinated don’t want your cooties. Consider heading up to Country Jam in Grand Junction the following weekend with Lauren Boebert and the rest of the flag-waving, gun-toting, red-hat crowd.

It was a combination of Telluride Town Council and Planet Bluegrass that enacted festival restrictions this year. When planning was under way in March and April, the pandemic was still raging. San Miguel County, with its limited medical resources, was understandably cautious. Remember the Spanish Flu of 1918? No town in the U.S. was harder hit per capita than Silverton, just over the hill from Telluride. A walk through of Lone Tree Cemetery in Telluride reveals a rather high number of graves associated with that pandemic.

Had Planet Bluegrass and Telluride Town Council waited until May to make their decisions, the restrictions likely would have been less severe. But promoters can’t wait until the last minute to book their lineups, coordinate staff and volunteers, and otherwise plan for a huge celebration.  4

I know this firsthand because of my day job at KSUT. We put on a pair of festivals each summer – the Four Corners Folk Festival over Labor Day and Pagosa Folk’n Bluegrass, which is usually the first weekend of June. We were in the same boat as Planet Bluegrass in April when we decided to postpone the June festival for a year. Upon consultation with state, local and tribal officials, we felt comfortable hosting a relatively normal festival over Labor Day, with a full lineup, on-site camping, and no social distancing restrictions … the whole nine yards. Yes, we’ll have additional wash stations and encourage safe, sanitary festivating. No, we aren’t requiring proof of vaccination.

We were lucky. Of our 14 acts booked for 2020’s Four Corners Folk Festival, only one – Old Salt Union – will miss out due to childbirth (Wha? Young people spent lockdown at home bumping uglies?) FY5, a regular at our other festival, gladly agreed to take Old Salt Union’s spot. That means Lucinda Williams (yes, despite her stroke last Thanksgiving), Tim O’Brien, Rising Appalachia and a host of others will be joining us on Reservoir Hill. Tickets, camping and vehicle passes are available at the KSUT Presents website, although vehicle passes might sell out sooner rather than later.

The Ride didn’t feel comfortable going forward with an outdoor festival this summer given capacity restrictions. Rather than throw in the towel for another year, organizers opted for a two-week event at a variety of indoor venues like the Sheridan Opera House. Regulars like Rival Sons, Warren Haynes, Big Something and Rose Hill Drive are joined by Yola, Joan Osborne, Black Pistol Fire, Donavon Frankenreiter and more from July 2-9.

The rest of the summer’s music and festival highlights are pretty much unaffected by restrictions. Telluride Jazz (Aug. 13-15) is small enough with just 2,000-2,500 spectators on an average day that Town of Telluride size restrictions won’t matter. Jazz’s top-flight lineup includes Galactic, the Preservation Hall Jazz Band, the Hot Sardines, Bonerama, Robert Glasper and the Budos Band. I’ve already confirmed my lodging for the weekend, even if I don’t have a dance partner yet.

Blues & Brews? Yep, it’s on from Sept. 17-19 … and nearly sold out. Ska’s 25th and 26th Anniversary Party featuring the Mighty Mighty Bosstones and The Pietasters will happen on Sat., Sept. 4 (tickets went on sale this Tuesday and the event will sell out quickly). KSUT’s Party in the Park with the Motet and Afrobeatniks takes place not once, but twice in late July (Friday the 30th in Buckley Park, Saturday the 31st in Pagosa Springs Town Park).

Then there’s Tico Time, with live music and festivals nearly every weekend through mid-October. Each is a BYOB, smoke ’em if you got ’em, let the dog run wild kind of affair. This weekend, it’s a Father’s Day Reggae Beach Party with Dustin Moore, DJ Jahmek, and Jah Sun & the Rising Tide from 1-6 just a stone’s throw from the state line.