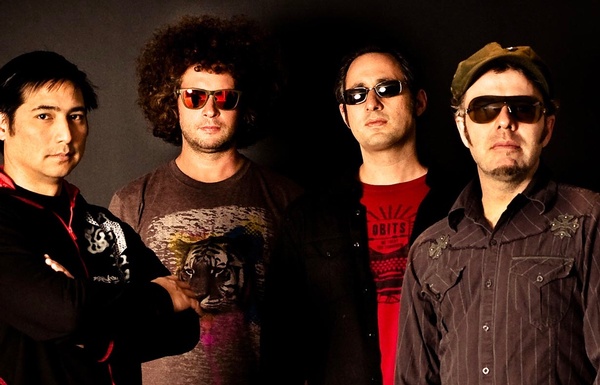 Fort Knox 5 returns to the Animas City Theatre for New Year's Eve. Doors open at 9 p.m., with music starting at 9:30.

Yo ho ho and a bottle of rum. It helps with the eggnog, right? There’s plenty of musical joy coming your way in the next two weeks, so let’s get to it.

KDUR and the Animas City Theatre bring Fort Knox 5 back to town on New Year’s Eve. Fort Knox continues the string of some seriously funky groups that came in five: the Jackson 5, the MC5 and Jurassic 5. FK5 bends

genres like funk, reggae and glitch-hop while using a broad range of musical elements like live instrumentation and electronic effects. FK5 has toured and shared stages with such acts as the Beastie Boys, the Black Eyed Peas, Gwen Stefani, Public Enemy, Snoop Dogg and others. Locals Posh Josh and DJ Mateo are also on the bill. Doors open at 9 p.m., with music starting at 9:30.

Friday, Dec. 30, will be a magical night at the ACT ... literally, as Harwood & Woodward perform an all-ages show. Harwood & Woodward is Colorado’s only big-illusion production. Their modern take on the fantasy and thrill of Vaudeville’s travelling magician days is fast-paced, fun and set to swing and ragtime music. The duo will dance, sing and take you to an alternative reality. Doors open at 6:45 p.m. and the show starts at 7:30.

Telluride has become a second home for Yonder Mountain String Band since its formation in December 1998. The group’s Saturday afternoon sets on the Fred Shellman Stage, Friday night soirees at the Sheridan Opera House and Wednesday night kick-offs at the Conference Center in Mountain Village are annual highlights to Telluride Bluegrass. Less frequent are mid-winter appearances. This year, Club Red in Mountain Village presents YMSB on New Year’s Eve. Things kick off at 8:30 p.m.

The Yonder concert isn’t the only craziness happening in Telluride around New Year’s, as a festival-size lineup of music comes to 8,750 feet above sea level.

John McEuen, of the Nitty Gritty Dirt Band, plays the Sheridan Opera House at 7 p.m. Wed., Dec. 27. A founding member of the Dirt Band, he performed with them for nearly 20 years, recording such classic albums as “Will the Circle Be Unbroken” and “Uncle Charlie & His Dog Teddy.” I’ve heard countless musicians and listeners point to the former as the reason they first became bluegrass fans. He retired from the Dirt Band in 1986 to pursue a solo career but returned in 2001 before quitting the group again late this year. Along the way, he’s championed rootsy music like bluegrass, old-time and country, both solo and in collaborations with comedian, actor and banjo player Steve Martin. His solo records like “String Wizards,” “Acoustic Traveller” and 2016’s “Made in Brooklyn” stand alongside his best work with the Nitty Gritty boys.

Elephant Revival has a pair of shows at the Sheridan at 9 p.m. on Friday & Saturday, Dec. 29 & 30. This quintet has evolved into an acoustic folk powerhouse in its 11-year career by blending Scottish/Celtic fiddle tunes, original folk pieces, traditional ballads, bluegrass and indie rock into a unique sound all brought together by Bonnie Paine’s soft, breathy vocals.

And Sky Ute Casino is putting on its New Year’s Eve “Bayou Bash,” complete with a Cajun buffet (6-8 p.m.), an appearance from Troy Landry, who hails from the History Channel’s “Swamp People,” and the Creedence Clearwater tribute band Fortunate Son, performing from 9 p.m.-12:30 a.m.

This week’s Top Shelf list looks back at some of my favorite concerts of 2017. I excluded festival sets in Telluride and Pagosa Springs to truly keep it local.

1. Dave Alvin & Jimmie Dale Gilmore, Henry Strater Theatre, March 22. Two Americana pioneers, two stools, two guitars and a slew of material. These guys swapped songs like they were sitting on a back porch with a six pack.

5. Town Mountain, Durango Arts Center, April 23. All of their sets rocked, but they pulled out all the stops for their Melt-down-closing shenanigans, including having my 10-year-old son, Otto, introduce them.

6. The Black Lillies, Henry Strater Theatre, May 4. Cruz Contreras’ band evolves on a constant basis, but his singing and songwriting remain as soulful as anything in the alt-country world today. The recent departure of Trisha Brady for a solo career didn’t sully the show.

7. Shinyribs, Buckley Park, Aug. 4. These guys were the opening band to the Iguanas and completely stole the show. Kev Russell has added horns and backing singers to his post-Gourds swamp pop band and the result is unmistakable glee.

8. Dweezil Zappa, Community Concert Hall, Aug. 10. Although he can’t bill this “Zappa Plays Zappa” due to a sibling squabble, Dweezil and his band dug deep into Frank’s catalog. Concert Hall czar Charles Leslie thanked KDUR’s Bryant Liggett from the stage for pestering him for the past several years to book this one. I too shall thank Liggy in this public forum.

9. FY5, Meltdown on the Mesa, Sept. 23. This Four Corners favorite was the first national band to headline the Meltdown’s fundraising affair on Ewing Mesa. Even though torrential rains limited the crowds, FY5 played old favorites and debuted new tunes from a still-yet-to-be-officially-released new record. Always the crowd-pleasers, they made sure to pack along a case of the CDs that won’t go on-sale to the public ’til 2018.

10. Black Violin, Community Concert Hall, Sept. 27. Classical met hip-hop for a dance party like no other.

Don’t mess around with those silly toys? Email me at chrisa@gobrainstorm.net.