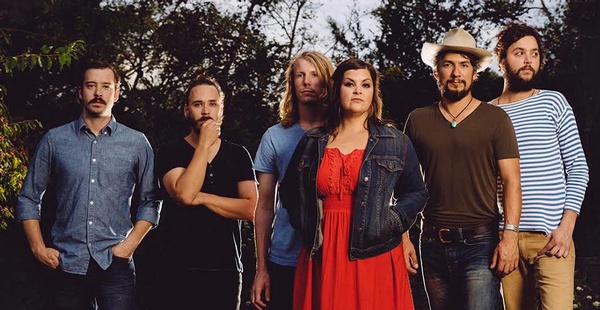 Labor Day Weekend marks the end of the traditional summer tourist season. Sadly, it also marks the beginning of the end of festival season. Fortunately, the folks at FolkWest pulled out all the stops for their 21st anniversary by booking one of the best lineups ever assembled on Reservoir Hill. The festival runs Friday through Sunday.

The latter has an interesting back story. Woody Guthrie’s daughter, Nora, curated her father’s collection of lyrics that were  never set to music. Much like Billy Bragg & Wilco added lyrics to several of Woody’s poems for both volumes of “Mermaid Avenue,” Del was given a few dozen sets of lyrics and carte blanche to set them to music. Nora became a fan of Del’s when he and the boys joined Steve Earle back in 1998 on “The Mountain.”

After seeing Del live a few years back, she knew he was the right man for the job. Attendees at this summer’s Telluride Bluegrass Festival were treated to such Guthrie/McCoury co-writes as “The New York Trains” and “Ain’t a Gonna Do.” They’ll throw down at 8 p.m. Saturday on the main stage, probably interspersing a few of these tunes into the setlist.

Darrell Scott is a regular in Pagosa. While it’s billed as a “folk festival,” the number of singer/songwriters on the bill is typically low. Four Corners, much like other folk events, is more of an Americana affair, melding bluegrass, new acoustic and adult contemporary acts. Scott (and Oklahoman John Fullbright, who also appears this year) are throwbacks to the old troubadour days. Since he last set foot on Reservoir Hill three years ago with Tim O’Brien, Scott has released a pair of records: 2015’s “10: Songs of Ben Bullington” and the brand new “Couchville Sessions.”

I’ve seen Scott dozens of times, as a sideman to Guy Clark, Robert Plant and others, as a duo with Tim O’Brien, solo with just his own accompaniment on a variety of instruments, and in a host of touring bands. His voice, his words and his prowess on any number of stringed instruments commands an audience’s attention. Scott plays at 4 p.m. Saturday.

The O’Connor Band featuring Mark O’Connor. The patriarch, of course, is a violin-wielding legend in the bluegrass, country, jazz, classical and chamber worlds. His family band, which includes son Forrest, wife, Maggie, and soon-to-be daughter-in-law, Kate Lee, is cut from the same melodic, harmonious bluegrass cloth as Alison Krauss & Union Station with a few twists ­– namely the triple fiddle assault of Mark and the two women. They’ll take the stage at 5 p.m. Sunday.

The Milk Carton Kids, a Los Angeles-based folk duo with an ear toward Greenwich Village, wraps up the fester at 7 p.m. Sunday. Spotting the influences is easy: their harmonies evoke easy comparisons to Simon &  Garfunkel and the Everly Brothers, with a splash of Gillian Welch & David Rawlings. More than just retro, they guide thousands of youngsters to the vibe of the early ’60s folk revival.

The Black Lilies are the perfect blowout band for Friday night shenanigans, and play a 7 p.m. set on the main stage. Longtime favorites across the Four Corners, they bring hard honkytonk to the bill. Their latest record, “Hard to Please,” nearly cracked my Top 10 a year ago. Nine months later, it would probably rank in the Top Five.

Trout Steak Revival has a pair of sets Friday: 2 p.m. on the main stage and 10 p.m. on the late night stage in the Ponderosa Pavillion. These guys were the breakthrough Colorado bluegrass band in 2015 and have only gotten better.

If acoustic guitars aren’t your thing, the 24th annual Four Corners Motorcycle Rally in Ignacio brings a handful of more rockin’ bands to the area. Los Lonely Boys return to Ignacio to play at 10 p.m. Friday, bringing their Stevie Ray Vaughan-inspired Tex-Mex blues and brotherly harmonies with them. And Rockin’ Dopsie & the Zydeco Twisters play Cajun and Zydeco straight outta the Big Easy on a pair of Saturday night sets (7:30-9 p.m., 9:30-10 p.m.) and a lengthy Sunday affair (9-11:45 p.m.).

The James Ranch Burger & a Band series wraps up tonight with a fairly big name: SHEL, the four-sister outfit formerly from Fort Collins and now based in Nashville. Sisters Sarah, Hannah, Eva and Liza Holbrook are regulars on the festival circuit and were one of the most popular bands at the free concerts in Buckley series a year ago. Tickets to this one are a bit more pricey ($55) than usual, but include a farm-to-table, award-winning burger, a seasonal side, a drink, reserved seating and the sisterly sounds of SHEL.

The wine and brew trains roll down the track Saturday and Sunday, respectively. Each day has a 10 a.m. departure and 4:40 p.m. return; catering from Norton’s (Bavarian for the beer, Mediterranean for the wine); and tunes (The Badly Bent on the beer train, Jeff Solon jazz duet on the wino choo-choo). Tickets are going fast.

With their 20th anniversary celebration on the horizon, Steamworks taps its Sparkle Berry September firkin at 3 p.m. Friday. It’s based in their classic Rock Hopped Pale Ale, with 30 pounds of different varietals of whole leaf hops from the Pine River Hop Farm. Fresh blueberries were added to balance the bitterness of the pale ale.

My childhood is rapidly fading into the dark recesses of my mind, especially with this week’s passing of comic legend Gene Wilder at age 83. His 1971 portrayal of the mad genius chocolatier in “Willy Wonka & the Chocolate Factory?” was my first exposure to fantasy. Wilder’s vocal take on the theme song, “Pure Imagination,” certainly ignited mine. Last year, Les Claypool and his zany cohorts in Primus recaptured it with their psychedelic, visionary redo of the soundtrack.

Forty-five years ago, Wilder made me dream. And I’ve never stopped. Thank you, Gene.

Living there, you’ll be free? Email me at chrisa@gobrainstorm.net.