GDIs, I'm With Her and Bernstein 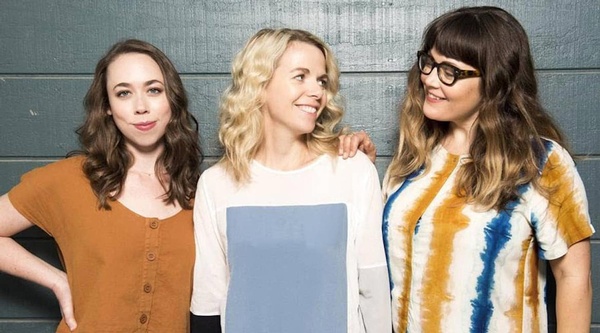 Bluegrass powerhouse trio I'm With Her plays the Concert Hall on Wednesday night.

If you’ve spent the past month spanking your e-monkey with web searches of Stormy Daniels and Karen McDougal, you’ve probably missed El Orangutan’s War on the Truth. It seems every time El Pendejo Naranjo tweets his latest tantrum, another flock of right wing pigeons flaps their collective wings. Take Sinclair Broadcasting, which mandates “fake news” readers from its news anchors across the country. Why let your local affiliates decide for themselves when you can rule with an iron fist! Fortunately, Sinclair’s antics fail to fluster independent media.

KDUR’s spring membership drive kicks off this Friday and continues for eight days. In an age when Sinclair, Fox and Breitbart have declared war on the truth, KDUR broadcasts alternative and trusted voices like the BBC News, Democracy Now! and KCRW’s Left Right and Center. Musically, the station’s lineup is as diverse as its dozens of volunteer DJs, ranging from classical to bluegrass to alt-country to indie rock to hip-hop, with everything in between. I spent more than two decades as a volunteer DJ there before becoming a paid employee at KSUT. As someone whose station shares the bottom part of the dial with KDUR – that freakishly wonderful public radio/community radio territory – I truly know the value that these alternative voices and sounds add to our regional culture. Now more than ever, community radio needs your help. Pledge at kdur.org or call them at 247-7262 to pledge your support.

The talented female group I’m With Her takes the stage at the Community Concert Hall at 7:30 p.m. Wednesday. The trio consists of Sara Watkins (best known as fiddler for Nickel Creek and, more recently, as a solo performer), Sarah Jarosz and Aoife O’Donovan (a former member of the popular indie string band Crooked Still). Individually, they’ve played the larger festival stages of Telluride and Pagosa Springs for decades; collectively, they’ve only recently burst onto the scene. A couple of years ago, the Four Corners Folk Festival audience was treated to an I’m With Her performance even though they’d never recorded together as a trio. A few months ago, they dropped their debut album, “See You Around,” which has garnered heavy airplay on public radio ever since. Alt-country singer/songwriter Jonny Fritz, who previously recorded as Jonny Corndawg, opens the show. Don’t dilly dally: this one was selling quickly earlier this week.

KSUT and the Animas City Theatre present spirited, deep and thought-provoking singer/songwriter Trevor Green at 8 p.m. Wednesday. Green has released five studio albums, including his most recent, “Voice of the Wind,” plus an EP, “Collide.” All of his work is captivating and spiritual, bringing forward the messages of our ancestors – particularly those of indigenous cultures. His latest record is layered in five guitars, three didgeridoos and an array of percussive instruments. His music has both Native American (his adopted brother is Navajo) and Aboriginal roots (he recently journeyed to Australia for two months to immerse himself in Aboriginal music and roots).

The Durango Celtic Festival welcomes Scottish performers Ross Martin & Eilidh Shaw to the Henry Strater Theatre at 6:30 p.m. tonight (Thurs., April 5). Between the two of them, Martin and Shaw have appeared on more than 100 albums. Martin is best known as the guitarist for Daimh, while Shaw is the fiddler for The Poozies. They’ve been at the heart of the traditional Scottish music scene for the past 20 years.

The San Juan Symphony concludes its season with a celebration the 100th birthday of Leonard Bernstein at 7:30 p.m. Saturday at the Community Concert Hall. Bernstein could have chosen any one of several successful careers – pianist, composer, conductor, writer, educator or Broadway songwriter. Instead, he chose to excel at all of these things. Under the baton of Music Director Thomas Heuser, the symphony will feature music from the movie, “On the Waterfront,” familiar favorites from “Candide” and “West Side Story,” plus music by one of Bernstein’s greatest American contemporaries, Aaron Copland’s “Hoe-Down.”

The San Juan Symphony’s Youth Orchestras will step out at the Bayfield Performing Arts Center at 7 p.m. Monday, under the direction of Lech Usinowicz. The concert will feature solo violinist Casey Reed, winner of the second annual SJS youth concerto competition. Reed, an eighth-grader at Escalante Middle School, will perform the Max Bruch Violin Concerto No. 1 in G minor. Like the SJS, the youth orchestras will honor Leonard Bernstein’s 100th birthday by performing his “West Side Story Overture” and other selections.

Classical fans can also enjoy Cocktails with the Conductor from 6-8 p.m. Sunday at the Sorrel Sky Gallery. Conductor Guillermo Figueroa will be on hand as Music in the Mountains kicks off another festival season. RSVPS can be made at musicinthemountains.com or by calling 385-6820.

A new month means a new firkin at Steamworks. Sweet Ginger is this month’s release, scheduled for a 3 p.m. tapping on Friday. The base is Steamworks’ popular Third Eye PA, a pale ale with a strong malt backbone that balances the significant hop presence. “Third Eye has a malty sweetness and moderate floral and citrus-like aromas,” head brewer Ken Martin said. “We then used a sweet ginger puree and added some pure cane sugar in the firkin re-fermentation process. I anticipate that all these flavors are harmonizing and producing a truly delicious beer.”

The best thing I’ve heard this week is the latest from blues pianist Marcia Ball, “Shine Bright.” By my count, it’s her 13th solo studio record since her 1978 debut. Throughout her career, Marcia has always straddled the Texas/Louisiana line by mixing Lone Star, Cajun and Crescent City influences. “Shine a Light” is perhaps the most N’awlins influenced of the lot. She channels the piano chops of the late, great Professor Longhair on tunes like “Life of the Party” and “When the Mardi Gras is Over,” while covering such legends as Ray Charles, Ernie K-Doe and Jesse Winchester. The first two singles – “Shine Bright” and “I Got to Find Somebody” – stand alongside previous Marcia Ball classics like “Crawfishin’” and “Hot Tamale Baby.” It’s a boozy, piano-driven, horn-infected classic, produced by Los Lobos saxman Steve Berlin (who also blows his own horn on five tracks).

We can do the innuendo, we can dance and sing? Email me at chrisa@gobrainstorm.net.