Getting spicy at the Concert Hall 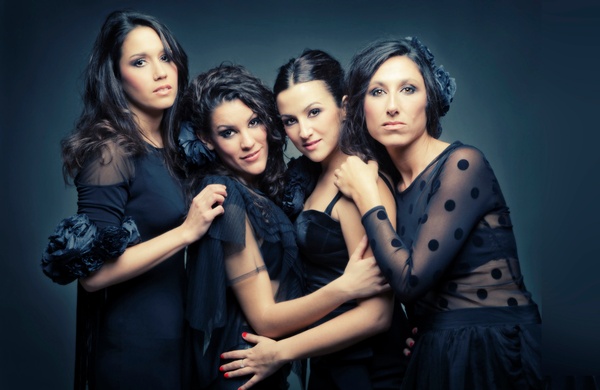 La Migas bring Flamenco and Mediterranean music to the Concert Hall at 7:30 p.m. on Tuesday.

Don’t say I didn’t warn you. A few weeks ago, I vexed what a Donald Trump presidency would mean to women. Then last Friday rolled around. Like most people with a half a conscience, I was appalled at the 2005 tape that revealed a candidate for president’s true feelings about women. That deed also exposed his base supporters for what they really are: cavemen who long to take us back to the “Mad Men” days where women who toiled as secretaries and stewardesses were merely there for the pleasure of their bosses. You know … back when America was great.

Trump’s words and subsequent insincere apologies didn’t surprise me. But his antics at the second presidential debate did. Like many folks, I’ve joked about the Trump/Hitler comparisons. I never truly thought the man was a fascist, simply a rather spectacular asshole. But he crossed the line from butt-of-joke to nightmarish reality Sunday when he said, “If I win I am going to instruct my attorney general to get a special prosecutor to look into your situation.”

So that’s what it’s come down to? Locking up those with opposing political views? Making folks who practice a different religion register with the government? Censoring the media? Closing the borders? It seems Hitler did all of those things, with millions of Germans climbing on his nativist and populist rhetoric.

The political pundits and pollsters claim Clinton’s lead is growing. But I have a handful of really close, lifelong friends who vote Republican without a second thought. Fair enough. I still love these brothers and buddies. I’m worried that Trump still owns the white male vote – particularly those without a college education. “I love the poorly educated!” he boasts.

My old man was poorly educated when he volunteered for the Marines in 1967. Fifty years later, proudly clutching his Purple Heart and Bronze Star, he’s still fighting. He’s fighting that no American soldier will be sent off to future, futile wars. He’s voted Democrat ever since that chopper pulled him out of the A Shau Valley.

It’s a beautiful world out there. Fortunately, some of that beauty comes to the area this week.

Las Migas brings an intoxicating blend of Flamenco and Mediterranean music to the Community Concert Hall at 7:30 p.m. Tuesday. Formed in 2004 by a group of Spanish women who studied at Escola Superior de Musica de Catalunya, the quartet hails from four different cities: Barcelona, Sevilla, Cordoba and Lerida. Guitarists Marta Robles and Alicia Grillo are Andalusian, while the other two members – Roser Loscos (violin) and Alba Carmona (dancer) – are Catalans. They offer melodies that range from powerful to passionate to playful, all for the love of Flamenco.

Todo Mundo headlines a benefit concert for the Mancos Creative District Saturday evening at the Mancos Opera House. You may have caught them at KSUT and Music in the Mountains’ Parties in the Park in 2014 and ’15. Their album “Conexion” has been in regular rotation on the airwaves ever since. Todo Mundo fuses music from five continents, including reggae, Spanish rumba, Brazilian, Balkan and Middle Eastern styles. Doors open at 6:30 p.m., with an opening set by local world music favorites Afrobeatniks at 7 and Todo Mundo at 8:30. Afrobeatniks has played numerous regional festivals this year and opened for KSUT’s 40th anniversary celebration with Michael Franti & Spearhead.

If you’ve read this column regularly through the years, you probably know my fondness of Finnders & Youngberg, the Front Range bluegrass/Americana quintet that regularly appears at the Durango Bluegrass Meltdown and Reservoir Hill festivals in Pagosa Springs. They drop by our region for evening shows Friday at the Sunflower Theatre in Cortez and Saturday at Crash Music in the historic Aztec Theatre. Their latest record, “Eat the Moon,” is simply stunning. Like their other albums, this one is primarily a vehicle for tunes by singer/guitarist Mike Finnders (although bassist/singer Erin Youngberg contributes two songs and mandolin player Rich Zimmerman adds one). Banjo and pedal steel ace Aaron Youngberg – quite possibly the finest roots musician and record producer in Colorado – is all over “Eat the Moon,” too. But what has really caused the group to hit its stride are the melodies that Zimmerman and fiddle player Ryan Drickey provide. All five contribute to song arrangements. Their love of playing together is evident, both on vinyl and in live performances. This group deserves to graduate to bigger stages. In the meantime, consider each concert they play in our parts a must-see event.

Big Brothers Big Sisters holds a Suitcase Party from 6-9 p.m. Friday at the AvFlight Hangar at the La Plata County Airport. If you’re not familiar with a suitcase party, here’s the Cliff’s Notes version: Show up that night with a packed suitcase, buy a raffle ticket, and if you’re lucky enough to win, you’ll be whisked off to a three-night vacation to a mystery resort location. The winning individual (or couple, if you choose to bring your significant other) must purchase their airline ticket(s), but resort lodging and meals are covered. Three pairs of tickets for the eight-person flight will be auctioned off that night as well. The event includes live and silent auctions, food and drink, plus music from the Kirk James Blues Band. All proceeds benefit BBBS.

Congrats to local and regional brewers for their spoils at the 2016 Great American Beer Festival. Steamworks led the way with silver medals for Backside Stout (in the Oatmeal Stout category) and Slam Dunkel (German-Style Wheat). Carver’s also took home silver for Lightner Creek Lager (American-Style/German-Style Light Lager), while Ska’s official beer of summer, Mexican Logger, collected a bronze (American-Style/International-Style Pilsner). Telluride Brewing’s Face Down Brown also made the podium with a bronze (American-Style Brown Ale). Maybe those heavy metals in the water have the same effect on beer as San Francisco Bay air has on sourdough bread.

We make her paint her face and dance? Email me at chrisa@gobarainstorm.net.