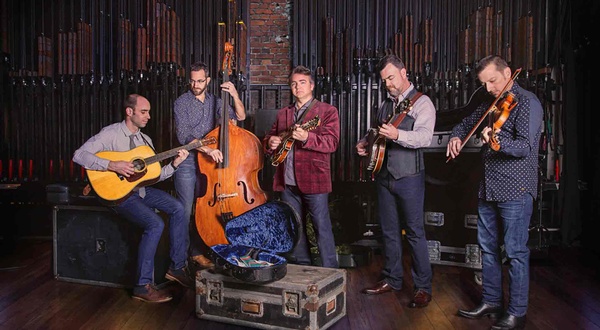 The Travelin' McCourys and friends will perform this weekend at the Rhythms on the Rio music festival in Southfork.

“Will the Circle Be Unbroken?” is an old Christian hymn penned by Charles Gabriel and Ada Habershon in 1907. A.P. Carter reworked the tune nearly three decades later as a funeral hymn, changing the title to “Can the Circle Be Unbroken,” utilizing the same music with a different verse structure, lyrics and a modified chorus. Later artists like Bill & Charlie Monroe, the Nitty Gritty Dirt Band, Willie Nelson and Darrell Scott turned it into an American bluegrass and country standard.

The lyrics simply deal with a standard, simple Christian theme of going to heaven. However, the song has taken on a new meaning of one generation passing on the musical tradition to another.

Two local festivals this weekend have taken Habershon’s words at heart. Proceeds from both Rhythms on the Rio and the Pine River Festival benefit local music education. The former is presented by the South Fork Music Association, a volunteer, nonprofit organization that provides free musical instruments and lessons to children throughout the San Luis Valley. All proceeds from Rhythms go directly to the cause. Similarly, the Pine River Festival raises money for the Be Frank Foundation, a Bayfield-based nonprofit that raises money for music scholarships, instruments and lessons for all La Plata County kids with an interest in music.

The buzz around Rhythms on the Rio is that it’s one of the best little festivals around. The festival boasts three days of music (Friday through Sunday), all-night campground picks and on-site camping in a meadow just east of South Fork on the banks of the Rio Grande. Hippies rejoice! There’s even exclusive, primo campsites reserved for VW microbuses! This year’s lineup is an eclectic mix that includes the Travelin’ McCourys, Dirty Dozen Brass Band, Fruition, Larry Keel Experience, Kyle Hollingsworth Band, the Main Squeeze, Wood Belly and many more.

One of the highlights is Saturday night’s Grateful Ball (7:45 p.m.), which features the Travelin’ McCourys and friends. Some ringers have been added to the lineup since the tragic passing of one-time headliner Jeff Austin last month, and they’ll no doubt perform something in his honor. The Grateful Ball was originally a tour by Austin and the McCourys a few years back that featured full sets by each, followed by a collaborative set of Grateful Dead music. Rhythm on the Rio’s artist-at-large, Bill Nershi of the String Cheese Incident, will no doubt take part, as will Jeremy Garrett (Infamous Stringdusters), Kyle Tuttle (Jeff Austin Band), Keel and members of Fruition.

There’s a Durango feel to Rhythms on the Rio, too. Elder Grown will be there, playing at 5:30 p.m. Friday. Woodland Remedy, a Midwestern bluegrass outfit that recently relocated to D-Town, performs at 1 p.m. Sunday. And YogaDurango offers free one-hour Yoga at 9:30 a.m. Saturday and Sunday.

As artist-at-large, expect Nershi to be all over. He and Kyle Hollingsworth are SCI bandmates, so expect him to join Kyle onstage 9 p.m. Friday. He’s also good buddies with Keel and company, so expect some guitar pyrotechnics at 5 p.m. Saturday. Closer to home, the second annual Pine River Festival starts up at noon Saturday and runs to 9:30 p.m. From noon ‘til five, there’s a traditional brew fest with nearly 20 breweries, cider houses, distilleries and wineries serving unlimited pours. Simultaneously, seven local grillers will compete in a barbecue competition. At 5 p.m., the free tastings end, and music takes center stage. National headliners include the Accidentals (6 p.m.) and the Steel Wheels (8:30), with local artists like the StillHouse Junkies, High Country Hustle and Midnight Backhand performing during the grand tasting. Read the full preview in this week’s Telegraph, p. 14.

The Noms play the final free Concert @ The Park from 5:30-7:30 p.m. tonight (Thurs., Aug. 1) in Buckley Park. This six-piece Albuquerque band brings energy, passion and life to stage with their unique brand of harmonic rock. Their diverse influences include Dave Mathews , Stevie Ray Vaughan, Selena, One Republic and Paul McCartney.

The Sheridan Opera House in Telluride hosts Mini Woodstock tonight and Friday, with two nights of peace and tributes to Jimi Hendrix and Janis Joplin. Kiss the Sky: The Jimi Hendrix Re-Experience plays at 9 p.m. tonight, while Just Like Janis takes the stage at 9 p.m. Friday. Kiss the Sky boldly presents the world’s most historically accurate Hendrix tribute ever, while Just Like Janis relies on the same attention to detail to capture the essence of the legendary blues-rock star.

The Sheridan also hosts up-and-coming songwriter Jeff Cramer at 8 p.m. Tuesday. A Wisconsin native who relocated to Denver, Cramer’s songs cover the stories and sounds from a decade on the road. He released his debut album, “Northern 45,” in January and draws comparisons to Hayes Carll and Whiskeytown.

What goes better than old-time string band music and moonshine? Both have deep roots with the Scots-Irish immigrants to Appalachia centuries ago. After helping the Americans defeat the Brits in the Revolutionary War, these immigrants were unjustly taxed on their favorite beverage, leading to the Whiskey Rebellion and what we now know as moonshine. Thus, it’s Drunk History at Durango Craft Spirits when Six Dollar String Band takes the stage at 7 p.m. Friday. I imagine Brendan, Tony, Stephen and Robin have a whiskey song or two up their sleeves.

KSUT’s 16th annual Party in the Park is still two weeks away (the Motet and Afrobeatniks will perform in Buckley Park on Sat., Aug. 17), but the public radio station for the Four Corners is looking for volunteers to help with set up and clean up, at the wine and cocktail booths, and at the front gate. Volunteers will receive free admission and a drink token for their efforts. Anyone interested can email me at my work email, chris@ksut.org.