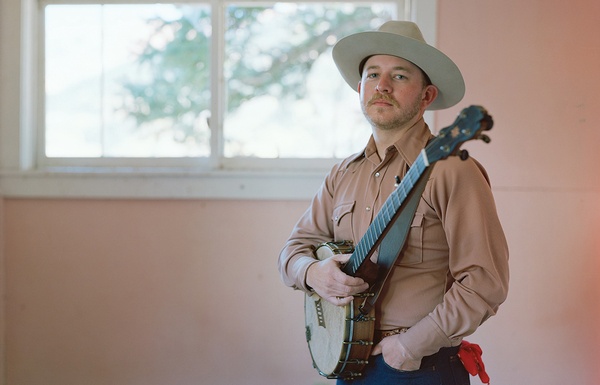 Everything that’s old is new again … especially for those dabbling in old-time string band music. Take Cody Tinnin, for example. Best known as the upright bassist for StillHouse Junkies, Tinnin spent much of the last year practicing, writing, recording and perfecting his old-time game on banjo and fiddle.

The result is the 10-song cassette tape, “Perennial,” released a couple of months back. You read that right – cassette. Tinnin opted not to put this out on CD or vinyl, explaining that those mediums were outdated. “Nobody my age is buying CDs anymore,” he told me. I didn’t bother telling him that the cassette was even more of a dead medium – I just didn’t have the heart. That said, each tape has a download card inside it allowing the user to access the album in a format that’s a wee bit more contemporary.

Cassettes aren’t a setback for me. My 2006 Toyota Tundra has an AM/FM stereo with a six-CD changer and cassette deck that was factory issue back in the day, and I frequently keep a small assortment of tapes in the center console. I think the current batch includes a Steve Earle & the Dukes “Exit O” cassette that Beth Lamberson gave me at a garage sale; the “Eddie & the Cruisers” soundtrack I bought back in the mid ’80s; a handful of fifth-generation Grateful Dead and Jerry Band shows; and the odd mixtape. Thousands more are stored in my garage for the home stereo, which still has a tape-to-tape dual rack for dubbing cassettes for friends … in other words, mostly collecting dust since 1998.

The Tundra’s CD player gets a lot more use than the cassette. Since my real job is in radio, and I still get a handful of new releases each week from A&R folks, I use the 40-minute drive to and from the station as a chance to preview albums.

Maybe my pal was onto something with this cassette-only release. For luddites and low-fi junkies like me, the cassette tape has a set it-and-forget it quality. I popped the little yellow tape into my truck’s player a few weeks ago after he gave me a copy at Tico Time Bluegrass. I haven’t ejected the tape or switched the mode to CD ever since.

Fans of old-time music will be happy to hear that the cassette isn’t the only thing retro. Jon Atkinson traveled to Durango from Bristol, Va., a place that knows a thing or two about old-time music, what being just 20 miles from the Carter Family Fold, where the famous musical family once lived. Atkinson is the in-house engineer at BigTone Studio, which hails itself as America’s most authentic tape-recording venue. There’s nothing digital in Atkinson’s work – he uses vintage microphones, Ampex tape machines, and tube recording consoles, limiters, equalizers and pre-amps. “There wasn’t even a computer in the room,” Tinnin said of the recording session.

The sessions were done live – no overdubs. The resulting 10 songs – which include seven originals, a cover of Don Stover’s “Things in Life” (often associated with Tim O’Brien, who has recorded versions with Hot Rize, Jerry Douglas and solo), and traditional numbers “Moonshiner” and “Bury Me Beneath the Willow.”

“‘Perennial’ is a snapshot into my personal study of clawhammer banjo, old-time and my lifelong relationship with music,” Tinnin explains in the liner notes. “Years before I joined StillHouse Junkies and became a full-time musician, my grandmother, Mary Bartee, told me that she believed music was my true calling. It has taken some time and searching to find my path as a musician but in the past few years, I believe I have finally found what it is I’m supposed to do in this life. Turns out Grandma was right.”

The album isn’t to be confused with Tinnin’s work in StillHouse Junkies, who are expected to resume touring outside La Plata County this summer. It’s something totally different. Don’t expect to hear “Perennial” songs or Tinnin plucking a banjo at a Junkies concert any time soon. That trio – which includes guitarist/mandolin player Fred Kozak and violinist Alisa Wolf – has a unique sound rooted in equal parts bluegrass, country, folk and rock. StillHouse is also primarily a vehicle for the words and music of Kozak, the group’s chief songwriter and main vocalist … although Tinnin’s “Five Doors Down in Leadville” often kicks off Junkies shows. “Leadville” didn’t make it onto “Perennial” as it’s a song that Tinnin wrote specifically for a future StillHouse album.

Which is all fine and good, as it shows how he’s juggled band responsibilities with solo endeavors. Besides, there’s no need for a love song on an old-time tape that’s chock full of songs about death, murder and work. Videos for “Haskell Town” and “No Man for Workin’” live on Tinnin’s website, YouTube and social media. Like the cassette, retro is theme in these two videos produced by Rees Gibbons.

The old-time community has already taken notice. “Old-time banjo lovers need to hear Cody Tinnin,” noted legendary musician Bruce Molsky, who was supposed to be on the bill at the 2020 Durango Bluegrass Meltdown that was cancelled by COVID-19. “His arrangements are solid and clean, playing strong and the compelling timbre of his voice draws you into a very personal and fearless musical statement. I love how he gives respect and freshness to oldies like ‘Things in Life’ and ‘Moonshiner,’ and presents them alongside new originals.”

Even Tinnin’s description of the Oct. 19, 2020, recording location is retro. In the liner notes, he writes “recorded and mixed live to tape at The Little House in Animas City.”

Animas City? That little town that was founded in 1876 on the banks of the Animas River some 2 miles north of Durango?

Yep, that one. At Tico Time, Cody’s father, Glenn, sported a 1970s-style white ringer t-shirt with “Animas City” emblazoned across the chest. The simple design was done by Tim Kapustka of Cabbage Creative. Not coincidentally, Kapustka did the artwork and layout for Tinnin’s cassette.

The tape (and matching T-shirt, also designed by Kapustka) is available on Tinnin’s website and, when he remembers to pack them along, at Rolling Junkies Revues and other live shows.

When the long shadows come, I won’t be the only one? Email me at chris@ksut.org.