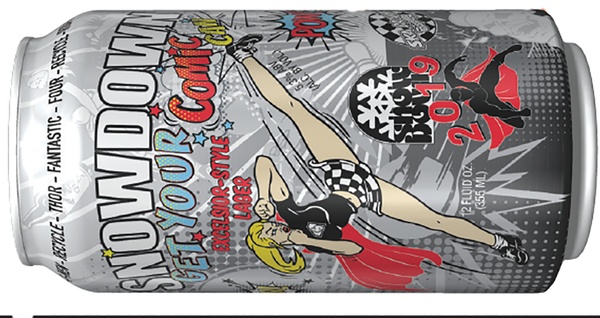 New Year’s Eve just doesn’t seem as wild as it did a decade or more ago. Gone are the days of slamming Ja?germeister shots or powering through Das Boot filled with Zima and Goldschla?ger. Come to think of it, how come so many trendy douchebag liquors have umlauts in their names?

Monday night found me sitting in front of the fireplace as the snow piled up outside my house. Opening faceoff of the Avalanche/Kings game was minutes away, so I grabbed a bomber of Steamworks’ Spruce Goose out of the beer fridge. I’d been saving it for a snowy day, and the fragrant scent and bitter finish of the spruce tips wafted out my nose with each sip. At 7.9 percent ABV, it jump-started my evening much more quickly than the Avs’flailing power play.

Next up was the last leftover growler of BREW from the KSUT holiday party ... 64 oz. of Idris, a toasty, malty, crisp amber ale. That’s four pints in layman’s terms. Fortunately, his ABV was just 4.5 percent. By the time I pulled my last sip, the Avs had fallen 3-2 in overtime.

I still had hours to go until the clock struck midnight and finished with a couple of canned beers from some of my favorite western breweries: Avery IPA, which ranks highly in most national rankings of that particular style; and Melvin’s Hey Zeus! Mexican logger, finished with a fat squeeze from a lime wedge.

Six hours. Eight beers. I wouldn’t have a hangover, would I?

7:45 a.m. came quickly. It felt like someone had struck me between the eyes with an ice pick and my mouth was as dry as could be. During the night, I’d slammed a couple of Nalgene bottles worth of water but was as parched as the Sonoran Desert when I stumbled into the kitchen.

New Year’s Day means cooking around the Aaland household. In some years, it’s black-eyed peas with ham hocks. Other years is a bean and ham soup. 2019 called for posole rojo. I stocked up over the weekend on dried hominy, red chile pods, onions, garlic and a big pork shoulder roast.

I was sober enough to remember to soak water overnight. After cooking a breakfast of sausage, potatoes, fried eggs and green chile, I retired to the sofa to research traditional New Mexican recipes for posole. The joy of the internet is bouncing from one stream of thought to the next ... hangovers help with such random searches.

Pozole, as it’s usually spelled in Mexico, is derived from the Nahuatl language, meaning “frothy soup.” The ancient Aztecs boiled meat and hominy from the sacred maize plant with dried chiles and herbs. The preferred meat was the human flesh of prisoners, recently sacrificed by having their beating hearts ripped from their bodies at least according to the internet). It made sense in a macabre sort of way, since the Aztecs believed the gods created humans from masa.

Since the Conquest banned cannibalism, human flesh was replaced with pork – a favorite of the Spanish conquistadors. Other European ingredients like garlic and onions were added, and the stew evolved into what we now know as posole here in the American Southwest. Three varieties are popular in Mexico and adjacent regions: blanco, verde and rojo. In New Mexico, rojo is king.

Posole is a tedious dish when cooked authentically. The chile pods must be rinsed and seeded, reconstituted in boiling water, fried with garlic in lard or bacon fat, and blended until fine. The pork shoulder gets cut into bite-size cubes and browned, then added to the red chile and water. Next, onions and garlic are saute?ed and added. Spices like bay leaves, cumin, Mexican oregano, garlic powder and onion powder find their way into the mix. My secret ingredients are beef and chicken bouillon and a fat tablespoon of molasses for balance.

The main ingredient is time. Reduce heat from boiling to a simmer and let sit all day long on the burner. The finished product killed the hangover like so many sacrificial prisoners. Best of all, good luck for another year is on its way.

New year, new beer! Snowdown is a month away, so the time has come for our friends at Ska to release the official 41st annual Snowdown beer, ComicCan. Technically speaking, it’s the 24th official Snowdown beer. The first 17 years of Snowdown didn’t have an official beer because the craft brewing craze wasn’t a thing yet. Back in the ’80s, we had to rely on Coors Light and powder drugs to weather Snowdown ... or so I’m told. The style of this year’s beer is a mystery, with the big reveal at 5 p.m. Friday at the World Headquarters. Costumes are encouraged at the jovial affair. The theme of Snowdown 2019 is “Get Your ComicON!” Durango’s annual winter bacchanal runs from Wed., Jan. 30 through Sun., Feb. 3.

But why stop at one new beer? After all, this isn’t Utah! Steamworks taps its January firkin at 3 p.m. Friday when it rolls out barrels of My Other Car Is a Unicorn at both its downtown brewpub and the beach at Purgy’s. “We’ve jumped on board with the latest trend in IPAs by brewing a New England or ‘juicy/hazy’ style IPA,” head brewer Ken Martin said. “These beers have a lower perceived bitterness than traditional IPAs, but are heavy-handed in the flavor and aroma hops. The hop varieties used are known for lending tropical fruit flavors and aromas to the beer rather than the usual citrusy or spicy/piney characteristics.” Complementing the hops is an unusual accomplice. “We added a mango puree to each of the New England IPA firkins, and we’re hoping for a tropical fruit delight in the dead of winter,” Martin’s partner-in-crime, Spencer Roper, said.

Don’t get bent out of shape from 6-8 p.m. Friday when you can’t find a seat at Durango Craft Spirits. That’s because the Badly Bent duo of Patrick Dressen & Mark Epstein will hold court. More than a decade ago, Durango’s premier bluegrass quintet won the Telluride Bluegrass band competition. Dressen and Epstein were driving forces in the classic version of the Badly Bent that produced a couple of CDs and got to perform on the mainstage before nearly 10,000 fans.

He came dancing across the water? Email me at chrisa@gobrainstorm.net.