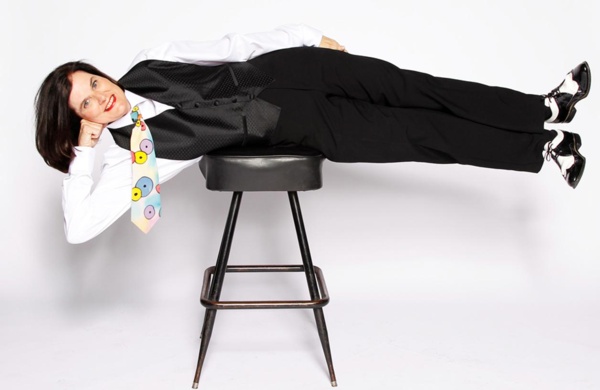 Expect lots of levity as Paula Poundstone returns to the Concert Hall this Friday night.

With summer waning, the local concert calendar starts to fill up this week. The second annual iAM MUSIC Fest takes place at a variety of downtown venues tonight (Thurs., Aug. 18) through Saturday. Founded by Hello Dollface, in just two years, the event has become one of Colorado’s top independent music festivals. It features national, regional and local indie acts from the rock, folk, funk, soul, hip-hop and world music genres. Local performers include the Cannondolls, Imaginario Circus, Afrobeatniks, Eldergrown, Ace Revel, Chava People and, of course, Hello Dollface. Artists from outside Colorado are also on the bill, including Captain Squeegee (metaphysical rock from Phoenix), Disco Organica (Oregon-based disco jazz funk), VE (Los Angeles hip-hop), Miller and the Other Sinners (blues/gospel from Upstate New York), and more. And iAM MUSIC Fest is a complete sensory overload: yoga on the side of the stage during didgeridoo, spoken word and live art performances, beer and cocktails, workshops and more. Single-day Friday and Saturday passes are available, as are three-day weekend passes.

iAM MUSIC is a nonprofit that educates students of all ages with the purpose of building a conscious, positive society through the power of music. It’s not band camp. Rather, it teaches prospective musicians the business side of things, empowering students with the skills necessary to be successful on their own musical journey, starting locally.

Durango Massive gets all folksy tonight by presenting Nashville’s hardest working singer/songwriter, Jim Lauderdale, at 7 p.m. at the Animas City Theatre. He’s released a whopping 27 albums since his 1991 debut, spanning the genres of country, Americana, bluegrass and more. He’s collaborated on full-length records with the late Ralph Stanley, Grateful Dead lyricist Robert Hunter, jam band innovators Donna the Buffalo and fellow folkie Buddy Miller. Lauderdale’s tunes have been covered by the likes of George Strait (nine times, in fact), Elvis Costello and the Dixie Chicks, while his recent recordings enlisted members of the North Mississippi Allstars. In his spare time, he’s the weekly host of “Music City Roots” on KSUT (Thursdays, 10 ’til midnight). Local singer-songwriter Tyller Gummersall opens, and will likely feature tunes on his latest record, “Long Ride Home,” which was produced by Texas legend Lloyd Maines.

The R. Carlos Nakai Quartet brings its Native American, jazz and new age to the Durango Arts Center at 7:30 p.m. Sunday. Thirty of Nakai’s albums have been preserved in the American Folklife Center in the Library of Congress. His “Earth Spirit” and “Canyon Trilogy” albums are the only Native American recordings to be certified gold and platinum.

Comedienne Paula Poundstone, one of the stars of NPR’s hit game show “Wait Wait … Don’t Tell Me,” returns to the Community Concert Hall at 7:30 p.m. Friday. Named one of the “100 Greatest Stand-Ups of All-Time” by Comedy Central, Poundstone usually packs them in. Her razor-sharp wit, spontaneity and willingness to delve into her own bag of neuroses make her someone that the audience can easily identify with.

KSUT’s fall “Hit It & Quit” fund drive gets started this week with earlybird pledging for a VIP package to the 21st annual Four Corners Folk Festival over Labor Day weekend. One lucky winner will be drawn Thurs., Aug. 25, to win a pair of patron passes along with side-stage grub and grog, lodging, and massages and soaks. Rather than heavy on-air pitches, the station will rely on a single day of soft pitching, social media, e-blasts and web marketing. Two weeks later (Thurs., Sept. 8), the second earlybird drawing will send one listener member to Telluride Blues & Brews and another to Pickin’ in the Pines in Flagstaff.

With a career spanning 27 albums, here are some highlights from Jim Lauderdale’s career:

1. “Buddy & Jim,” 2012. While Buddy Miller and Lauderdale have collaborated numerous times, this gem was a highlight in both of their catalogs. The subsequent tour brought them to Telluride during 2013’s The Ride.

2. “I Feel like Singing Today,” Lauderdale with Ralph Stanley, 1999. Nominated for a Grammy, it’s simply one of the finest recordings of classic bluegrass in the past 20 years.

3. “Headed for the Hills,” 2004. Lauderdale teamed with Grateful Dead lyricist Robert Hunter for a folksy, bluegrassy set that fit right alongside “American Beauty” and “Workingman’s.”

4. “Soul Searching,” 2015. This two-disc set – Lauderdale’s most recent work – is full of fat Memphis horns and dirty, boozy fills from the North Mississippi Allstars. One disc pays homage to the sounds of Nashville, the other to Memphis.

5. “The Bluegrass Diaries,” 2007. This one garnered a Grammy for Best Bluegrass Album. A few months after the win, he graced the stages of the Durango Bluegrass Meltdown.

Met Jesus in a bar? Email me at chrisa@gobrainstorm.net.