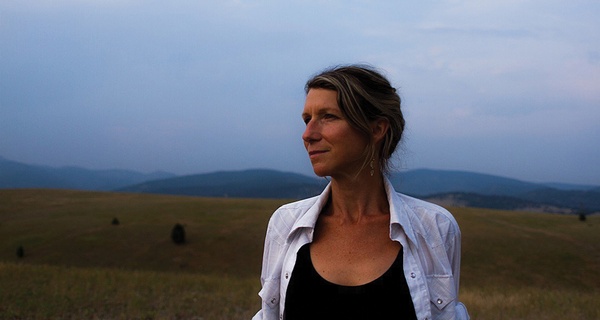 When did you first discover Martha Scanlan? For me, it was around 2001, when her old-time bluegrass outfit, Reeltime Travelers, began appearing on the festival circuit, playing the old Silverton Jubilee, the Durango Bluegrass Meltdown, Telluride Bluegrass and RockyGrass. In the span of two years, they released a pair of critically hailed albums and emerged at the forefront of the burgeoning string band revival, alongside such acts as Old Crow Medicine Show,

Foghorn Stringband, Freight Hoppers and, closer to home, Sweet Sunny South. A song on the soundtrack to “Cold Mountain” seemed to cement their reputation and point to bigger and better things. Unexpectedly, they broke up, leaving behind a recorded output of just 30 songs.

Scanlan was always the group’s resident sage, penning songs like “Hallelujah,” “Little Bird of Heaven,” “Raven” and “Higher Rock,” bringing something new to an old-time scene where most tunes were traditional readings of Appalachian standards. The freedom of a solo career meant Scanlan could release albums filled with her award-winning songs, whereas Reeltime records contained just two or three. “The West Was Burning” dropped in 2007 and signaled Scanlan’s transition from old-time singer to full-on Americana powerhouse. Comparisons to Gillian Welch were made by the music press. A sparse 2011 EP called “Tongue River Stories” was next, followed by a second full-length record in 2015, “The Shape of Things Gone Missing, the Shape of Things to Come.” By this time, she was collaborating with Amy Helm (daughter of the Band’s Levon Helm, who drummed on Scanlan’s solo debut) and members of the Decemberists and Black Prairie. Guitarist Jon Neufeld left Black Prairie to become Scanlan’s musical partner, and they’ve been inseparable ever since.

Scanlan’s new album, “The River and the Light,” travels further down the indie-rock road, with Neufeld’s electric guitars replacing the acoustic instruments that once accompanied her. Don’t think it’s a blaring, rock & roll affair, though. Scanlan’s voice is barely a whisper at times, with the spooky guitar adding ambient backing to her words. The duo returns to the Henry Strater Theatre at 7:30 p.m. Friday in the first KSUT concert of 2019.

If you’re going to dodge avalanches and ski the steep and deep up in Telluride this weekend, you can also catch Grammy-winning Latino band Ozomatli at the Sheridan Opera House at 9 p.m. Friday. The Los Angeles group has been at the forefront of the city’s contemporary Latin scene for nearly 25 years.

The Community Concert Hall hosts world-class jazz at 7:30 p.m. Wednesday, when Delfeayo Marsalis & the Uptown Jazz Orchestra come to town. Delfeayo is one of the famous Marsalis brothers, alongside Branford, Wynton and Jason. A trombonist, bandleader and producer, he toured as a member of bands fronted by Ray Charles, Art Blakey and Abdullah Ibrahim. He’s produced records by his siblings, Branford & Wynton, Harry Connick Jr., and the soundtrack to Spike Lee’s “Mo Better Blues.”

The post-rock duo El Ten Eleven visits the Animas City Theatre at 10 p.m. Friday. Formed in the Silver Lake community of Los Angeles in 2002 by bassist and composer Kristian Dunn and drummer Tim Fogarty, they’re touted as one of the best instrumental bands around by the likes of Spin magazine and the Dallas Observer. Now 10 albums into their career, El Ten Eleven (their name taken from the L-1011 aircraft) has weaved through experimental music from ambient to math rock to indie rock. Rock/funk/blues outfit the Missing Lynx opens.

Eufo?rquestra returns to the ACT at 9 p.m. Saturday. The Fort Collins-based world/funk/jam outfit has an immensely loyal following in these parts, thanks in part to nonstop touring and records  like “Soup” and “Fire.” The latter features assistance from members of String Cheese Incident, the Motet, John Brown’s Body and more. Dozens of local concerts and festival appearances have introduced the band to countless new fans. Pherkad opens.

Auditions for the fourth annual Durango Voice, a fund-raiser for Manna, take place from 7-10 p.m. Saturday at the Henry Strater Theatre. Local singers of all ages will compete for a chance to strut their stuff at the Durango Voice finals Sat., April 6, at the Hank.

The ACT hosts the multimedia event “Live: Road to the Stage” at 7:30 p.m. tonight that incorporates aerial and circus acts with short video documentaries. Ten artists are collaborating to tell their stories of how they get ready for a performance. Each artist’s act is preceded with video documentation highlighting the behind-the-scenes stories about fantasy and fear, power and sadness, rehearsal and financial struggles, production and money, and hurdles and successes. Performers include RubiStarr & Vanessa Sirois (Secret Circus Society); PorterBleu; Emma Boone; Cadence Croll; Piper Lang; Ayla Falk; Willow Lott; Jesse Shavel; and the event’s producer, Val Russell.

The San Juan Symphony’s Energy in Action season continues with “Fantasy and Fairy Tale,” featuring symphonic storytelling on an epic scale at 3 p.m. Sunday at the Community Concert Hall. Familiar showpieces include Ravel’s “Mother Goose Suite” and “Tales of the Arabian Nights.”