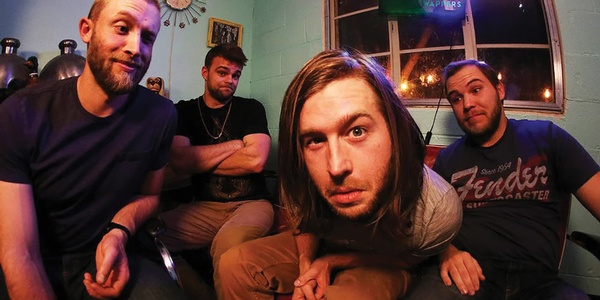 Local funk is on tap at the Animas City Theatre as PJ Moon & the Swappers share a bill with J-Calvin on Friday night.

I spend quite a bit of time on Twitter. I must admit, most of it is to see what the Deplorables have to say about Mango Mussolini’s latest misadventures. This week’s highlight: a rant about how Maximum Security’s disqualification at the Kentucky Derby could only happen in these politically correct times. Talk about Maximum Insecu-

rity! El Pendejo Naranjo dropped the C in the state’s name, spelling it “Kentuky.” One thoughtful troll noted that Kentucky lost its C at the Bowling Green Massacre.

My other guilty Twitter pleasure is reveling in the success of my chosen sports teams – namely, the Avalanche and Nuggets, two young squads with limited playoff experience. Regardless of the eventual outcome (I wrote my column Tuesday morning, so much will have happened by the time you read this), this spring’s success points to a bright future next season and beyond. The Avs are 3-0 in overtime, the most recent being Monday’s thriller that ended with 20-year-old Cale Makar keeping the puck alive in the San Jose zone and finding a wide-open Gabriel Landeskog (an old-timer at age 26) in front of the net for the game-winning goal. Three nights earlier, 24-year-old Nikola Jokic of the Nuggets logged a record 65 minutes in a four-overtime classic while notching a triple double in a heartbreaking loss.

But today’s Twitter revelation was one that declared New Jersey the music capital of the world due to its Mount Rushmore of icons that included Bruce Springsteen, Frank Sinatra, Whitney Houston and ... drumroll, please ... Jon Bon Jovi? I mean, I wore out my “Slippery When Wet” cassette back in 1987 like the rest of you. I was on the bandwagon long before, when “Runaway” was Rocking the Rockies on KBPI.

Twitter exploded. One guy compared this to the real Rushmore housing the granite faces of Washington, Jefferson, Lincoln and Gerald Ford. I immediately laughed out loud, wondering if Kip Winger’s mug would adorn Colorado’s Mount Rushmore of Music.

I asked myself, “Who would be on Durango’s Musical Mount Rushmore?” Two names instantly came to mind. Cy Scarborough, the 90-something-year-old founder of Bar D Wranglers was a no-brainer. Erik Nordstrom of Lawn Chair Kings and Farmington Hill fame was also an easy pick of mine. But who else? Bluesman Kirk James? Guitar wizards Robin Davis and Gary Cook? The sultry sax of Jeff Solon? The musical triple threat known as Patrick Dressen? The dearly departed Greg Ryder? Discuss amongst yourself. I need more time to meditate on this.

Sadly, all good things must come to an end. The StillHouse Junkies were born at Durango Craft Spirits, rising from a stinking pile of Chuckles’ spent mash not too long ago. They were weaned on the teat of a copper kettle, honed their craft under the influence of Mayday Moonshine and grew into a funky bluegrass power trio. This summer, they’ll undertake real touring across the country, culminating with an appearance at the Grey Fox Music Festival in the Catskill Mountains alongside the big boys and girls of bluegrass. While Durango Craft Spirits served as a righteous incubator, they’ve outgrown it. The Junkies have just two more shows left in their residency at DCS, starting with one at 7 p.m. Friday. Just make sure you drink enough Old Fashioneds to request their loving, jam-grass cover of Asia’s “Heat of the Moment,” sung all high-and-lonesome by Alissa Wolf.

Durango’s other favorite band, Lawn Chair Kings, are now a rockabilly trio, featuring founding fathers Nordstrom on his Gretsch Electromatic guitar and Dan Leek on upright bass and the versatile Dressen behind the drum kit. They’ll play the Mancos Bloom Fundraiser Saturday afternoon at Mount Lookout Grange. The event runs from 3-7 p.m., with LCK taking the stage at 4. It’s the Grange’s fifth annual May Pole fundraiser, with local food, local drink and fun for the entire family.

Local funk is on tap at the Animas City Theatre Friday night, as PJ Moon & the Swappers and J-Calvin share a bill. Bandleader PJ Moon searched for a troupe of musicians who could help him realize his dream of making new, modern rock and soul with relevant lyrics on top of innovative rhythm and melodies back in 2017. He hooked up with a diverse team of jazz, blues, indie and funk players who originally “swapped” out every few shows and later settled on his core quartet. Around that same time, the five members of J-Calvin brought their unique and varied musical backgrounds together. The result is a soul-abducting fusion of authentic lyrics, jazz-influenced harmonies and Dilla-inspired beats. Both groups have since taken their live act far and wide.

I guess springtime is officially here, as the outdoor Ska-B-Q season kicks off at 5 p.m. tonight with a performance by the Wild Roses. Indoor Ska-B-Qs are like showering in your underwear and a wool sweater. Free the music ... Let it bounce off Smelter Mountain! In all seriousness, a cold Mexican Logger never tastes better than in Ska’s outdoor beer garden.

The Met: Live in HD wraps up for the season with something contemporary when it screens Francis Poulenc’s “Dialogues des Carme?lites” at 10 a.m. Saturday in the Vallecito Room of FLC’s Student Union. Run time is 3 hours, 9 minutes with a single intermission. Considered by critics and fans alike, Carme?lites is one of the most successful operas of the later 20th century, having premiered in 1957 in Milan. The opera focuses on a young member of an order of Carmelite nuns – the aristocratic Blanche de la Force – who must overcome a pathological timidity in order to answer her life’s calling.

Of note: The Black Velvet trio plays the Balcony Bar & Grill at 5 p.m. tonight before returning to the Diamond Belle Saloon at 5:30 p.m. Monday; The Starlight’s Plursday local music showcase features DJ Zirk from 8 ’til close tonight; Robbie Overfield performs at the Starlight from 6-9 p.m. Friday; Bad Goat Disco spins funk and soul-infused dance music from around the world from 7-10 p.m. Friday at the 11th Street Station; DJ Hakan returns to the Starlight from 9 ‘til close Friday; DJ Side Affex closes down the Starlight at 9 p.m. Saturday.

You catch a pearl and ride the dragon’s wings? Email me at chrisa@gobrainstorm.net.