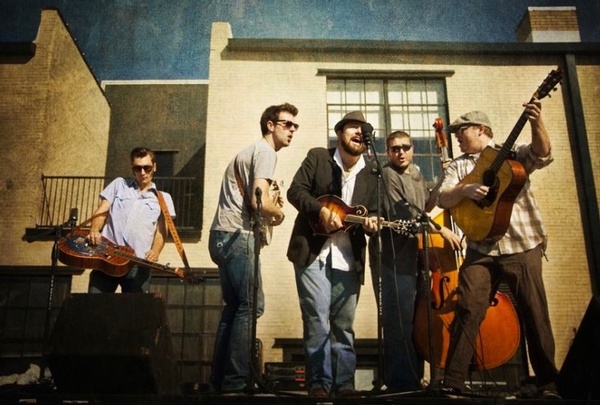 The HillBenders put their own twangy twist on the Who's "Tommy" this Thurs., April 13, at the Concert Hall.

It’s a busy week so let’s just get right to it. One of bluegrass music’s rising stars, the Lil’ Smokies, comes to the Animas City Theatre at 9 p.m. Sunday. Winners of the 2015 Telluride Bluegrass Band competition among other national contests, local fans got to see them the past two years in Town Park and last summer at the Pagosa Folk’n Bluegrass Festival. The Montana-based sextet packs some serious energy into their originals and covers.

Ken Waldman mixes old-time music and poetry at the Community Concert Hall at 7:30 p.m. Saturday in the latest of the venue’s “Artists You Need to Know” series. Waldman, who began playing fiddle in 1981, uses music as a backdrop to share poetry and tales about the tunes and his own life. And tales he has: in 1996, he survived a plane crash in remote Alaska. He’s a past college professor who has published six full-length poetry collections, a memoir and a children’s book, and nine CDs.

Fatalist hip-hop comes to the ACT in the form of Mickey Avalon & Dirt Nasty at 9 p.m. Wednesday. Avalon’s life plays out like an episode of “Behind the Music.” His father died in a drunk driving accident and his sister overdosed on heroin. He supported himself as a kid selling pot on the streets of Hollywood, later becoming an addict himself. He returned to L.A. committed to cleaning up his act and pursuing a life in music. He befriended former MTV VJ Simon Rex (aka Dirt Nasty) and the rest is history.

Steamworks will capture the spirit of spring break on the beach with a coconut, pineapple and rum wit, dubbed Spring Break ’89 for this month’s Firkin Friday (the keg gets tapped at 3 p.m.). The base of Spring Break ’89 is Steamworks’ One Wit Wunder, an unfiltered Belgian white ale, spiced with coriander and orange peel. “We toasted coconut and then flamed it off with a bit of dark rum,” said brewer Spencer Roper. “This tasty treasure was then added to the wit in the firkin along with a bit of pineapple juice.”

Congratulations are in order for Michael & Amy McCardell and Durango Craft Spirits. On Tuesday, Mayday Moon-shine won Best of Class, Best of Category and a gold medal at the 11th annual American Distillers Institute awards in Baltimore. The largest gathering of distillers in the country, entrants from 44 states and 18 countries competed.

Music in the Mountains hosts its 2017 festival season benefit event, Cocktails with the Conductor, from 6-8 p.m. Saturday at the Sorrel Sky Gallery. Music director and conductor Guillermo Figueroa will reveal the festival concerts and guest musicians. Plus, there’s a music ensemble auction, hors d’oeurves, wine and this year’s signature martini. Tickets cost $50 per person.

The San Juan Symphony goes “Full Throttle With Frautschi,” celebrating the grand finale of its 31st season at 3 p.m. Sunday at the Community Concert Hall. Two-time Grammy-nominated violinist Jennifer Frautschi makes her SJS debut in Tchaikovsky’s monumental “Violin Concerto,” a passionate and fiery work once deemed too difficult for performance. Channeling Frautschi’s energy, SJS musicians become the soloists in Bartok’s triumphant “Concerto for Orchestra,” a masterpiece that showcases the agility of the orchestra and paints a folksy portrait of modern music.

It’s still a week out, but circle Thurs., April 13 on your calendars as the HillBenders present The Who’s “Tommy” in the high-and-lonesome bluegrass style at the Community Concert Hall. The original version of “Tommy” ranks among my Top 10 classic albums of all-time. I made a pilgrimage to Kansas City in ’89 to follow The Who across the country for a week ... and the fact that they opened with nearly 45 minutes of Tommy was among the reasons I did so. La La Bones opens.

Elsewhere: the Pete Giuliani Band plays a family friendly dance at the Animas Valley Grange at 7 p.m. Saturday (located on County Road 203 about a mile north of Trimble Hot Springs); and Black Velvet has a pair of gigs this week, first as a trio at the Derailed Pour House from 8 ‘til midnight Friday, then as a duo from 5:30-10 p.m. Saturday at the Diamond Belle Saloon.

Festival season is just a couple of weeks away, with the 23rd annual Durango Bluegrass Meltdown rolling into town (April 21-23). This week’s Top Shelf list looks a little further north and a few months down the road. The lineups for several Telluride festivals have been announced in the past several weeks. In case you missed these, here’s a refresher:

and the John Butler Trio are the big names. Dig a bit deeper into the lineup and see some of my personal favorites like Rival Sons, the Marcus King Band and Muddy Magnolias.

Buy a hundred pounds of yeast and some copper line? Email me at chrisa@gobrainstorm.net.