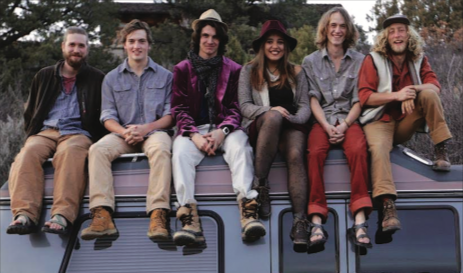 A rising star on the local scene, Liver Down the River floats into the Animas City Theatre at 9:30 p.m. Fri., March 23.

The level of talent of the Durango music community dawned on me during last week’s spring membership drive, as Liver Down the River, the StillHouse Junkies, Caitlin Cannon & the Cannondolls, Kirk James and Lacey Black all performed KSUT sessions live in our studio. Sure, I’ve written about all of them countless times in my column, but typically it was in the quick listing of other happenings at the end of the column. And, yes, I’ve seen them all live before. I knew they were talented. Rather than words, chords and beats, I’m talking about the other stuff that bigger, national bands don’t have to sweat ... choreographing a social media blitz for every performance (including radio appearances), hauling your own gear, setting up your own sound check and simply taking time off work to do a radio appearance. Local acts have to be hungry. And three of them get busy this week.

Take Liver Down the River, for example. They played an opening set for the Lil’ Smokies the night before in Crested Butte, piled into a van in the morning and drove six hours to Ignacio for a mid-afternoon set. They’ve recently changed some members, with drummer Cy Fontentot and keyboard player Tyler Smith joining longtime members Emily Winter (fiddle, vocals), Patrick Storen (mandolin), Dylan Runkel (guitar, vocals) and Derk Ebt (bass). They filled KSUT’s tiny break room that doubles as an impromptu live radio performance area with a funky, grassy energy that’s rare.

Since 2015, they put out an eponymous, five-song EP, a full-length studio album, “Life You Love,” and are set to drop their first double-live set, “Where’s Your Liver, Vol. 1.” They’ll release it in digital format this Friday, which coincides with an Animas City Theatre homecoming at 9:30 that same night. Liver is one of those rare local bands that’s on the brink of breaking on the national level. They’ve already shared the stage with the likes of Billy Nershi of String Cheese Incident and Tony Furtado and played a host of regional festivals. With a sound that weaves in and out of bluegrass, funk and rock not unlike SCI or Leftover Salmon, there’s certainly a built-in audience for them. From what I saw earlier this week, they have the right moxie to succeed.

The StillHouse Junkies seemingly play a local gig every other night. The quartet of Bruce Allsopp (resonator guitar, vocals), Fred Kosak (mandolin, guitar, vocals), Alissa Wolf (fiddle, vocals) and Cody Tinnin (upright bass, vocals) has three gigs this weekend: their usual 5:30 p.m. Friday afternoon affair at Durango Craft Spirits; an 8 p.m. Saturday gig at the Dolores River Brewery; and an opening slot for the Lil’ Smokies at 8 p.m. Sunday at the ACT. Their sound is based in bluegrass but regularly drifts into folk, country, blues and Americana territory. Their debut album is in its final mastering stage and should be ready for release by next month’s Durango Bluegrass Meltdown.

Speaking of the Lil’ Smokies, they’ve blown up the past several years since winning band competitions at the Northwest String Summit and Telluride Bluegrass in 2015. Their eponymous 2013 album and last year’s follow-up, “Changing Shades,” have become staff favorites at KSUT. Through regular appearances at FolkWest festivals up on Reservoir Hill in Pagosa Springs and the occasional ACT gig, they’ve built a local following through their energetic live performances.

StillHouse Junkie fiddler Alissa Wolf doesn’t limit herself to just one band. She’s also a member of the all-female alt-country trio, the Cannondolls, who open for Americana powerhouse Eilen Jewell at 7:30 p.m. tonight (Thurs., March 22). Fronted by the energetic and charismatic Caitlin Cannon, the trio relies on the pitch-perfect harmonies of cajon player Kate Willyard and Wolf’s melodic fiddling to captivate the listener in a sultry ballad or a raucous rocker. Tickets are moving fast for this one: at the start of the week, fewer than 30 remained.

The headliner, Eilen Jewell, is someone I’ve been fortunate to book for local gigs three times, first as an opener for Canadian singer/songwriter Fred Eaglesmith a decade ago. Her lengthy career on the New England label Signature Sounds has allowed her to explore classic country (her “Eilen Jewell Presents Butcher Holler: A Tribute to Loretta Lynn” is one of my favorite CDs); gospel (she’s a member of the Sacred Shakers); and, most recently, blues, swing and jump blues on her latest record, “Down Hearted Blues,” which made my Best of 2017 list a few months back.

Big Something brings its winter tour to the ACT at 9 p.m. Tuesday. The six-piece powerhouse plays a timeless yet original blend of rock, pop, funk and improv that’s fueled by soaring guitars, synth, horns and alluring vocals. Little Wilderness opens the show.

The Live as One: One Vibration 2018 Pre-Party comes to the ACT at 9:15 p.m. Saturday, featuring Bass Physics and an undercard of Krunkle Tom, Squoze and Mtn. Menace. Bass Physics is the Denver-based producer named Arja Adair, whose impassioned sound emulates a revolutionary style of electronic music, fusing rock, funk, hip-hop and melodic bass.

Elder Grown lends its funkalicous roots music to the Village Aid Project that sends FLC students abroad to help developing communities build water, sanitation and hygiene systems. A fundraiser is slated for 7 p.m. tonight at the Community Concert Hall. The Lawn Chair Kings will put the party into Byron Turner’s 50th birthday bash at 7:30 p.m. Friday at the Henry Strater Theatre. The public is invited to boogie down with Dan, Patrick, Hap and the Nord, while passing along best wishes to Old Man Turner.

The best thing I’ve heard this week isn’t a new record but rather the KSUT in-studio performance by Liver Down the River this past Monday. I had the pleasure of hosting the interview, so a thin pane of glass and a few feet were all that separated us. They delivered a 40-minute on-air jam that rejuvenated us. Membership drives are arduous affairs and staff members and volunteers were on their sixth day of sunrise-to-sunset fundraising. Liver delivered the righteous noise. There’s a lot of great music coming to town this week, but some of the best will be played by our friends and neighbors.

Cookin’ is a pleasure and singin’ is a treasure? Email me at chrisa@gobrainstorm.net.