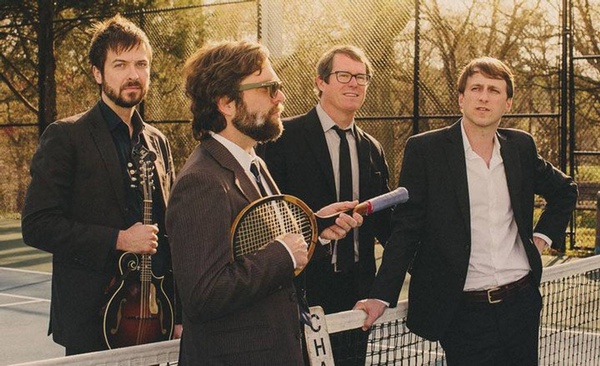 Chatham County Line rolls into the Four Corners this coming week with back-to-back-to-back nights in Durango, Dolores and Cortez on Tuesday through Thursday.

“More cowbell!” Will Ferrell famously shouted in a “Saturday Night Live” skit. Well, dust them bells off because Grand Funk Railroad comes to the Sky Ute Casino Resort at 8 p.m. Saturday on its 50th anniversary tour. Formed in Flint, Mich., in 1969, Grand Funk gave us such timeless classics as “We’re an American Band,” “Closer to Home,” “The Loco-Motion” and “Some Kind of Wonderful.” Two of the group’s founding members – Don Brewer (drums and vocals) and Mel Schacher (bass) – are still driving that train, along with former members of .38 Special, Kiss and Bob Seger & the Silver Bullet Band.

One of my favorite bands, Chatham County Line, rolls into the Four Corners this coming week for back-to-back-to-back nights in Durango, Dolores and Cortez on Tuesday through Thursday. Chatham is no stranger to Durango, being veterans of the Meltdown, Concert Hall and DSCPA. The one-time RockyGrass band competition winner has built a solid career blending bluegrass and Americana driven by instrumental prowess and introspective lyrics. Singer/guitarist Dave Wilson is an award-winning lyricist, while Chandler Holt (banjo), Greg Readling (upright bass) and John Teer (mandolin, fiddle) steer the  ship through bluegrass, country, folk and rootsy rock waters. Since 2003, they’ve released eight studio records and a couple of live albums, most on the Yep Roc imprint, one of the tastiest indie labels in America. Their latest album, “Sharing the Covers,” pays homage to their musical heroes like Tom Petty, the Rolling Stones, John Lennon, Wilco, John Hartford, the Stanley Brothers and the Louvin’ Brothers.

What bums me out about Chatham’s run through Southwest Colorado is that it’s the same week as Telluride Bluegrass and Town Park camping opens this weekend. That means some of their most diehard fans will be out of town. Chatham will kick things off at 7 p.m. Tuesday at the Henry Strater Theatre, then follow up that performance at 8 p.m. Wednesday at the Dolores River Brewery and 5 p.m. Thurs. (June 20) at the Third Thursday Downtown Market in Cortez. With any luck, I’ll be at the Hank before departing for my 23rd straight Telluride Bluegrass the next morning.

Yeah, Telluride Bluegrass ... loved by many, feared by many others. It’s our biggest regional festival that officially starts a week from today (Thurs., June 20). Unofficially, though, it begins with the free FirstGrass concert at Sunset Plaza in Mountain Village from 5-8 p.m. Wednesday. This time around, FirstGrass features the Jon Stickley Trio followed by the jam-friendly quartet of Ben, Adam, Andy & Mojo. Any festivarian will recognize Ben and Adam as the bassist and guitarist, respectively, from Yonder Mountain String Band, Andy as the banjo wizard from Leftover Salmon, and Mojo as the guitarist from the Sam Bush Band. Strings will be shred for sure. Later Wednesday, the esteemed Mr. Thorn will join his bandmates in Leftover Salmon for the first NightGrass concert at the Telluride Conference Center. A handful of tickets may still remain for that one.

If you’re showing up extra early to Telluride and one of those lucky few with Town Park camping, you might want to check out  the Jacob Jolliff Band at the Sheridan Opera House at 9 p.m. Friday. Jolliff is best known as the mandolin shredder for Yonder Mountain, and his quartet is pure instrumental bliss.

Speaking of freebies, the first in the Concert Hall @ The Park series brings Baracutanga back to town at 5:30 p.m. Thursday. You know the drill: show up with lawn chairs, picnic baskets, blankets and your dancing shoes and catch a couple hours of live music each Thursday through Aug. 1 (with the exception of July 4, which will see plenty of entertainment downtown that day).

As always, Alpine Bank generously sponsors the series. Baracutanga is a seven-piece band with members who hail from Bolivia, Ecuador, Peru and the United States. They arrange traditional South American rhythms in new and interesting ways, such as huayn?o and cumbia with Middle Eastern darbuka, Afro-Cuban bata, Afro-Peruvian festejo and more.

Prohibition Herb and the Animas City Theatre are teaming up for an epic Battle of the Bands, spreading out the preliminaries over three nights in three months (the first is this Saturday, with the next two preliminaries July 20 and Aug. 17). Each night’s winner will then perform Sept. 21, with the ultimate champion claiming $1,000 in prizes. The bands submitted demos, bios and stage plots earlier this spring, with 12 earning spots in the battle. This week’s contestants include the Ameri-Kiwi group, Playing with Skunks; a dark metal act, Six Minute Suicide; the Latin funk trio, Profetic Calaveras; and Nil, which bills itself as a psychedelic group that features monolithic riffs and crushing grooves. Doors open at 7:30 p.m., with music starting an hour later.

You know summertime is here when Lawn Chair Kings return to the Balcony, which they’ll do from 5-9 Friday night. This year, they’re a lean, mean, power trio with Erik Nordstrom (guitar), Dan Leek (bass) and Patrick Dressen (drums).

Big band era music comes to the Hank at 6:30 p.m. Monday with Swing Night featuring John Rubio & Power Lounge and an opening set by students from iAM Music and Stillwater.

The Durango Business Improvement District (BID) is launching a free Friday Outdoor Movie Night on the lawn at the Durango Recreation Center. Show up with your blankets and lawn chairs by 8:30 p.m. each Friday for seating, with the movie to start at 9 (or roughly at dusk). Dogs will not be permitted. This week’s movie is “Spiderman: Into the Spider-verse.” Save the dates for future movie nights: July 12 will feature “How to Train Your Dragon – The Hidden World,” with Aug. 9 showcases “Captain Marvel.”

Of note: Rob Webster works tonight’s (Thurs., June 13) Ska- B-Q from 5-7 at the World Headquarters in Bodo Park; the Black Velvet trio returns to the Derailed Pour House at 7 p.m. Friday, while the duo is back at the Animas River Beer Garden at the Doubletree Hotel at 5 p.m. Saturday; ragtime piano returns to the Diamond Belle Saloon at 5:30 p.m. Monday through Saturday with Adam Swanson; and the Blue Moon Ramblers continue their longtime Sunday night residence at the Belle at 5:30 p.m. weekly.

We proceeded to tear that hotel down? Email me at chrisa@gobrain storm.net.