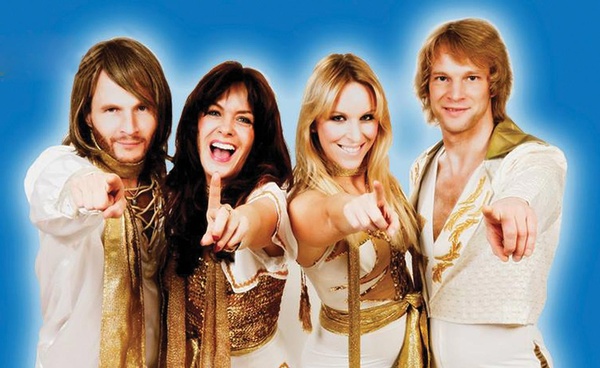 ABBA tribute band Arrival from Sweden returns to the Concert Hall on Tuesday at 7:30 p.m.

It’s a busy week, so let’s get right to it. No fancy lead. No political rants. No words of wisdom. Oktoberfest rolls into Buckley Park this weekend, bringing with it beer, food and music. Tickets cost $5 each day (Durango Double participants and children 12 and under get in free). The Durango Bootlegger’s Society (Animas Brewing, BREW, Carver’s, Durango Brewing, Ska & Steamworks) will be on hand to pour, while the Diabolical Sound Platoon, Cannondolls, Garrett & Callie Jung and Die PolkaSchlingel will perform. Local vendors will provide the grub. Oktoberfest runs from 11-4 p.m. Saturday and 11-3 Sunday.

It’s time to walk the red carpet! Durango Film Fest hosts a unique, fun fundraiser at 5 p.m. Friday called the “Walk of Fame.” This “Hollywood tour” begins at 5 p.m. with champagne at the Rochester Hotel, then splits into groups to travel to BREW Pub & Kitchen, Four Leaves Winery and the Irish Embassy Pub for food, drink and film-based games. They’ll reconvene at the Embassy for a silent auction, coffee, dessert and karaoke. Durangofilm.org is your source for tickets and more information.

A Tribe Called Red, a group that has been called the soundtrack to the contemporary evolution of the powwow, comes to the Community Concert Hall at 7:30 p.m. Monday. Based in Canada, ATCR produces a unique sound that has impacted the global electronic scene and urban club culture. The group blends modern hip-hop, traditional powwow drums and vocals, and edgy electronic music. It is the first indigenous group to win “Breakthrough Group of the Year” at the Juno Awards (the Canadian Grammys).

Do you ever long for the days when disco ruled the earth? The group celebrated internationally as “the most authentic” ABBA tribute band, Arrival from Sweden, returns to the Community Concert Hall at 7:30 p.m. Tuesday. Of course the dance floor will be open. Founded in 1995 in Gothenburg, Sweden, Arrival from Sweden has toured the United States since 2005 with sold-out shows and critical acclaim the norm. They tackle all the classics, from “Dancing Queen” to “Waterloo.” In addition to recreating ABBA’s sound, Arrival from Sweden enlists designer Owe Sandstrom, who created and owns all of the original ABBA stage clothes.

Bobby Messano, who was inducted into the Blues Hall of Fame in 2012, performs at 7:30 p.m. Saturday at Crash Music in the Historic Aztec Theatre. An underground legend, Messano plays as many as 350 shows per year and has appeared on records by the likes of Joe Lynn Turner (Rainbow, Deep Purple) and Clarence Clemmons (Bruce Springsteen & the E Street Band). With six of his own albums, he’s appeared on over 50 major label and indie releases by others, 23 of which have been nominated for Grammys.

The Scrugglers and the Robin Davis Duo bring mighty fine Durango bluegrass music to the Animas City Theatre on Friday (7:30 p.m. doors, 8:30 p.m. show). Following the Davis Duo’s opening set, Robin will sit in on guitar for the Scrugglers the rest of the night.

The Met: Live in HD returns to the Fort, kicking off its 11th season at 10 a.m. Saturday with “Tristan and Isolde.” This four-hour behemoth was called “an audacious new production … compelling and vulnerable” by the New York Times. The three acts of this opera are set, respectively, aboard ship on the Irish Sea, in Cornwall in Southwestern Britain and in Brittany (northwest France). Richard Wagner, who penned the opera, emphasizes several key themes associated with ancient Celtic culture, including mysticism, the magic arts, an evoked warrior code and a distinctly non-Christian vision of the afterlife.

Steamworks celebrates fall with its Caramel Apple firkin, which will be tapped at 3 p.m. Friday. “We use our German brown altbier as a base,” Ken Martin, director of brewing operations at Steamworks, said. “We then added fresh, raw apple cider and a caramel reduction sauce.” German brown altbiers, which originated in the Dusseldorf area of Germany, balance hop and malt flavors and aromas. Before Germans began brewing lagers, they prized their ales. “Alt,” which means “old,” pays homage to this renegade region that resisted the lager revolution.

In other brewing news, Ska holds the official release for its latest offering, Pils World, at tonight’s Ska-B-Q (Thurs., Oct. 6), with liquor stores stocking six packs of cans today as well. BREW’s current offerings include Oktoberfest (a luscious, wonderfully perfect amber lager), Holden (one of my faves, a “Catcher in the Rye Pale Ale”) and  Ilan (a bright, aggressively hopped IPA).

Last week’s Neil Young & Promise of the Real proved to be the real deal. My drive from Durango to Telluride and back through the most awesome fall colors I’ve ever seen was even better. Here are my musical highlights from Friday’s show:

1. Neil’s solo acoustic opening set that saw him switch between piano, guitar and harmonica for crowd favorites like “After the Gold Rush,” “Heart of Gold,” “Long May You Run” and “Comes a Time.”

2. The live debut of four brand new songs: “Hang Gliders,” “Texas Rangers,” “ Peace Trail” and “Show Me” … working titles, since he’s yet to record them. On Saturday, he did “Indian Givers,” a new song protesting the Dakota Pipeline.

3. The 20-plus minute electric assault on “Love and Only Love” (Saturday’s attendees got “Down by the River” for their jam).

4. The blistering grunge of “Rockin’ in the Free World” (which ended the main set) and an encore of “Fuckin’ Up” and “Cinnamon Girl,” all three which showcased Neil’s chops on the Gibson electric guitar.

Red means run son, numbers add up to nothing? Email me at chrisa@gobrainstorm.net.